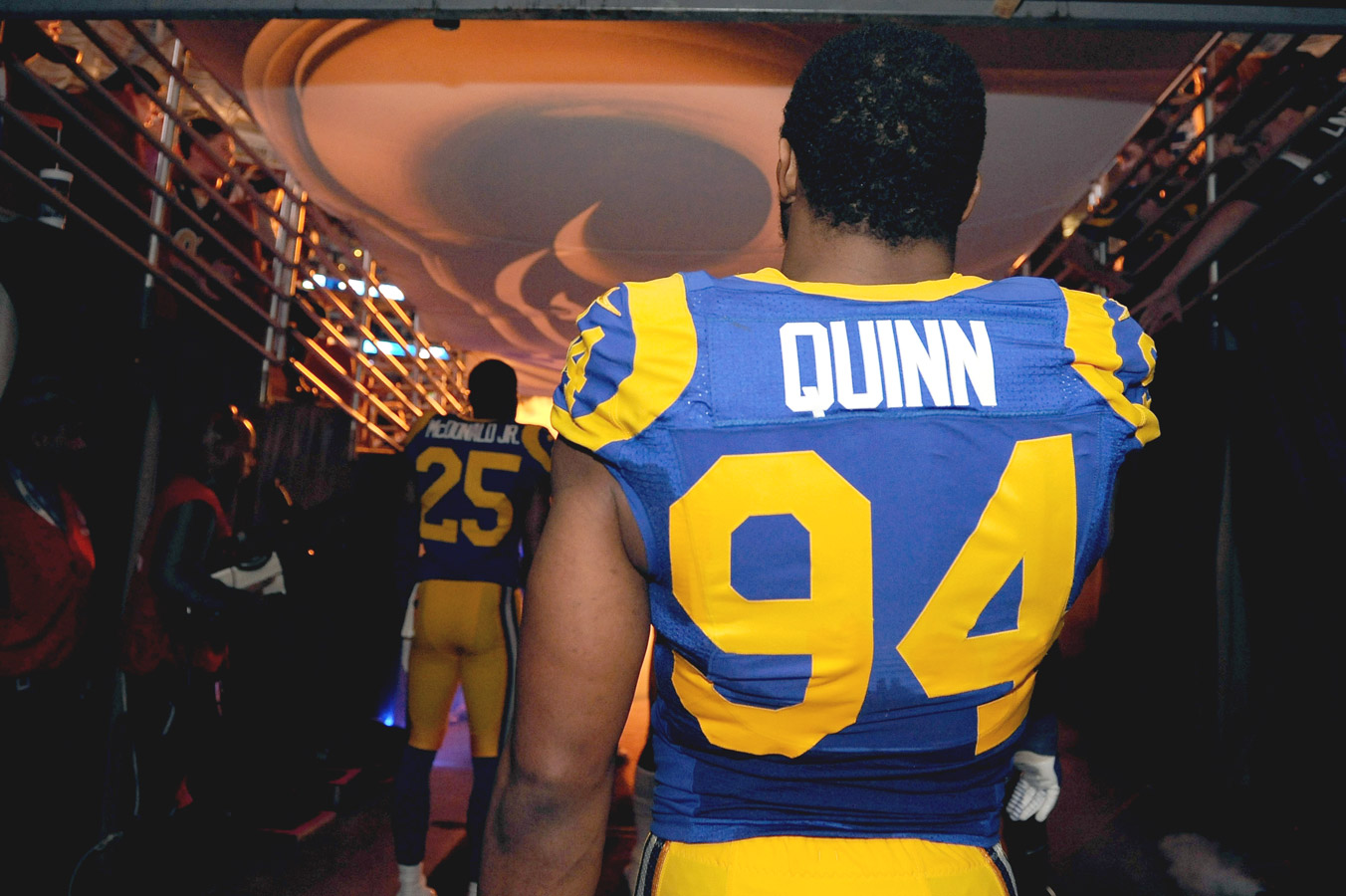 The Rams made their young defensive end Robert Quinn a franchise player when they extended his contract in 2014 all the way through 2019. The team’s single-season sack record holder had a bumpy road last year trying to fight off a back injury.

Quinn had never missed a game until week nine versus the Minnesota Vikings. What we didn’t know at the time was that Quinn would end up being done for the season. The Rams haven’t really had a chance to maximize their defensive line personnel because they have battled injuries. Everyone talks about the extreme depth the Rams have on their defensive line but it’s minimized when they can’t use their backups in a rotational way. Last year that definitely was the case as both Chris Long and Quinn went down with significant injuries.

This year Quinn has been trying to come back better than ever but he faced an uphill battle in the injury recovery process. Now this Saturday when the Rams go to Mile High Stadium to play the Denver Broncos, Quinn will be in the starting lineup on a defensive line he hasn’t been with in an actual game since the middle of the 2015 season. It should be a fun experience for Quinn who probably won’t play a ton but still needs the game reps for the season.

Here is the thing with Quinn, he had a defensive player of the year worthy season in 2013, a down year to his standards but still solid nonetheless in 2014 and his 2015 campaign was plagued by injury. Now here comes a new season in a new home and new players to go with him on that d-line.

If everyone stays healthy this defensive line could be a monster presence in the record books. The Rams signed former first-round picks Quinton Coples (Quinn’s former teammate at UNC) and Dominique Easley. Quinn is coming back to a defensive line that has a new starting defensive end alongside him in William Hayes and an overall improved interior d-line duo of Michael Brockers and one of the best in league in Aaron Donald.

To predict Quinn to replicate his performance in 2013 seems rather foolish but I think that’s what fans alike should be ready for. Quinn is going to be back, he is much too talented to fall off. Due to the pure talent on the line Quinn will have more one-on-one match ups unlike past years in which he was double teamed frequently.

The best part of the Rams signing all the talent and having all the talent on the back end of the roster for the d-line is the fact you can keep players like Quinn fresh. That is what is going to make the Rams d-line extremely dangerous and Quinn for that matter. With the emergence of players like Ethan Westbrooks and Matt Longacre, Quinn will be able to come out for plays, take a breather and know the dropoff in talent won’t be much to ruin impact the play in a negative way.

Had Quinn been held out all of preseason it would have not only been a mistake but he never would have had an idea of where his explosion is compared to the starting offensive lineman and where it needs to be to start the new season. Quinn is going to play in the preseason, get all the rust out and he is going to propel himself back to his 2013 self.