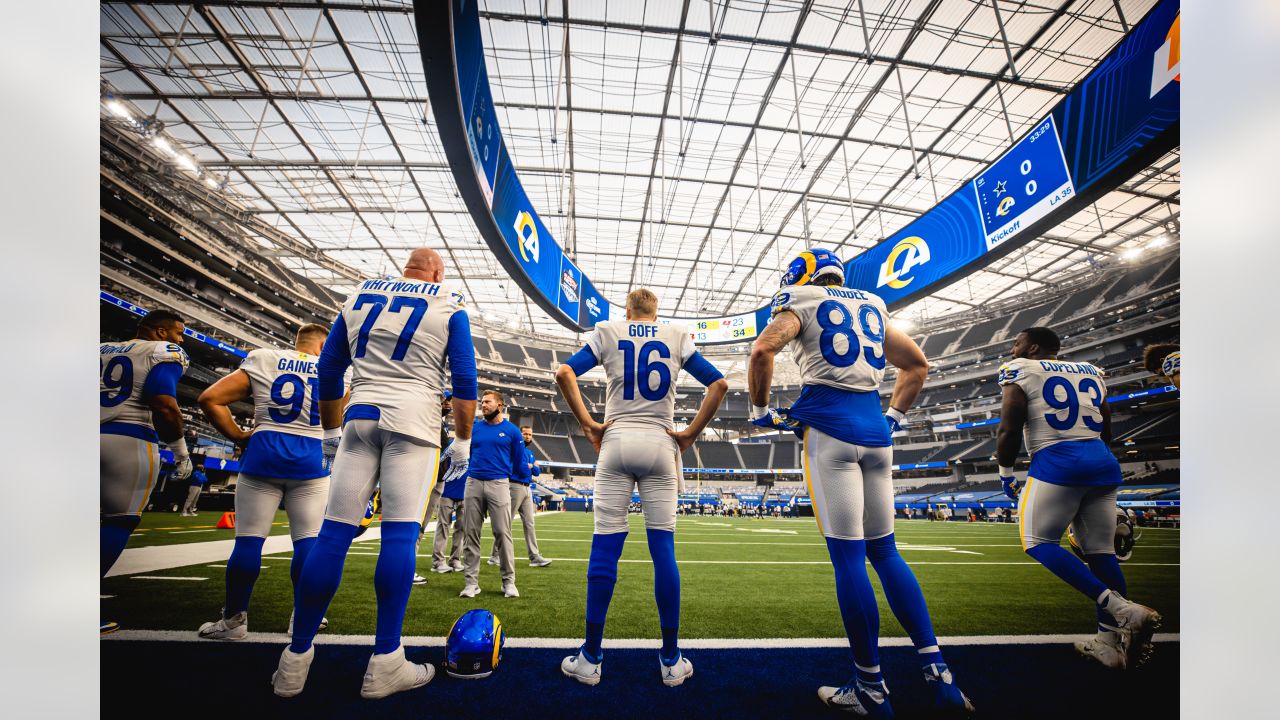 The Rams offense deemed pretty well against the Dallas Cowboys this past Sunday.

Their first series of the 2020 season at their new home ended with a touchdown. They moved down the field with urgency and effect play calling. After the first drive, they looked as if they might score a touchdown on every possession.

The Cowboys stalled on their first possession giving the ball right back to the Rams. With the ball back in the Rams possession, the Rams marched right back down the field. Once in the red zone they were stopped and had to settle for a field goal attempt, which was missed.

The offense slowed after the second possession and where held to 13 points in the first half. The Rams game plan seemed to focus on the run game and quick passing to keep Goff on his feet. The deepest pass attempt thru the air Goff made was 27 yards to Jefferson, which was a dime. The rams had 7 points total in the 2nd half, ending the game with a total of 20 points scored. Overall, the offense ran efficiently, but had a few drives come up short.

Let’s focus in on the different dimensions of the offense starting with the passing game. Goff had a good game overall. He had a few questionable decisions but had a high-quality game that ended with a win. Goff was quick in his reads and made good throws overall. It is easy to criticize from the couch, but he seemed to play well. The game plan that coach Mcvay put together, got the ball out quick and into playmakers hands, to do what they do best. The quick-release Goff showed could be due to the reliability of the Oline, or just part of the game scheme. Either way, it seemed to do pretty well overall.

The receivers group had a good game catching the ball as well. Led by Robert woods, who had 3 or 4 straight catches on the first drive alone. Kupp had a few catches but was used sparingly, most likely due to his ankle injury sustained in training camp. The best catch of the day for the group was hauled in by rookie standout Van Jefferson. He hauled in a beautiful over the shoulder grab in traffic for a 30-yard gain on 3rd down, in the 2nd quarter. Tight end Tyler Higbee also looked fresh with a few catches and a couple of YAC yards in the game. Higbee looks to be a nice weapon for Goff in weeks to come. On the other side tight end Gerald Everett left the game with a back injury but seems to be on track to play this Sunday vs the Eagles.

The running attack was there for the Rams all game. Now, there were not any 50-yard homerun touchdowns, but when they needed 3-4 yards Running back Malcolm Brown was the man. He led the Rams in rushing with 18 attempts for 79 yards and 2 touchdowns. Brown definitely had the hot hand all game. The Rams also fed Cam Akers who had 14 rushing attempts but only had 39 yards. Akers just could not seem to get going against the Cowboys defense. Running back Darrell Henderson was used sparingly with only 3 carries for 6 yards. On one of Henderson’s carries, he seemed to miss a pre-snap change from Goff and went a little too wide on a carry to the right. After that play Henderson did not see the field again.

The offensive line led by big Whit was probably the biggest concern for fans as the season began. The Oline group played relatively well against a pretty good Cowboys’ defense. The group only allowed 1 sack the entire game. They also opened some good holes for the running game throughout the night.

In entirety, the Rams offense was a well-oiled machine Sunday night.  With a trip to Philly coming up this Sunday against an Eagles team looking for their first win of the season, the Rams are looking to build off there week one victory with continued success on offense. The Rams have a lot to work on to meet their goals, but they are attainable.

How will Coach McVay’s’ offensive scheme differ for this week to the prior against the Cowboys? Will coach Mcvay spread the ball out more? Give guys nursing lingering injuries like Kupp and Henderson more touches? I for one would like to see running back Darrell Henderson get 10 plus touches, to see what the kids got. The biggest concern for me is, can the rams keep the running attack going! The running game gets the play-action going which is a big part of the rams’ offense.

All in all, the Rams just need to keep the momentum going, keep the ball moving and score touchdowns. They have a tough road game against the Philadelphia Eagles this week, and the offense needs to play up to par to get the dub.