Los Angeles Rams: How the Defense Can Bounce Back Against Seahawks

The Los Angeles Rams are coming off of a disappointing defensive performance against the Arizona Cardinals on Sunday. The defense allowed 24 first half points which was as many points as it had allowed in a game all season. The Rams won’t have a lot of time to think about Sunday’s performance. It’s on to the Seattle Seahawks on Thursday Night led by Russell Wilson, Tyler Lockett, and DK Metcalf.

After a tough loss to the Cardinals in Week 4, the Los Angeles Rams face another division opponent in Week 5. The Rams travel to Seattle on a short week for the Thursday Night Football Game. Seattle is currently 2-2 and third in the NFC West, just behind the Los Angeles Rams at second.

The Cardinals remain undefeated and now solely at the top of the division with San Francisco in the 4th spot. The Seahawks continue to be led by Russell Wilson and the dynamic duo of DK Metcalf and Tyler Lockett, as well as a strong run game from Chris Carson. As an offense, they rank 10th in points per game, and have moved to a more pass happy offense with a 44-56 run-pass split.

On paper, this offensive line is performing pretty well. As a unit, they are fourth overall in adjusted line yards for run blocking with 4.93 according to Football Outsiders. They are finding rushing success on 86% of power plays ran. Additionally, their running backs are getting stuffed at the line of scrimmage the least amount of time in the NFL. When it comes to providing running lanes for open field yards, they are again best in the league.

However, as we’ve seen in the past, this unit continues to struggle in pass protection. They are ranked 25th in adjusted sack rate with 8.4%, giving up 8 sacks on the year. Additionally, their Pressure Coefficient rating was 28th in the league prior to last week when they gave up 3 sacks in the first half to the 49ers.

DLine is eating! The 3rd sack of the first half.

Gabe Jackson has added a veteran presence to the left side of the line to pair with veteran Duane Brown. Damien Lewis is the only Seahawks draft pick starting up front. This pieced together unit is also beginning the week with starting right tackle Brandon Shell on the injury report with an ankle injury.

While this offensive line is stout in the run game, they are suspect in pass protection. With a new line already, this is a group that could be exploited on Thursday night.

Although Duane Brown is the veteran on the left side of the line and has contributed to a good pass blocking unit, the average yards per carry for Seahawks RBs is at its lowest on runs to the left tackle. However, runs outside the hash to the left have averaged 4.7 ypc and the Seahawks have run outside to the left at the second-highest frequency.

Normally defenses would need to key in on Chris Carson. However, as seen in Week 4 against the 49ers, the Seahawks are willing to use a committee backfield. Alex Collins saw a good amount of carries last week and Carson was on Tuesday’s injury report.

Carson has been successful as he broke off long runs against the Vikings, but he also has yet to get more than 16 carries in a game this season. The Seahawks have variety in the backfield and aren’t afraid to use it.

As mentioned in the introduction, the Seahawks have so far strayed from their perceived run-heavy scheme. They are calling run plays 43% of the time (14th) but are averaging just under 23 rushing attempts per game (25th). Chris Carson has been the clear lead back up until Week 4, rushing for a total of 54 times for 232 yards and 3 TDs. Alex Collins broke out in Week 4 with 10 rushing attempts for 44 yards and 1 TD, with 2 receptions for 34 yards. Adding 15 rushing attempts of his own, Russell Wilson has contributed 58 yards and 1 TD to the run game. This multi-faceted backfield has taken a back seat to the high powered passing attack, but they’re the most talented trio the Los Angeles Rams have faced since Week 2 at the Colts.

The Seahawks running game has been more successful running to the right as they have a higher success rate over average per Sharp Football Stats. And thus they run to that direction more often. However, when in the Redzone, the Seahawks have a strong tendency to run to the middle or left, never to the right, and only on 1st and 2nd downs. Chris Carson has been the primary back on 1st and 2nd downs, but is split evenly with Russell Wilson on 3rd downs with 5 apiece. Carson and Wilson’s yards per carry on 3rd downs is also relatively high at 8.0 and 5.8. However, as a team, the Seahawks are only converting on 3rd downs 1/3 of the time.

The passing game for the Seahawks is currently operating on an efficient but possibly unsustainable rate. According to Team Rankings, despite calling pass plays 56% of the time, the Seahawks are 29th in pass attempts per game with 27.2. They are also currently 25th in completions.

This rate is already proving to be unsustainable as Wilson has regressed statistically each game since Week 1. What the numbers do show is that it doesn’t take much for Wilson to get into the end zone. Wilson’s receivers have been breaking off big plays. Both Lockett and Freddie Swaim have long catches of 69 and 68 yards, respectively.

The receiving group of Lockett, Metcalf, Swaim, and Will Dissly have combined for a total of 12 plays over 20+ yards. The three wide receivers have also combined for eight touchdowns.

While Lockett started the season as the hot hand for the Seahawks in the first two weeks, Metcalf has received more targets as of late. Metcalf has outpaced Lockett the past three weeks, averaging 9 targets per game to Lockett’s 7.

The Seahawks are struggling on third down conversions as they rank 27th overall.  Wilson is also starting to create very noticeable tendencies on third downs, especially on third and longs. If he doesn’t start mixing up his passes to the right, teams will be able to key in on this.

Every successful third down conversion pass attempt has gone to the deep left. In Week 1, Wilson’s touchdown passes were to the middle of the field. Since then, all touchdown passes have been towards the sideline and the majority of passes have been outside the hashmarks. He’s still throwing to the middle, but in Week 2 he only completed two passes inside the hashmarks. 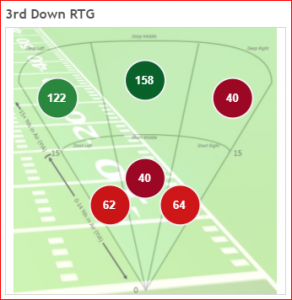 This week needs to be redemption week for the Los Angeles Rams defense, and it starts up front. The defensive line needs to take over this game from the get go. They need to pressure Russell Wilson early and often. The defensive line will need help from the secondary to lock down the wide receiver trio of Metcalf, Lockett, and Swaim in order to create coverage sacks.

Jalen Ramsey has the size and athleticism to hang with Metcalf. This should help buy time for the pass rushers to get to Wilson as he scrambles and looks for someone to throw to. The edge rushers will also need to be solid in contain and not let Wilson get outside and buy time or run for a first down. Lessons should be learned from last week’s matchup against Kyler Murray on how to contain a Konami Code quarterback.

Tommy Mo is a former D2 student-athlete that brings his decades of football experience to Downtown Rams. Tommy lives in Long Beach, CA and covers the Rams as the home town team. He also writes and oversees content creation for The Undroppables. You can find him on Twitter at @2on1FFB.

Los Angeles Rams: Where Does the Defense Need to Improve?

Los Angeles Rams: How the Rams Can Avoid A Second Consecutive Loss