Rams WR2 Woes | Who Can Contribute Outside Of Kupp?

The Rams are in an interesting spot right now, the offense hasn’t been working as it should, primarily because of the offensive line. However, another issue that needs to be addressed is the presence of a second wide receiver in the offense. This problem dates back to last year when it seemed Stafford and Robert Woods couldn’t connect as well. Cooper Kupp should be the Rams’ main target on offense, but he shouldn’t be the only target. Let’s break down why the position has been such trouble for the Rams recently and what they can do to fix it.

Cooper Kupp has been dominant for the Rams with Matthew Stafford at quarterback, partially because of his target share. As of week 5, Kupp is on pace to catch 166 balls, about 20 more than last year. Kupp is Stafford’s safety blanket and it really shows on film and on the stat sheet. The last two weeks the ball has been spread around a bit more, but the first couple of games he was dominating thw team target share.

There has to be a point to where targeting a singular player in an offense starts to hinder it, and I think the Rams are getting pretty close to that. Defenses have been zeroing in on Kupp and Stafford sometimes forces the ball to him. Of Stafford’s 7 interceptions this year, 3 came when targeting Kupp. Compared to last year those numbers are pretty much the same with 5/17. Don’t get me wrong, Kupp is a great player, but he shouldn’t have to be the team’s only source of production on offense. 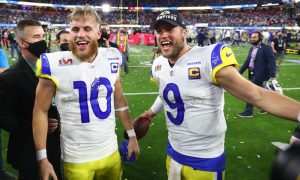 One of the glaring problems with the Rams’ offense this year has been the offensive line. No quarterback does well when there’s bad protection up front and finding open receivers is hard when defenders are in your face. This year’s situation is pretty similar to the 2019 season, the Rams lost two big pieces on the offensive line coming off a Super Bowl. Goff did much worse when he didn’t have a clean pocket, so McVay was forced to improvise, installing more screens and using less 11 personnel.

The offensive line also contributes to the run game, which in turn gets pressure off of Matthew Stafford. Teams are playing two safeties back for the majority of the time because they know the Rams can’t run the football well. Two high safeties means passing the ball is much tougher as you’ve got more defenders in coverage. Stafford is being pressured 25% or 1 in every 4 snaps which gives him less time to make reads. A majority of the offensive problems stem from not having good protection up front.

The Sean McVay offense is a complex one, ask any player and they’ll tell you that. There’s a lot of nuances that take time to learn hence why you rarely see rookies step in immediately. McVay has been doing more with less for a while now, and now the cracks are beginning to show. The front office is tasked with filling in the roster with late round picks, but what happens if they don’t work out?

Depth has been a huge problem for the Rams recently and it showed in the Super Bowl at receiver. Players that would be limited role players on other teams are thrust into the spotlight as starters on the Rams. Ben Skowronek has been starting at wide receiver this year as a 7th rounder, something you don’t see many teams doing. They have to hope that their current stars perform well, as there’s not much help underneath them.

A fan favorite free agent pickup last season, OBJ is in the running to be picked up by a playoff contender around December. In his limited games with the Rams, Beckham was a great intermediate option and was at times the main target in the offense. The Rams are missing his ability to stretch defenses wide, as no other receiver is a threat currently. Last year, the leaders in average depth of target were DeSean Jackson, Van Jefferson, and OBJ, none of whom are on the field for the Rams currently. The main reason the big plays are gone is the players that made those types of plays are gone as well.

An integral part of this offense started the season hurt. Van Jefferson was an underrated contributor last season, and now that he’s taken out of the picture people are beginning to figure that out. Aside from DJax, Jefferson had the highest yards per reception total last season with 11.7. He also had the highest average depth of target showing that he was the guy if the Rams wanted to make a big play. This season no one has come close to his numbers from last year, with no receiver passing a 10 yard ADOT. Once Jefferson returns from injury I’d expect to see him bring a different dimension to the offense.

The Rams pre season standout, many are calling for McCutcheon to get more playing time. As I’ve mentioned before, you don’t see many rookies get substantial playing time in the McVay offense, but it might be time to consider starting McCutcheon. In college, he averaged 17.7 yards per reception with a career long of 68 yards. Many had concerns he wouldn’t be able to produce at the next level, and during the preseason those numbers stayed basically the same. He’s got the ability to win 50/50 balls at the catch point similar to Allen Robinson. The only problem I see with him starting is that if the Rams can’t take advantage of Robinson’s skill set, how can they do the same with McCutcheon?

Tutu is an interesting case in the Rams offense for sure. When I was making this list his name didn’t even come into my mind at first as an offensive contributor. Atwell can barely crack the depth chart, and last week was his first catch ever. Somehow Brandon Powell has earned a more consistent role in the offense than Tutu, which isn’t a good look.

On the bright side, the pass to Tutu last week was one of the very little explosive plays this year, something the Rams have severely lacked. Longer developing routes lead to bigger plays, but his speed can help those routes lead to big completions. It’ll be interesting to see his role in the offense moving forward, but for now he’s looking like a less involved DeSean Jackson.

The Rams signed Robinson this offseason to be their definite second option on offense. What should happen is Robinson should be thriving while the defense is focused on Kupp, but that’s hardly been the case. Robinson has failed to win at the line of scrimmage and separate from defenders. ARob had a down year last season for the Bears and many including myself thought he would bounce back with the Rams. Similar to Robert Woods, Robinson just hasn’t been able to establish any kind of connection with Stafford.

One of his strengths is his ability to win at the catch point, something that hasn’t happened yet so far. Robinson thrives on long developing routes like a go, but the offensive line isn’t giving enough time for that to happen. Here’s Robinson’s route tree versus Philadelphia in the playoffs in 2018 versus his route tree against the Rams in 2021. You can see pretty clearly that when he’s asked to run shorter routes he does worse. Whether it be by play calling or offensive line improvement, the Rams need to switch up Robinson’s route tree to draw on his strengths. 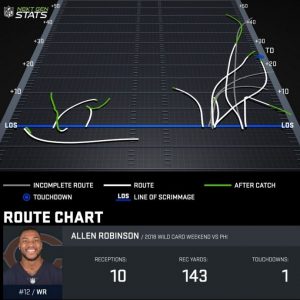