The Los Angeles Rams pulled off a big win last Thursday night in Seattle, winning 26-17 over the Seattle Seahawks. It was a game where Geno Smith stepped in for an injured Russell Wilson. The Rams trailed 7-3 at halftime and rallied together as a team to get the win.

The defense stepped up early and late, stopping a fourth-and-short conversion early in the game and forcing two interceptions. The second one by Nick Scott gave the ball back to the Rams to seal the victory with a 47-yard Matt Gay field goal. The defense came together despite some issues in the secondary and are ready to carry that momentum into Week 6 and an injured Giants offense.

"Nick Scott takes it away, and the Rams will go home with their fourth win of the season!"

The New York Giants are currently 1-4 with their lone win against the Saints in Week 4. The Giants are coming off a Week 5 loss to the Cowboys where Saquon Barkley injured his ankle early in the game as he stepped on a teammates foot. Daniel Jones also suffered a concussion on a hard hit from Jabril Cox on a short yardage goal line run.

Jones went through the concussion protocol and was a full participant in Friday’s practice and will start on Sunday. Barkley is out for at least 1-2 weeks and will miss Sunday’s game against the Rams. Kenny Golladay also continues to be out.

Significant players with the questionable tag who missed practice this week includes: Andrew Thomas, Ben Bredeson, Darius Slatyon, and Kadarius Toney. Despite the Giants record and injury report, the Rams need to continue putting the pressure on opponents to give the offense more opportunities to score points.

The Giants offensive line is in a constant day-to-day mode of who will be healthy enough to get the start. Currently, like last week, the entire projected starting left side of the line is injured and questionable to start. Thomas and Bredeson are both solid blockers when they start. However, they haven’t been healthy and sometimes changes are coming down to the last minute. If Thomas and Bredeson are out again, this is a matchup the Los Angeles Rams defensive line will want to exploit.

Giants keeping opponents on their heels by not even knowing who they want to start each week on the OL https://t.co/PXyByIAqvL

However, if at least Thomas is healthy and Solder gets to play right tackle this offensive line can play pretty well. They were able to put it together against New Orleans and pull off the win. With only Matt Skura subbing in to play left guard, the offensive line was able to open up run lanes for Barkley, and passing windows for Jones. But that was just one game.

Overall, this offensive line is second to last in adjusted line yards and second to last in creating second-level yards for their running backs. They are middle of the road in power run success rate and creating open field yards. However, they have been fairly good at protecting Daniel Jones with an adjusted sack rate of 5.1%  which ranks ninth this season. Additionally, Jones has just been sacked eight times this year.

The Giants are more likely to run the ball between the guards, and have been more successful doing so (on a yards per carry basis) than over the tackles. However, their highest yardage per carry comes from runs to the outside right (5.7 ypc). Explosive runs of 10 yards or more have occurred from the left guard to outside the right tackle box. The one time they ran to the outside left, they lost six yards.

The Giants running game even with Saquon Barkley has not been great this season which bodes well for the Los Angeles Rams. The Giants are currently ranked 24th overall in rushing attempts per game and rushing yards per game. They are not running the ball a lot  and when they do they are not doing it efficiently or effectively.

Aside from Daniel Jones, who is the team’s leading rusher, the Giants have not been effective in the run game. Barkley had 54 attempts for 195 yards and two touchdowns this season. The former top-five pick has been riddled with injuries and been far from his potential.

Now that Barkley is out, the run game turns to Devontae Booker who has rushed 23 times for 64 yards and one touchdown. Booker was effective for the Raiders last year after four years in Denver. He only received a full season’s workload his rookie year in 2016, but he can be effective in replacement for Barkley for a couple weeks.

Besides talent, there won’t be a significant drop-off in usage. Booker can run and catch equally well. Allowing him to be used in all facets of the offense.

Penny and Brightwell will also fill in rotationally out of the backfield. The runner to keep an eye on, however, is Daniel Jones. The Giants use Jones in both scrambling plays and designed runs. The going will be tough on the ground as the offensive line is not helping much.

Still, the Giants will struggle to run the ball against the Los Angeles Rams. They are 31st in adjust line yards and 21st in stuffed rate with their running backs getting stuffed at the line of scrimmage 18.1% of the time.

The Giants are more successful on runs to the left guard side than to any other direction on the field. The most successful runner in the backfield has been Daniel Jones as he has a 53% success rate compared to 44% for Barkley and 30% for Booker.  Without Barkley, expect more outside runs by Jones or inside runs over the left guard by Booker. 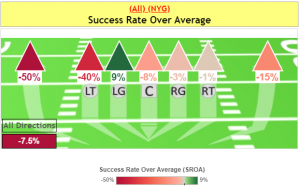 The passing attack has been good when Daniel Jones has played well. It all hinges on him. And he has progressively played better in each game this year.

This season he’s thrown for over 1,200 yards with four touchdowns and one interception. Jones is also completing a career best 64.3% of passes. Jones is also spreading the ball around as he’s hit 13 different receivers so far this season. His favorite target, Kenny Golladay, leads with 29 targets.

Now that Golladay is dealing with a knee injury, Kadarius Toney is right behind him to pick up the alpha role as he has 27 targets himself with 20 receptions for 280 yards. Shepherd, Slayton, and Engram have also contributed but have missed multiple games already.

On paper, there’s a bevvy of talent in the receiving group for Daniel Jones to throw it too. However, none of those 13 receivers have been reliable as far as health, except for backup tight end Kyle Rudolph. Still, the Giants are tied for 12th for pass attempts per game with 36.6.

This is a pass happy offense with pass plays called 61% of the time. Scheme may not be winning them games, but the Giants are productive. They are ranked 8th in passing  yards per game with 284.8, but are only 26th in passing touchdown percentage.

Daniel Jones likes to throw the underneath routes and he completes those passes at a high percentage. When throwing deep Jones favors his right side based on frequency of passes. However, when he does throw to the deep left, it’s most often on first and second downs and he has the highest rating when he throws deep left.

On third down, Jones likes to throw it to the deep center and he has been deadly accurate with a 100% completion percentage. Toney works all over the field, Shepherd primarily underneath, and Slayton’s routes have mostly been go-routes and deep comebacks.

The defense will instinctually want to take this game easier after last week due. However,  that’s exactly what the Los Angeles Rams defense should not do. They should come out strong and make a statement. This group needs to show that they are a championship winning defense from the get go.

They need to limit points, force turnovers, and put pressure on Jones from the first whistle to the last. This matchup is far from a cake walk but the Giants are also fighting with one arm tied behind their back. This should allow the Rams defense to focus on shutting down the pass while not forgetting about the run.

The offensive line for the Giants can be exploited, especially the left side. This is a perfect opportunity for Floyd, Lewis and Donald to tee off on the offensive line. The run game is not a major concern anymore, but the defense needs to be strong in the box, bringing pressure up the middle on short yardage run downs.

Lastly, the secondary needs to step up against a relatively weak wide receiver group and shake off the slow start as a unit. Ramsey will continue to do his thing against Kadarius Toney, while the secondary works to not get beat over the top by Slayton.

The Rams defense can exploit the following tendencies to gain an edge in the game.

Tommy Mo is a former D2 student-athlete that brings his decades of football experience to Downtown Rams. Tommy lives in Long Beach, CA and covers the Rams as the home town team. He also writes and oversees content creation for The Undroppables. You can find him on Twitter at @2on1FFB.