For the second week in a row, the Los Angeles Rams face a tough opponent as they go on the road to face the Philadelphia Eagles, a team that should contest with the Dallas Cowboys in the NFC East for the division.

In week one, the Eagles lost to Washington 27-17 while the Rams defeated the Dallas Cowboys 20-17.  This will be the home opener for the Eagles and the first road trip of the season for the Rams.  The game will be on Sunday, Sep 20 at 1:00 PM ET.

The Eagles have a lot of work to do to rebound, having given up 8 sacks and Carson Wentz was under pressure all day.  They were nearly unstoppable to start the game, jumping to a 17-0 lead and Wentz looked great going 12 of 15 for 174 yards with 2 touchdowns. Injuries, poor quarterback play and questionable (if not aggressive) coaching cost them dearly; after a hot start, Wentz finished 24 of 42 for 270 yards with 2 touchdowns and 2 interceptions.  The running game did not help with only 17 attempts for 57 yards, no touchdowns and only 3 rushing first downs.

The Rams also have some work to do after week 1, but the plan would seem to clean up versus almost starting over at the proverbial drawing board as it appears the Eagles need to do.  The Rams moved easily on offense but only scored touchdowns on 40% of their red zone visits and the kicking game was shaky to start (a wild miss on the first field goal and a line-drive for the second).  The “running back by committee” turned into the Malcom Brown show but Cam Akers had some solid work and Darrell Henderson was limited returning from an injury.

Going into the City of Brotherly Love is always challenging but there are too many injuries on the Philadelphia offensive line and in the receiving corps, whereas the Rams seem to be clicking – advantage goes to the Rams on offense for week 2.

The Eagles allowed 27 straight points to Washington, but some of that was on the offense as every scoring drive started inside their own 50, two of them inside the red zone.  They only allowed 239 total yards but did need some critical stops and did not get them.

The Rams defense made some major adjustments in the second half of the game versus Dallas and held them to only 3 second half points.  Although they gave up 380 total yards, they only surrendered 17 total points and stopped a prolific offense from scoring; a ‘bend don’t break’ stance that secured the win.  Aaron Donald was nearly unstoppable with 7 hurries, 2 quarterback hits and a sack – not to mention the highlights of him throwing grown men around like potato sacks.   The entire defense played well, including a standout performance by rookie Jordan Fuller.

Tale of the tape on Defense is not close – Defense goes to the Rams in a landslide.

Heading into the season it would appear that the Rams would have an edge on special teams as the Eagles are mediocre in every aspect and have not made any strides (at least on paper) to improve but last week the Rams did not necessarily show that they have improved either.  Changes for the Rams in the kicking game (rookie Samuel Sloman) and having Cooper Kupp return punts are still to be played out; week one DVOA keeps the Eagles at very average (18 of 32) but the Rams finished ten points lowers at 28.  An over-reaction would not be warranted after one game, but as the Rams are figuring things out, the edge here goes to the Eagles.

Coaching – Sean McVay versus Doug Pederson, a tantalizing coaching match up.  There are many correlations between the two; both reached the Superbowl in their second year as a head coach (score the W here for Pederson), both had their franchise quarterback drafted in 2016 with Jared Goff going number one overall and Carson Wentz going second (acknowledging that McVay was the beneficiary, not the Rams head coach at the time of draft).  The hardware at this point in their careers would go to Pederson (2-0 vs McVay) and until McVay outcoaches Pederson head to head, the nod goes to Pederson although CBS would disagree: 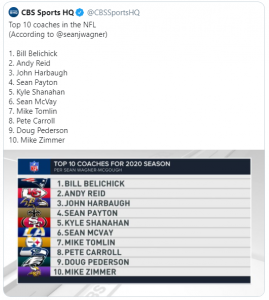 Trend/Mojo – Rams stock is up after a week 1 win against the Eagles division rival Dallas Cowboys and stock down for the Eagles in their surprising week 1 loss against the Washington Redskins.  Edge to the Rams.

Weather is forecasted (and subject to change) to be sunny with a high of 66 degrees, perfect football weather.

Before week one this was looking to be a road game that would have had the Rams on the ropes and although the Eagles will bounce back and likely not perform as badly as week one, there is too much to recover for the Eagles and the Rams are playing well enough to steal one on the road: Rams 31, Eagles 13.