The Los Angeles Rams signed 17 undrafted free agents to go along with their eight draft picks to make for an 25 player rookie class. While these players will be a long shot to make the roster, there is some potential with the 17 signings, especially on special teams. I ranked the 17 undrafted free agents and their likelihood of making the final roster.

Jake Hummel might have the best chance to make the final roster. The Rams have had success in the past with undrafted free agent linebackers. You can look at Cory Littleton and Troy Reeder as prime examples. Hummel could be the next in line. 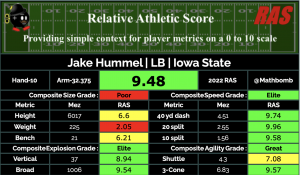 According to The Athletic’s Dane Brugler, “Hummel doesn’t always play up to his testing numbers, but he processes well with NFL worthy athleticism and toughness to be a core special teamer.” Hummel has 866 career special teams reps. On defense, he’s good at diagnosing the play and getting there. It would be a surprise if Hummel didn’t make the final-53.

When it comes to offensive linemen, the Los Angeles Rams are a team that especially values experience and versatility. Snyder has exactly that. He picked up 50 starts at San Jose State at both guard and tackle. From an athletic standpoint he compares favorably to Matt Tobin and Cole Strange. Snyder is a good mover and has strong hands. He’s not the strongest player, but that’s not something that the Rams typically value on the offensive line. 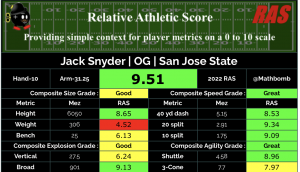 Snyder should fit well in the Rams’ zone-blocking scheme and be a good potential depth piece. Last season, the Rams found a gem on the offensive line in Alaric Jackson. Last season, PFF gave Snyder a 90.9 overall grade that was tied for the fourth-best figure of any Group of 5 player. Snyder should have a very good chance of making the final 53.

It was only a few years ago that the Rams found a diamond in the rough in undrafted free agent tight end Kendall Blanton. Blanton had hung on to the Rams since 2018 and finally got his time to shine last season with the team’s injuries at the position.

From an athletic standpoint, Pettigrew compares favorably to Coby Fleener, Tyler Eifert, and Logan Thomas. The Rams had interest in Pettigrew in the seventh round, but opted to draft other players. Pettigrew said that his agent made him aware early in the seventh round that the Rams were interested. Pettigrew transferred to McNeese from LSU. He didn’t see a lot of action in the passing game, but did contribute as a blocker. Pettigrew will have a chance to compete for a depth tight end position. It would not be surprising to see Pettigrew on the practice squad. He’s all the cousin of former Lions tight end Brandon Pettigrew.

It seems like for the last three years Los Angeles Rams fans have been wanting Sean McVay to add a tight end, full-back flex like a Kyle Juszczyk in San Francisco. Well, he may have found one in Roger Carter from Georgia State. 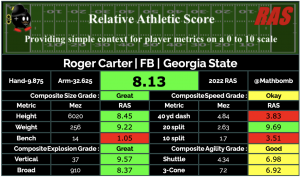 Carter was a reliable pass catcher at Georgia State with good hands. Additionally, he understood his role as a blocker and wasn’t afraid to get dirty. He isn’t fast, but he shows good explosiveness and has good size. He had 20 receptions for 323 yards last season. Carter will be someone to keep an eye on for the intrigue alone.

Over the last year or so, the Rams have been transitioning to wide receivers who can win with their size and win that 50-50 ball. This might be the biggest difference since trading Jared Goff for Matthew Stafford. Jacob Harris brings this ability and we saw it from Odell Beckham Jr. Additionally, this is something that Allen Robinson excels in.

Lance McCutcheon is a name that should be at the top of every NFL Draft board pic.twitter.com/ISn5vEvAVu

McCutcheon’s strength is winning the 50-50 ball, having the ability to outmuscle and box out defenders. McCutcheon lined up everywhere in the Montana State offense and is a good route runner. Both things will have stood out to Sean McVay.  McCuthcheon isn’t fast which is his prime negative trait. However, this is someone who can make plays.  Earning a roster spot won’t be easy, but McCutcheon could compete with Ben Skowronek.

It wasn’t that long ago that the Los Angeles Rams developed Sebastian Joseph-day from a late round draft pick to starting defensive lineman and nose tackle. The Rams could potentially see a similar path for Dion Novel. He started every game at nose tackle the last two season for North Texas and is the only player in North Texas history to reach 37 tackles for loss. 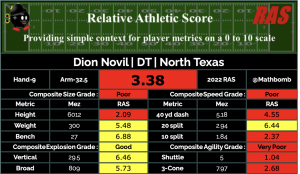 According to The Athletic’s Dane Brugler, “Novil won’t create many pass rush opportunities, but he is active with above-average gap power when he plays on time, projecting as a potential backup.”

Elijah Garcia has some potential here as someone who could stick on the roster. Garcia started three years at Rice. He’s an athletic defensive line prospect that can be a force in the middle of the defensive line. He’s a high-motor player and exactly what you look for in an undrafted free agent. 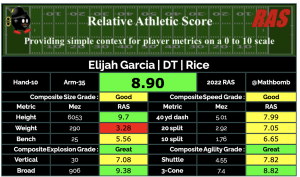 Tony Pauline says about Garcia, “Garcia is a hard-working lineman who flashes athleticism in his game and plays with great intensity. He comes with growth potential that would enhance his game.” The Rams could use some depth on the defensive line. It would not be surprising to see him stick on the roster or at least the practice squad. He’ll be battling with Novil for a spot.

Whitley is an edge rusher, but it would be surprising for him to make the final roster. He does have good awareness and has the ability to get to the quarterback. With that said, he lacks athleticism and physicality which makes him a liability in the run game. Still, he could be a contributor on special teams as he continues to develop.

Brayden Thomas will have an uphill battle when it comes to making the final roster. He has good hands and has played multiple positions along the defensive line. However, it’s tough to see where he fits on the Los Angeles Rams defense. He lacks a pass-rushing plan and the ability to consistently shed blocks. 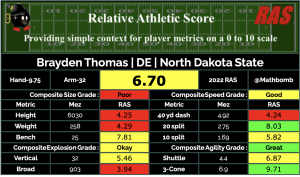 The Rams do need some help ad edge rusher, but Thomas is more of a tweener who doesn’t really excel at one thing. It wouldn’t be surprising to see him as an early cut candidate.

Like most Rams cornerbacks, Duron Lowe is an undersized player, but has good speed. He transferred to Liberty from UTEP and started all 13 games last season where he was a two-time All-Conference USA honorable mention selection. 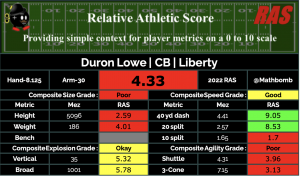 There could be some upside here as the Rams have yet to re-sign Dont’e Deayon. Lowe is a similar player who could fill that void as a depth developmental cornerback.

Carter started his career strong being named second-team AAC in 2018 and Honorable-Mention AAC in 2019. In 2017 he was named a freshman All-American by ESPN and USA Today and was the American Athletic Conference Rookie of the Year. Last season he started the opening 10 games at three different positions – both safety spots and cornerback. Additionally, he was second on the Frogs in tackles.

McVea was a fifth year safety at Baylor and is a player with elite speed and good explosiveness. However, the Rams drafted two safeties. It’s going to be an uphill battle for McVea to make the roster despite having the same last name as the Los Angeles Rams head coach. 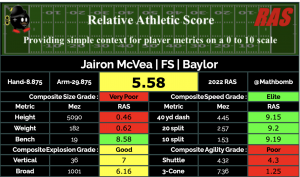 Thomas was overshadowed a big by Florida State teammate Jermaine Johnson. The Florida State edge rusher wasn’t invited to the combine. A South Carolina transfer, Thomas started 44 games over his college career. He finished with 15 sacks – 6.5 of which came last season at FSU. He also had a 30.5 career tackles for loss – 12 of which came in his final year. 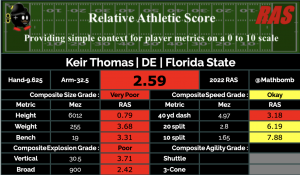 In 2021 he was named third-team All-ACC. He’ll be a long shot at best to make the final Rams roster.

There isn’t a lot out there on Dan Isom. For the same reasons as McVea, he’ll have an uphill battle making the roster with the Los Angeles Rams drafting two other safeties on day three. It wouldn’t be surprising to see Isom as an early cut candidate in camp.

There really a lot of information on Dancy-Williams. He played in 35 games with 19 starts at cornerback over his career with two interceptions and 18 breakups. In 2020 he was named third-team All Big-10. The Rams drafted Decobie Durant and traded for Troy Hill. Making the roster will be difficult.

The Los Angeles Rams signed Riley Dixon in the offseason and already have Matt Gay at kicker. Dicker does both, but will likely be a camp leg. Dixon will be the favorite to win the punter competition. However, Dicker only had three of his 57 punts go for a touchback. He had a long of 78 and with average of 43.6 yards.