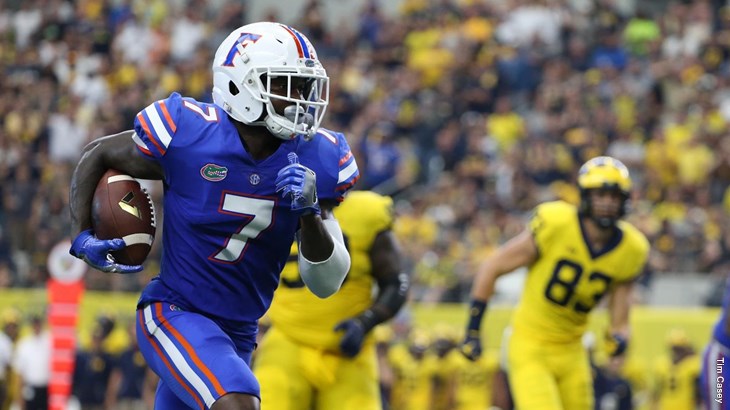 Duke Dawson is another defensive back from a Florida program which has produced players like Joe Haden, Janoris Jenkins, and Keanu Neal.  As a disclaimer, I am a Gators fan.  But allegiance aside, Duke Dawson projects to be a strong slot cornerback with potential to be a physical outside guy if he can prove to keep up.  Due to his lack of standout speed, some teams have even considered moving him to safety.

The reason Dawson projects mostly as a slot corner is because of his limited speed and size.  Dawson is only 5’10”, which may pose an issue being an outside guy.  However, many players overcome this and size is not the best determination of projection in the NFL.  Joe Haden, Kyle Fuller and Casey Hayward are also under 6’0 and are some of the better defenders in the league.  While Dawson is quick and has good ball vision he isn’t considered to have top speed.  Some of this could be due to a need in improvement in technique.  Dawson has tight hips and will occasionally be beat by fast WRs with run very clean routes.  In football a moment of seperation is all you need.  If Dawson could show to NFL coaches he could keep up with outside receivers he can be moved to the outside full time.

Dawson is a very physical defender who beats up receivers on the line of scrimmage.  He also reminds me of another former Gator, Janoris Jenkins.  Dawson is a playmaker with an eye for the ball.  However, he also makes some risky plays, like Jenkins.  Sometimes they work out, but sometimes it leads to an easy play for an opposing offense.

In terms of coverage Dawson is a complete player.  Due to his physical nature he is better in man-to-man coverage but also would play well in a zone system.  His riskiness comes out more in zone coverage when he thinks he has an opportunity to make a play on the ball.  When players are able to catch the ball, Dawson often makes a strong tackle.  His physicality and strength also leads to fumble opportunity as he is known to make hard hits. 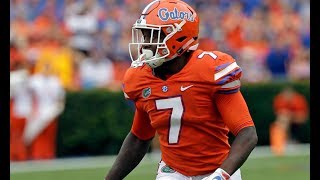 DTR has no part in the creation of this highlight tape – it is simply here for your entertainment.  Highlight videos are not a part of the scouting process.

Where he Fits with the Rams:

Target Round: 3rd Round

Draft Need:  The Rams are likely to draft one or more cornerbacks, especially with news that there is a likelihood that Trumaine Johnson may leave the Rams.  If the Rams do not draft a corner in the first round they are almost certain to draft one in the third.  Keeping in mind that the Rams do not have a second round pick, it is curcial they draft a starter in the first round.  Even if they go corner in the first, they may select a second one, and it could even be in the third round.  Last year rookie cornerbacks Marshon Lattimore, and Tre’Davious White greatly impacted their teams and Rams front office could try to mimic that.

Under Wade Phillips and this coaching staff Dawson could be a key player in the rotation.  His physical nature and playmaking ability fits the style of the team.  With Joyner at safety behind him and strong play all around, Dawson could afford to take some risks which may pay off big.  Overall, the Rams should consider drafting Dawson if they have the opportunity.  He is a hard worker and could be a value piece of Wade’s puzzle.

I have also included an interview with Duke Dawson from the Senior Bowl this year:

DTR did not conduct this interview, however our very own Jake Ellenbogen did cover the Senior Bowl live and in person.