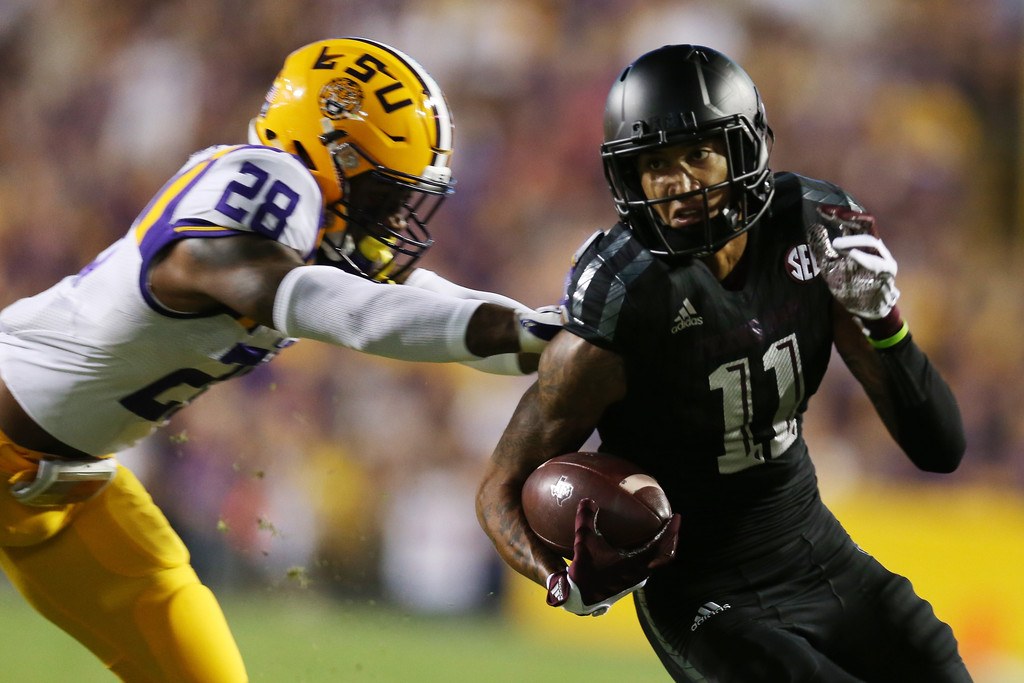 Welcome Josh Reynolds, the speedy wide receiver from Texas A&M. Coming in at 6-3 and 190 pounds with 4.4 speed and a 37 inch vertical I bring you everybody’s dream WR from a measurable stand point. Coming from a big school Reynolds went out and produced against the best of the best on week to week basis with a below average QB carousel throwing him the ball, to the tune of 61 catches for 1,039 yards and 12  TD’s in 13 games. He also spent some time contributing on special teams.

To break down what I like about Reynolds I have a handful of gifs for us to look at and dissect.

In this first clip we are going to watch and confirm what Reynolds is known for, being a spectacular deep threat.

Not much to dissect here but I can tell you how it ends, with 6 points and a defender in the dust.

Our next clip we have a play where Reynolds shows off his ability to fight back to a very poorly thrown ball. This corner route turns into a badly placed pass that Reynolds has to cut his route short for, turn back, fight through a defender committing PI and high point the ball to secure the TD catch. He does so flawlessly and comes away with highlight reel material. These types of contested catches separate the men from the boys in the NFL.

For the next clip we get to witness Reynolds most underrated aspect of his game, at least underrated when it comes to people in the mainstream or who have not dived into some of his tape. Reynolds has phenomenal feet for a WR standing 6-3 let alone a receiver as small as say, a guy like John Ross. Reynolds displays great foot work  off the line allowing him to stay clean and not be pressed and thrown off his routes. For example in the clip below Reynolds is working against a consensus top CB in this years draft, Tre White. Reynolds starts out like he is going to run a 9 route breaks down about 2 yards in front of Tre white and cuts inside on a clean release to run a slant. Once the ball is in his hands he simply hits the after burners to run away from Tre and Jamal Adams (the top safety in this draft who just ran a 4.33 today at his pro day).

This next play we get to see another very important part of Reynolds game, his ability to adjust to poorly thrown passes. This is something Reynolds had to do time and time again. Thanks to his poor QB play, I watched a lot of tape where Reynolds would run a great route create separation to only have to stop turn back and adjust to a horribly thrown pass.

This play is no different, Reynolds is running what looks to be a deep fade route, he stacked himself up to the boundary side of the corner to try and beat him to the back pylon and box him out for a TD catch. Only it seems his Hall of fame QB has other plans. Thanks for an errant throw Reynolds has to adjust from the right side of the field to the inside of the corner in a split second and make a catch over his shoulder while tracking the ball. Again, this is stuff you don’t see too often and shows how effortlessly Reynolds is able to track a ball with his back to the QB.

Lastly I have a nice clip of Reynolds beating double coverage in style.

Simply put Reynolds is running a deep route most likely a fly, with a corner in trail coverage and a safety over top. The QB decides to take a shot here (admittedly makes a nice throw even against double coverage) and Reynolds plucks the ball out of the air with one hand while staying in bounds. Just a beauty.

I will admit there isn’t much I don’t like about Reynolds game. Blocking could use some work sure, and Texas A&M isn’t a school known for developing wide outs in the route running department but from what I saw he has the feet to run any route in the book. Just needs a little seasoning and I think you got a potential number 1 receiver.

I can see Reynolds going in the 2nd round, 3rd at the latest.