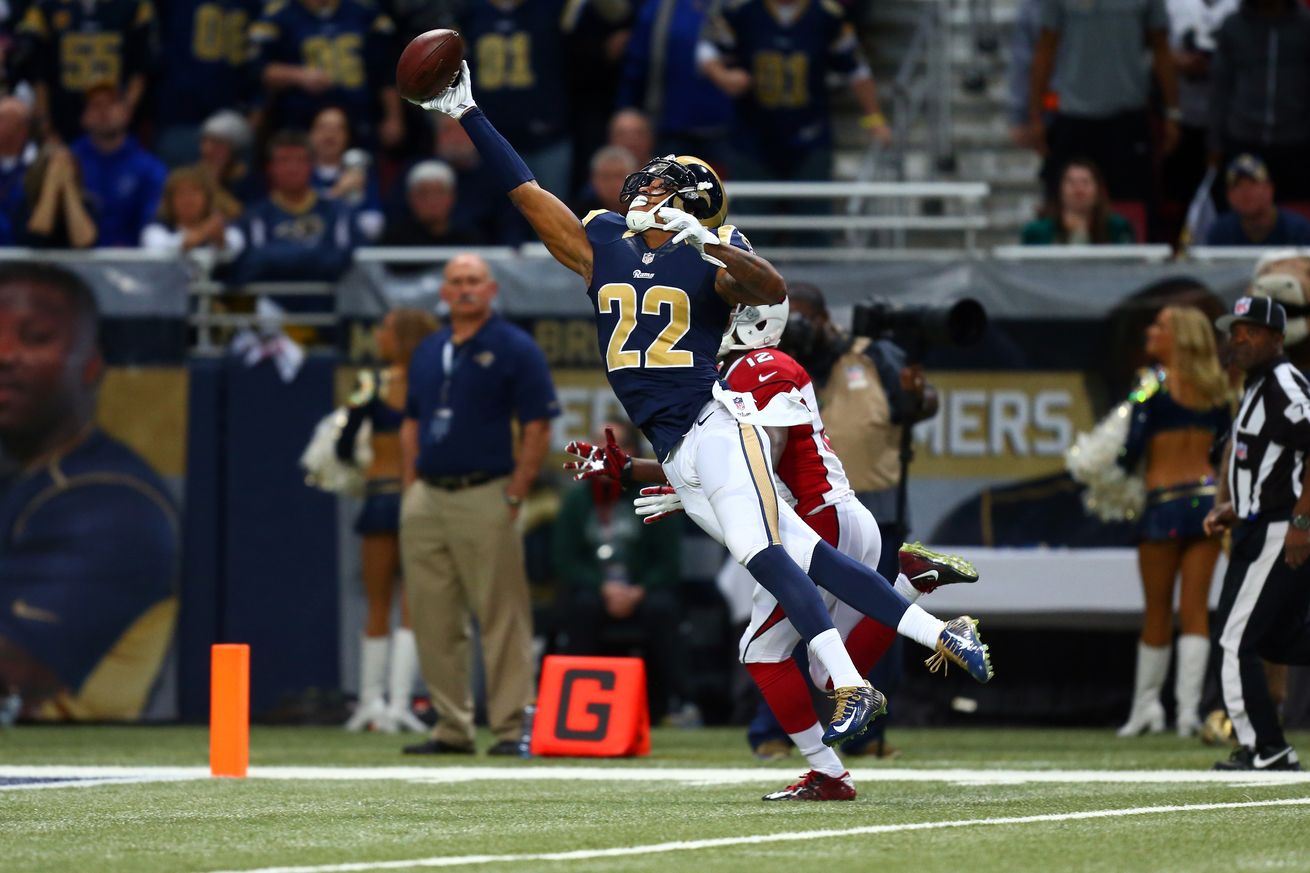 The Los Angeles Rams as expected, for the second consecutive season has placed the franchise tag on veteran cornerback Trumaine Johnson. The tag which comes at a price of $16.7 million will deplete almost half of the teams $38.6 million the team have free to deal with free agents and newly drafted players signing.

As the news was released, a great deal of division was caused by many Rams fans in regards to the team tagging Johnson. Many fans felt that Johnson played below the expectations as a number one corner last season. Injuries has taken a toll on Johnson’s body, but in my opinion, he has suffered them because of his aggressive style on making tackles on running backs who have made it to the second level of the defense. When healthy, Johnson had shutdown top elite receivers such as Calvin Johnson, Demaryius Thomas, and Larry Fitzgerald. He was targeted over 60% of the time last season, but again he played not a full 100%. Not to make a excuse, but his numbers will show when healthy he is the lockdown corner that the Rams expected him to become.

The assumptions of the Rams making this decision could be based on a few key issues. The NFL has announced that the salary cap more than likely be increased between $11 million-$14 million per teams.

Secondly, if the Rams were to let Tremaine Johnson sign with any other team, it will leave Wade Phillips without any true starting corner. In 2016 season, the Rams were unable to come to terms with Janoris Jenkins who boasted the Rams to sign a lucrative deal with the New York Giants. The Rams will be left with a few undrafted free agents Troy Hill, Michael Jordan, and EJ Gaines whole simply couldn’t get the job done. In my opinion, Hill and Jordan had played better with time, but, Gaines never seem to have played at the level he did his rookie 2014 campaign. Gaines has been tremendously injured and a disappointment for the last couple seasons and may not be in the Rams plans moving forward.

It is expected that Rams placed the tag on Johnson in efforts to protect him with the team and continue to try and negotiate in “good faith” a long-term contract. If the two parties can’t come to an agreement, the power lies with in Johnson’s hands fate. He can refuse to sign the offer and sit out the 2017 campaign or force a sign and trade. We seen similar situations to this effect last season with the Carolina Panthers removing the franchise tag from Josh Howard and allowing him to sign with the Washington Redskins.

The Rams to look outside the organization for free-agent defensive back, the top few such as AJ Bouye and Stephon Gilmore each are valued at $14 million-$16 million. It makes better sense in my opinion, to keep your team top corner and draft your future corner in April. Wade Phillips is in favor of big corners that can play on a island by themselves, and Johnson has played that style in college and NFL.

Now that the tag has been used on Johnson, expect for the front office to start freeing up salary space by releasing players or asking them to restructure their existing contracts. Players of concern will be tight-ends Corey Harkey and Lance Kendricks. The release of these two players can save the Rams $5.25 million dollars toward the salary cap.

Rams can also request to certain players or players can volunteer to restructure their deals such as Mark Barron, Tavon Austin, and Michael Brockers volunteering. Todd Gurley, Eugene Sims, Williams Hayes, Aaron Donald, and Greg Robinson all can be asked if all players were to agree to restructures the team can gain an additional $13.1 million toward the salary cap. Don’t take it for granted, but, we will be looking at this same situation next season with Aaron Donald who will be playing in the final year of his rookie deal.

Nonetheless, whether it is accepted as good or bad news regarding Tru Johnson, the Rams front office has to get busy with preparing for the draft and free agency.