The Los Angeles Rams didn’t address the offensive line in the NFL Draft. However, they potentially got a steal in Western Kentucky’s Jordan Meredith. Meredith was a three-year starter at right guard and that’s likely where he’ll play for the Rams. While the Rams could use a center, Meredith started 37 games at right guard for the Hilltoppers. 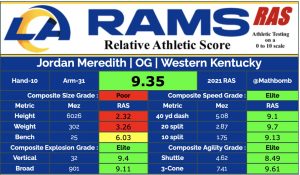 As mentioned, Meredith was a three-year starter at right guard. He only allowed one sack in 2020 and his 81.5 overall blocking PFF grade ranked eighth in college football. According to Pro Football Focus, last season he ranked 13th in pass blocking with an 83.9 grade and his 83.9 run-blocking grade also ranked seventh. In 2019 he led all guards in the nation in pass blocking.

Meredith did go undrafted for a reason. He’ll have to develop and improve his technique, but his athleticism screams potential. 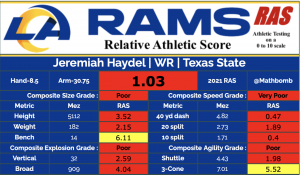 Last season he ranked third in the nation with 687 kick return yards, averaging 25.2 yards per return which ranked 25th. He also ranked seventh in the nation in punt return average with 13.0 yards per game. He was one of only two players to return a kickoff and punt for a touchdown and received an 86.3 overall return grade from Pro Football Focus.

His 1.03 RAS does not bode well in terms of making the roster, but if he can make an impact in the return game as he did throughout his college career, he’ll have a very good chance. The wide receiver room is very deep and Haydel is far from the most talented wide receiver on the roster.

Texas State has clawed back and is tied with UTSA pic.twitter.com/1jRPex4Aci

Alaric Jackson ranked No. 28 in The Athletic’s Dane Brugler’s undrafted free agent rankings as his No. 221 overall prospect. Last season he was named third-team All-America and first-team All-Big Ten. 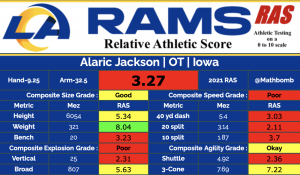 Jackson has a past history with a knee injury and is solid in the run game. He’s not as fluid in pass protection and needs to improve his footwork. His testing numbers aren’t great and with the depth at tackle on the Rams roster, Jackson has an uphill battle and may have to move to guard. As a developmental prospect, there is some potential here. Jackson is worth taking a shot on as an undrafted free agent.

Alaric Jackson is a beast pic.twitter.com/Htl4GbQ4U1

The Los Angeles drafted three wide receivers and had a deep wide receiver room to begin with. With Cooper Kupp, Robert Woods, DeSean Jackson, Van Jefferson, TuTu Atwell, Trishton Jackson, and Ben Skowronek, Akers will be competing for a 6th wide receiver spot or place on the practice squad. 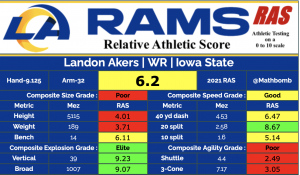 Akers will look to bring special teams value as he was a key contributor on special teams for the Cyclones. Last season, he blocked the first punt in 11 years for Iowa State. In 2019, he tallied 11 tackles on special teams and as a redshirt freshman, he averaged 20.9 yards on kick returns.

The Cyclones receiver likely won’t contribute on offense, but as a body on special teams he makes a lot of sense. The Rams special teams units was one of the worst in the NFL last season. If Akers can show enough on offense to justify a roster spot, he could be a key special teams contributor immediately.

We 👀 you Landen Akers.

Grant is a tough, hard-hitting safety who ranked second on the Warriors defense with 49 tackles. However, if he makes the Rams final roster, it will be because of the value he brings on special teams a part of the coverage unit. At Merrimack, he recorded two career blocked kicks. 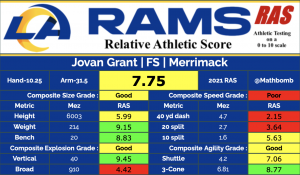 The Rams clearly had special teams in mind with their undrafted free agents. Like Akers, Grant’s value will come on the special teams unit where the Rams struggled last season. He’ll obviously need to show enough as a safety to justify a roster spot, but his immediate impact will be on special teams.

#SafetySaturday Jovan Grant on the takeaway. Sometimes you gotta take what you want #Landlord #RentsDue pic.twitter.com/f2OgA83eoo

Troy Warner is the brother of San Francisco 49ers linebacker Fred Warner. As Rams fans learned with linebacker Ketner Kupp, family genes don’t always translate between siblings. Warner lacks the upside and athleticism that makes his brother Fred special. He only recorded 29 tackles last season and two pass breakups, but he’ll be compete for a special teams role on the roster.

Troy Warner's Top 5 Plays of 2020 (a thread)
–@TroWarner comes up with a big interception in the first quarter vs Louisiana Tech.
–#gocougs #byu #byufootball pic.twitter.com/F8oMLuX2Wo

Paris Ford is a hard-hitting safety who compiled 45 tackles and three interceptions last season as he was named second-team All-ACC. Ford has a lot of positive qualities that have the makings of a good NFL safety. He has range, ball skills, and he’s overtly physical. 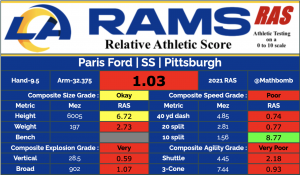 However, Ford lacks anticipation and consistency in coverage for a starting NFL safety. He also tested very poorly in his pro day workout. While testing isn’t the only thing that matters, a 1.03 RAS does not bode well for future success. The Rams will hope that Ford’s positive qualities come through in training camp and he can add some safety depth.

Max Roberts will be a long shot to make the roster, but could provide depth off the edge as a pass rusher. The Rams found Morgan Fox as an undrafted free agent and Roberts could be that same sort of gem for the Rams. Both players had similar size and athleticism. Roberts totaled 4.5 sacks at Boston College last season and 22 total tackles. 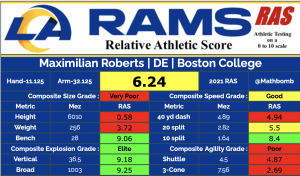 George Silvanic seems to be just a camp body at defensive tackle. Silvanic played in just one game prior to last season. In 2020, he played in six games, totaling 2.5 sacks and 34 tackles. It will be an uphill climb for Silvanic to make the practice squad, let alone the final roster. 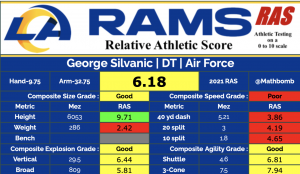 2021 Rams Shadow Draft: How My Draft Haul Compares to the Rams