In 2010 Junior Galette was an undrafted free agent who became an essential component to the New Orleans Saints defense. Between 2010 and 2014, Galette accumulated more than 30 sacks, earning a four-year contract extension. However, he was cut only a few months later. After playing a season with Washington, it was rumored that Galette and the Los Angeles Rams were about to come to a deal in 2017.

Galette’s Deal With Rams Falls Through

Rams head coach Sean McVay later stated that, “It just didn’t work out for reasons that we will keep inside.” The story is much deeper than that however. Galette had been alleging employment discrimination among NFL teams.

Of course I do I also Remember coming back and playing well enough for the Redksins to offer me a 2 year deal but Blackballed me because I wanted to go sign with Sean Mcvay in the Rams. https://t.co/K1LHeUNYO5 pic.twitter.com/9WYsOtv3CT

When Galette’s contract with the Rams mysteriously fell apart, many thought Galette would never be heard of again. But that wasn’t the case. In 2020 Galette wrote an open letter to the NFL and Commissioner Roger Goodell. This letter addressed racism and policies that blackball players for speaking out.

Galette’s letter also acknowledges and thanks the NFL for “acknowledging systemic racism and the inequitable treatment of Black people and people of color in America.” Now Galette is on a mission to bring his concerns to light and his lawsuit against the National Football League is very much alive.

Lmao I was willing to play for vet min for Rams and Sean Mcvay but got Blackballed for speaking up on pay discrimination I’ll repeat it 100 times idgaf there’s a reason fake ass Fans/bots/coons attacking me for speaking facts https://t.co/VIyaccC8ca

Rams at the Center

Interestingly enough it seems that the Rams will be at the heart of this litigation.  Galette revealed that he was willing to play for the veteran minimum, but somehow the deal with the Rams still “just didn’t work out.” Coach Joe Berry, then Rams’ defensive assistant, even asked Galette what jersey number he wanted.

As this is litigation process there is no doubt that many across the NFL will be asked to contribute to the discovery efforts. That means that people like Coach McVay, General Manager Les Snead, and others will likely be deposed, will have to turn over texts, answer questions, and participate in other portions of this litigation. 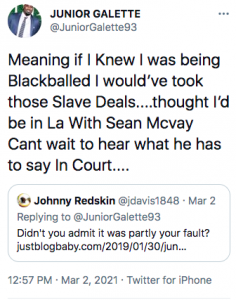 What the lawsuit means

This brings up two important long term issues to consider. The first is the actual lawsuit. Employment discrimination is a serious issue. While it is unknown in whether Galette’s claims have any merit, it is certainly worth following and learning about.

The second issue is the selfish issue of how this affects the Rams. The Rams are very much going to be involved in this lawsuit. While it seems that the Rams were not the primary offenders of Galette’s alleged discrimination, they may have involved in the continued “blackballing” of a player who spoke out against the league.

If coaches, players, and front office administers are being dragged in and out of court that could be a distraction with on the field consequences. There is also the possibility that, if the Rams were involved in wrongdoing, that the organization could be punished.

Well…..you see why they wouldn’t want my Lawsuit to go public #StayWoke https://t.co/xcWZU5ICJJ

DTR Staff: Who Should The Los Angeles Rams Target in Free Agency