The week one match up between the Los Angeles Rams and The Dallas Cowboys will feature a lot of potential star studded performances, which could include air raids by either quarterback, a running game rampage by Ezekiel Elliot or the “Rams by committee“,or a receiver (or two) that could go for multiple scores and 150+ yards – and that is just on the offensive side of the ball!  On defense, the Cowboys have a new coordinator (Mike Nolan) bringing the promise of new looks and schemes; the Rams also have a new coordinator on defense (Brandon Staley) and defensive standouts Aaron Donald and the new contract of Jalen Ramsey.

These high powered offensive and defensive units will be the eye candy that draw fans to the game and what the causal fan will notice as big plays are made, but the unsung hero of the game will likely be on special teams and in this game there is no better nor versatile player than Johnny Hekker.

Field position will be huge in this game and Hekker will be looking to pin the Cowboys behind their own 20 as often as possible.  As the current world record holder for the longest punt in a Superbowl (65 yards), he is more than capable of doing so a few times.  That is, if he punts.

Dallas special teams will always have to be on their toes for a ‘trick play’ as Hekker has been known to throw a pass or two and the Rams are not afraid to use this skill to keep the drive alive.  He has a career passing record of 13 for 22 (~60%) for 184 yards, 1 TD and 1 INT with an amazing statistic of 12 first downs of those 13 completions.

To boot (see what I did there?!?), he is the placeholder for the field goal team and will be critical to making the new rookie kicker, Samuel Sloman, comfortable and confident enough as a game-winning field goal is not out of the question.

“John Angeles” or (my favorite) “Los Hekeles” will not only be important in the match up, he will likely be one of the most important aspects to winning the game and his cool demeanor and experience on special teams will be a game changer. 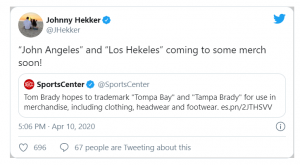