The Los Angeles Rams are set to release their new logo on Monday at noon pacific time. It’s an exciting time for Rams fans as it’s something they’ve been waiting for since 2016 and will officially begin the new era of Rams football in Los Angeles.

With that said, I thought it would be a good idea to take a walk down memory lane and remember some of the logos of Rams past.

It’s simple, but it’s what has built the Rams brand to what it is today. The first logo is a stylized, blue and white ram head and only lasts five seasons. You get the classic ramshorn and Rams head that will be used in the many years to come.

This logo was introduced the year after the Rams won the 1945 NFL Championship and was the first logo of the Los Angeles Rams after the team relocated from Cleveland.

The Rams update their logo by giving the ram’s head more fierce facial features and the infamous gold horns. The gold horns would make their way to the leather helmets, making them the first team to sport a logo on their helmet.

The team would go on to win their second NFL championship, defeating the Browns in the title game. 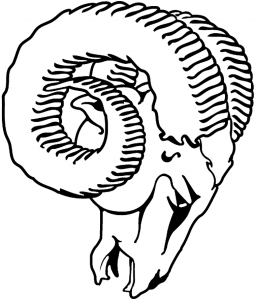 The Rams get a minor redesign in 1970. The Ram head has flipped facing the opposite direction and the horns are no longer yellow as the team moved to blue and white uniforms in the ’60s. The logo was also introduced in the team’s 25th season in Los Angeles. 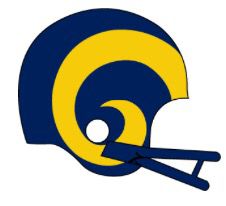 The Rams got a major logo change in 1983. After almost 40 years with the infamous rams head, the team switches to their first helmet logo. It is a right-facing silhouette of the Ram’s blue helmet with yellow horns wrapped around the side as the team switched back to blue and yellow uniforms in 1973.

Using the helmet as the logo makes the Rams the fifth team in the NFL to do this.

The logo in 1989 is the same idea as the previous version, but slightly modernized. The Rams modernize the helmet logo for their 1989 season. They change the logo to look like the helmets worn on the field with an updated shape and a more elaborate face mask. 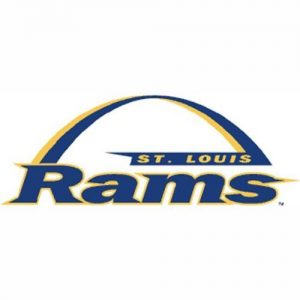 The Rams moved to St. Louis in 1995 and that was made obvious in the new logo. You can see the text “St. Louis” with the arch integrated into the logo as well. This logo is completely different than anything the team had seen before in its history not using the rams head or the helmet as the logo. 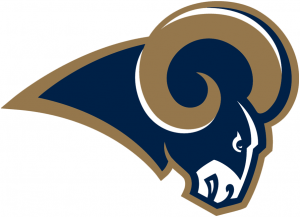 The team went back to its roots in 2000 after building the St. Louis brand. The Rams bring back the famous rams head but modernize to a more dark gold as well as a navy blue. The Ram head itself is more of a cartoon as well. This was a modern take on the Rams deep history.

Re-branding again to the Los Angeles Rams, the team gets rid of the “St. Louis gold”. The Rams head remains in the same form but rids of the gold that was used in St. Louis.

This is uncertain. We know Rams fans will be expecting perfection. After all, the team has been in brand purgatory since the move from St. Louis. That’s why Monday is such a big moment. There have been some potential leaks, but nothing is confirmed.

My best guess is that the 2020 logo is either similar to the 1995 St. Louis logo with LA being the centerpoint or we will get a modern take on one of the classic Rams logos. Either way, thankfully, there is not a lot of time left to wait until we find out.