Los Angeles Rams: Five Browns to Watch vs. the Rams on Sunday Night 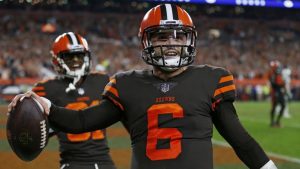 This offseason has brought a lot of hype surrounding the once dismal franchise in Cleveland. Most of it, however, is well deserved due to the talent that has been accumulated in the last couple of years. The Rams face off against what is without a doubt the most talented roster, top to bottom, thus far this season and on one of the biggest stages. Sunday Night Football usually ends up being the week’s premier match up and week 3 of the 2019 NFL season is no different. The following are five players to keep an eye on during the game.

Yes, I am starting a players to watch list with the quarterback. (Duh!) Week 3 began with Ram’s head coach, Sean McVay, singing the praises of the quarterback’s skill set and what all he could indeed bring to the Sunday night contest. Not only has Mayfield started the 2019 season a bit sluggish compared to how he ended his last, but some aspects to his performance from Week 1 were a bit concerning that could/should help the Rams defense, and how to scheme against the second year star. Surrounded by a vast amount of talent, Mayfield’s start could quickly turn from sluggish to scorching in the blink of an eye. Another tidbit to keep an eye on as the game progresses is how Mayfield responds to pressure that will at some point, begin to hit home from the Rams defensive line. If you recall back to the week 1 interception filled quandary, Cameron Wake and company kept the  pressure on throughout. All in all, I look for Baker to be fully ready to get Cleveland off to a hot start.

There are too many adjectives to describe the former number one overall pick, so one word will have to do for now. Freak. Not many players seemed to have progressed as quickly as Garrett has since they came into the league and that is showing in droves, as he has started this year much faster than almost every fellow defensemen that lines up next to him. Through two games Garrett has ten total tackles, and a ridiculous (yet still somewhat under the radar) five sacks! If the young Ram’s offensive line has shown us anything throughout the beginning of the season, it’s that they are subject to allowing pressure on the quarterback. With a stud like Garrett lined up on the outside, the time for the “gelling” process with this young group of linemen needs to really start this week because if they can withstand this defensive front, that should be a great measuring stick for what is to follow the rest of the season. Another situation to watch as the game starts is to where Garrett lines up. Last week, Ram’s tackle Rob Havenstein seemed to have a bit of trouble with Saints defensive end Cameron Jordan and depending on game situation and scheme, I can see Garrett lining up all of the front to try and give the Rams fits.

As it was referred to earlier, the Brown’s offseason resulted in a ton of talent acquisitions. Beckham Jr is the biggest splash of them all and is who can, as it was shown in Week 2 on Monday Night Football, turn the game on it’s head in just one play. Against the Jets, Beckham Jr boasted a staggering six receptions for 161 yards, with over half of those yards coming on just one play that the Browns will (of course) be looking to hit on often this Sunday against the Rams. The Ram’s secondary has played very solid so far this year and hasn’t really been tested. As the Saints had to play backup Teddy Bridgewater for the majority of the game in week 2, wide receiver Michael Thomas seemed to be an obstacle for this secondary but was held in check for the most part. Beckham Jr, however will be the first true test that will require the entire unit to be on their toes to make sure his stat line doesn’t reach the heights it has so far in both of the other games to start the year.

Schobert? Joe Schobert? Why should I be keeping an eye on him as a Rams fan? The answer is simple. This guy just makes plays. With a defense that has the amount of talent that is does, Schobert is somewhat the straw that stirs the drink. Through two games in the 2019 season, Schobert has 21 total tackles and a forced fumble thrown in there as well. These stats are important because it shows just what he brings to the table that could give the Rams offense fits. We seen last week the Rams run game get somewhat shut down as they tried to force the issue up the middle. As the game went on, more toss sweeps and screens were used to really combat the front they were given. Schobert, the former Wisconsin Badger is the type of linebacker that will show up all over the field no matter what type of play is thrown at them. A game situation that I could see being favorable for the Rams is maybe getting Schobert one on one out in space in the screen game and really making him prove his worth.

Richardson was another recent free agent acquisition for Cleveland that is looking to make a splash. Sunday Night Football I’m sure would be the perfect time to do just that. The only reason he is in the “Browns to Watch” is due to what the Rams offensive line has shown to this point in the season. Through both weeks, interior defensive linemen have seemed to be getting a lot of pressure through the center of the pocket and have often been getting Jared Goff off his spot quite a bit. The veteran, Richardson possesses a skill set that could show up big against a young interior offensive line. As the game continued to progress in both weeks one and two, center Brian Allen, guard Austin Blythe, as well as back up guard Jamil Demby, showed great ability to get good combo blocks and work up to the second level so look for those combo blocks to be a big part of the Ram’s inside running game.

The Cleveland Browns have a roster that is not only full of talented players but PLENTY of personalities to boot. Hopefully these five players give a brief look into some of those characters and  some of the challenges that will be presented as you watch on Sunday night!

Los Angeles Rams: Cooper Kupp is Back and He Might Be Primed for a JuJu Smith-Schuster-Esque Rise

Los Angeles Rams: Five Rams to Watch For on Sunday Night vs. the Browns