The new year is fast approaching and while the Los Angeles Rams head into the new campaign looking like one of the best teams, there is always the worry of a roster turnover. Next year the NFL Draft will be loaded with talent and the Rams are going to have to make some tough decisions. Here are five 2020 draft prospects Rams fans need to know as we head into the new season. 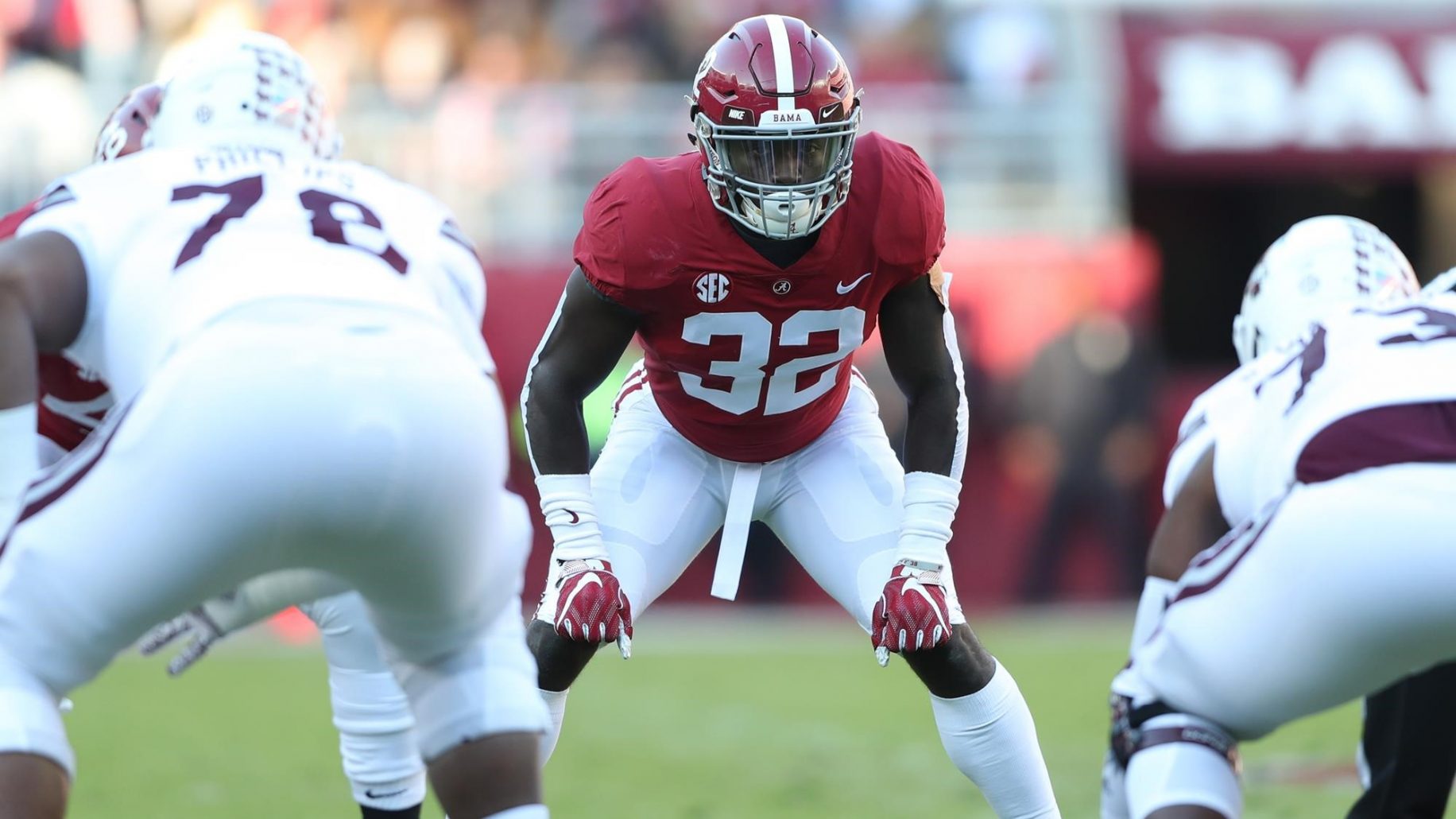 The Rams have an absolute stud in linebacker Cory Littleton, but I’m confused with the Rams linebacker position next to him. For some reason, the Rams refused to grab one of the “new age” ultra-athletic sideline-to-sideline linebackers available in this past draft and previous drafts. I like Micah Kiser and newly-drafted linebacker Dakota Allen, but neither is the athlete I’m looking for as the permanent starter next to Littleton.
Dylan Moses, an athletic freak of nature, was once considered the LeBron James equivalent of a prospect in football. He was extremely versatile and could play a bevy of positions. Once he committed to Alabama, he stuck at linebacker whether it was inside or outside and has absolutely been up to the challenge.
When you watch film of any Alabama prospect, depending on the year, No. 32 or No. 18 would routinely jump off the tape. An elite athlete that ran in the 4.4’s for his forty time, Moses is also an extremely hard-nosed football player that fits the new age linebacker mold. His instincts, his power, his speed, and his awareness make him likely the best linebacker in the draft in my humble opinion at the moment. How would the Rams get him? I do believe the Rams may have to trade up for Moses but it would definitely be worth it. I might even give up half of this draft class for Moses if I could, because he’s that talented.

I’d be excited if I were in #IDP leagues!#devy #RollTide pic.twitter.com/TdSYCsZwyj 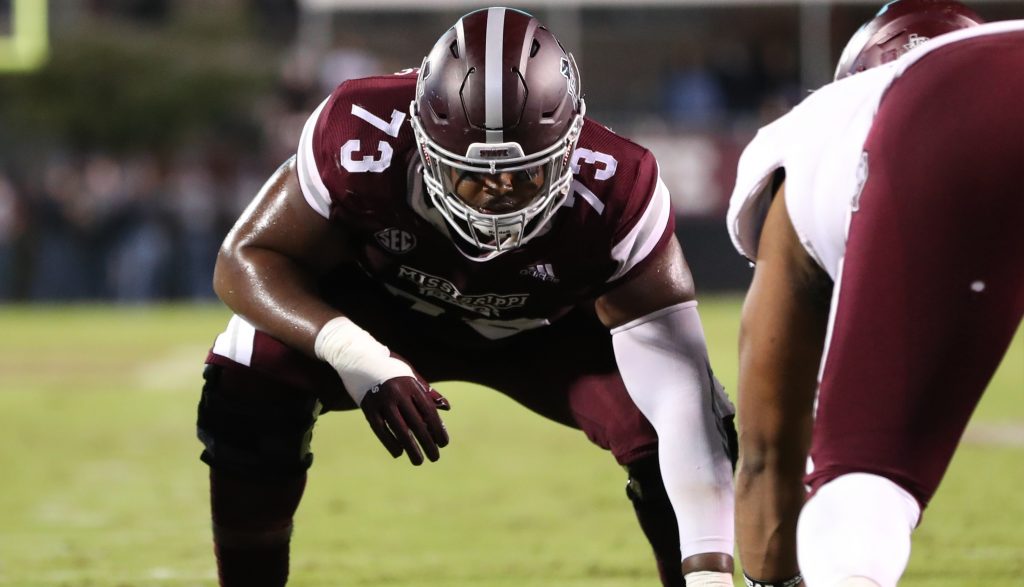 Alas, a player that legitimately made me depressed when I found out that he indeed was not coming out in the 2019 NFL Draft. Darryl Williams is a player to get behind now. He’s good enough to have gone in the top 3 rounds this year and now he gets to go back to school and likely replace NFL center Elgton Jenkins. Speaking of which, the Rams don’t have a proven center which is why this pick makes the most sense.

The Rams have players like Joseph Noteboom, Bobby Evans, David Edwards, Rob Havenstein, Jamil Demby, Austin Blythe, and Brian Allen, but no one jumps out as an obvious stud at the center position. Allen is expected to get the nod and Demby has been taking snaps at center as well, but if Allen doesn’t work out, Williams makes too much sense in next year’s draft. 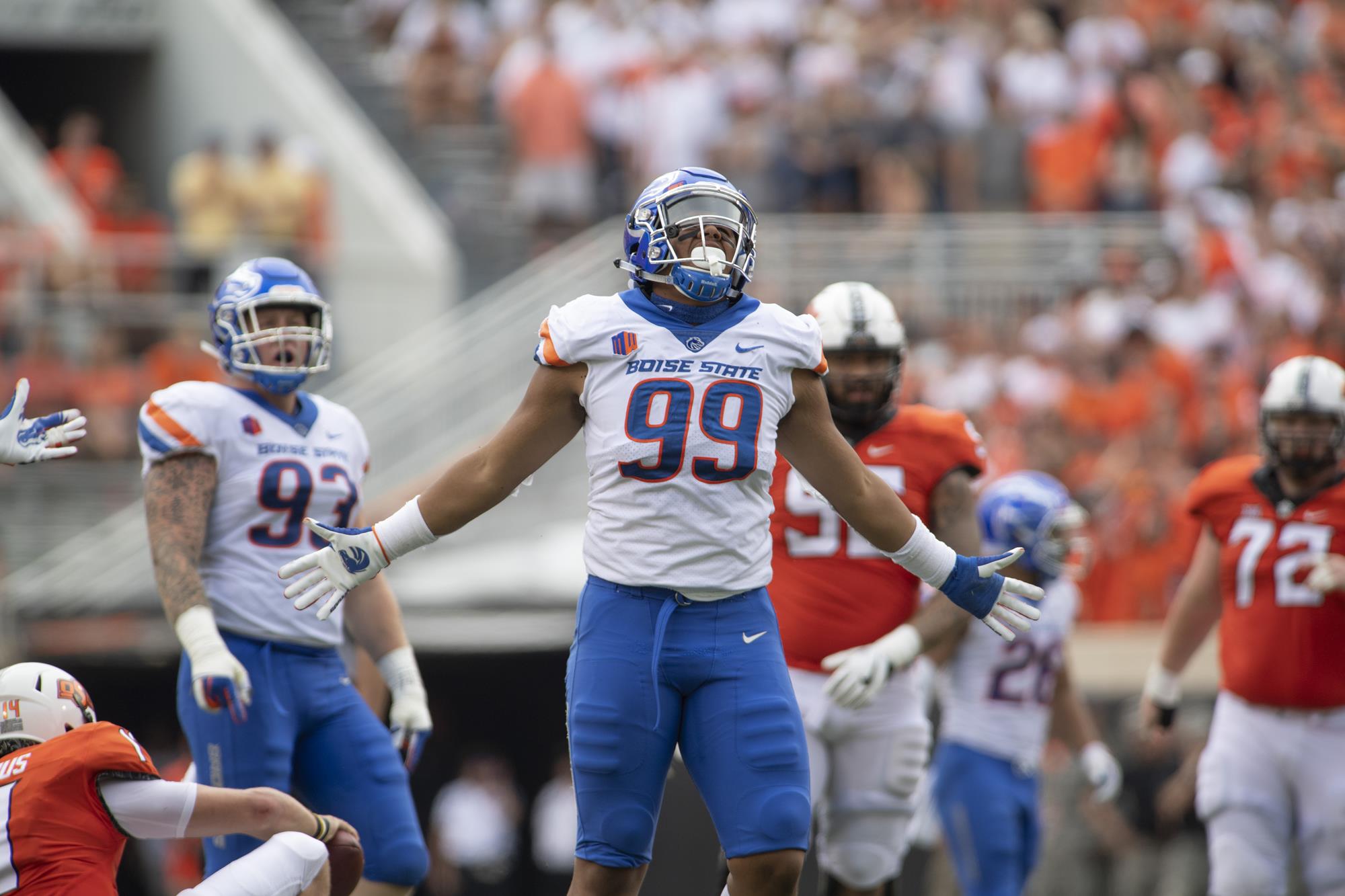 Curtis Weaver is a fun underclassman that may not come out this year, but he certainly will have to consider it. Weaver has a unique blend of size and speed. He can win with speed off the edge as well as power and he is great on stunts. Weaver is a fourth-round pick at the moment due to who is expected to go higher, but after the season ends, Weaver could easily push himself into the second round range.
The Rams could definitely make this pick based on a few things: First, the status of Dante Fowler Jr. whether he comes back or not after the year, second is whether or not the young draft picks don’t end up showing anything to build on, and of course, if Clay Matthews doesn’t end up working out. After the draft this year, anyone can really fall and Weaver might be one of those guys that slip through the cracks and becomes the best player available. If Weaver falls, he’s going to end up making an NFL team very happy.

Curtis Weaver is a very solid player. Great example of getting skinny here to break through the line even though he’s held. pic.twitter.com/lRVzBkLOgZ 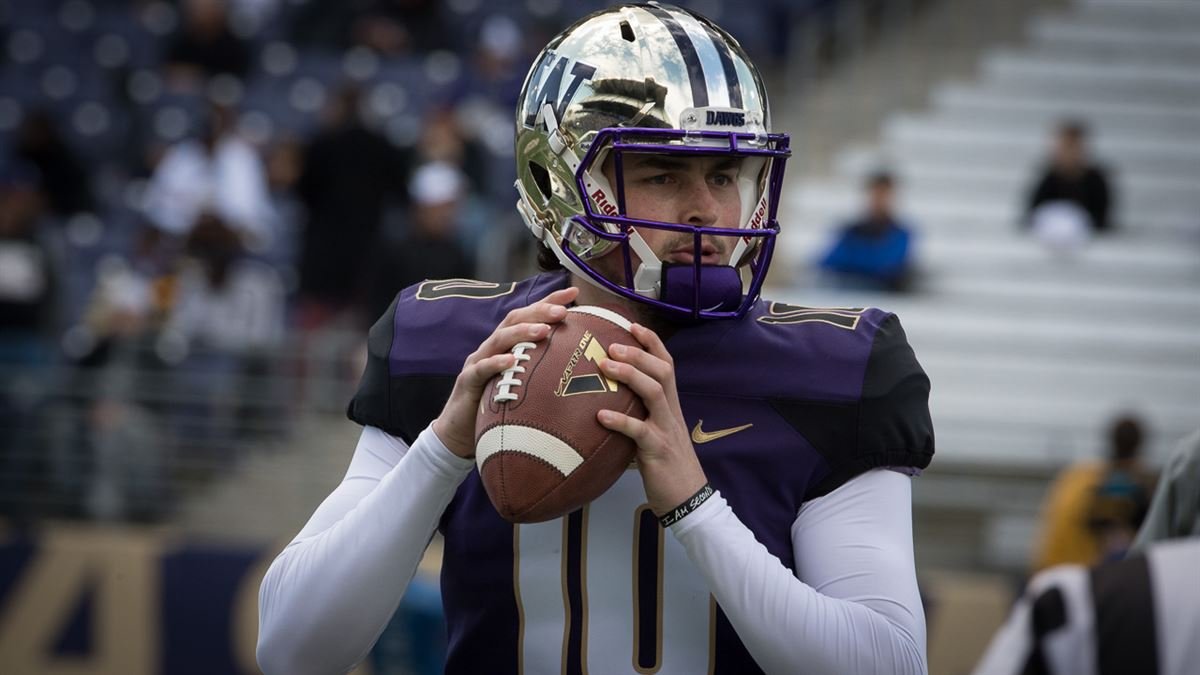 Jacob Eason is a former 5-star recruit that was one of the most exciting prospects coming out of high school. Here’s the issue, Jake Fromm happened and then Justin Fields (now with Ohio State) also committed there. Eason saw the writing on the wall and transferred to Washington where he would have to sit a year behind Jake Browning due to seniority. This year is Eason’s opportunity.
Scouts still like him, he’s got great size at 6-foot-6 and 225 pounds, and he’s a good pocket passer prospect across the board. We will see how his 2019 campaign goes, but Eason would be a huge pick for the Rams.
Jared Goff has not been extended yet and will be entering the final year of his contract on the 5th-year option. Therefore, Eason would make sense. Similarly what Patriots did acquiring both Jimmy Garoppolo and Jacoby Brissett via the draft. The Rams could definitely groom Eason behind Goff and eventually trade him. John Wolford flashed in the AAF, but he also signed just a one-year deal. Brandon Allen has one year left on his deal as well as Blake Bortles.
Eason, right now, would make sense in the third round. However, by the time the 2020 NFL Draft arrives, Eason could very well be a potential top first round quarterback in what is a weaker class outside of Justin Herbert and potentially Tua Tagovailoa, D’Eriq King and Jordan Love. 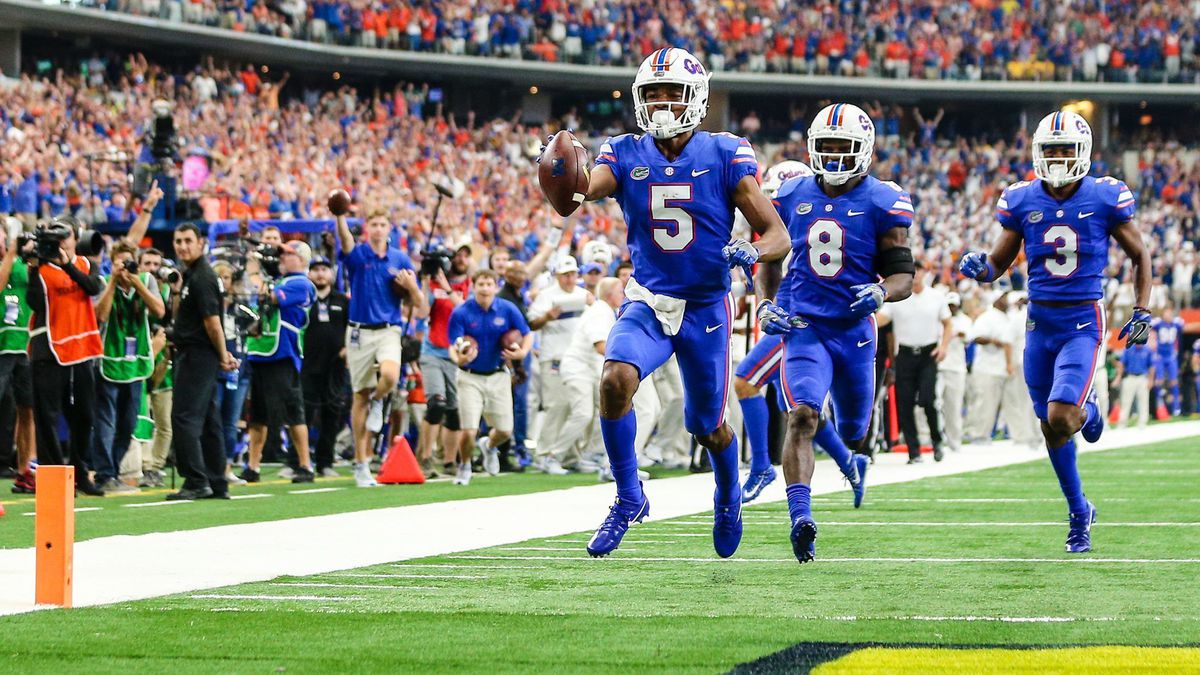 CJ Henderson is going to be a name to keep an eye on for Rams fans. Yes, the Rams did just draft, David Long, and they signed Nickell Robey-Coleman long-term. They even extended Troy Hill on a two-year deal. However, Marcus Peters and Aqib Talib are both potential free agents. When NFL Network Insider Steve Wyche joined the Downtown Rams podcast, he said the Rams love Peters and would try everything to extend him.
However, there is always potential for Peters to be difficult in negotiations or ask for more that what the Rams are willing to spend. The Rams are going to have to start paying their talent and that is exactly why the draft becomes that much more important. Henderson is likely going to end up as a first-round cornerback and therefore he’s cheap talent due to being on a rookie contract.
He’s in the top two on my early list of corners that could be in the 2020 draft. Henderson’s size is more than ideal for the position, his athleticism is going to translate very well to the next level, and of course, you cannot forget about his playmaking ability as shown above.

CJ Henderson should change his name to Maple Syrup.

Why? Because the man is STICKY. pic.twitter.com/VxV03RmZdv

The stickiness in man coverage, the ability to move naturally with comfortability makes it apparent Henderson is going to end up as a top corner and the Rams will certainly have to consider drafting him if Talib and Peters aren’t back with the team.
0 0 votes
Article Rating