EA Sports’ Madden NFL franchise has been huge for the video game and football fan community. It’s become such a big deal that some fans will just look at the overall ratings or attributes that the video game assigns to a specific player in an effort to better understand the tier that player is on. In this two-piece series, I will look to assign my own overall ratings for each player on the Rams. 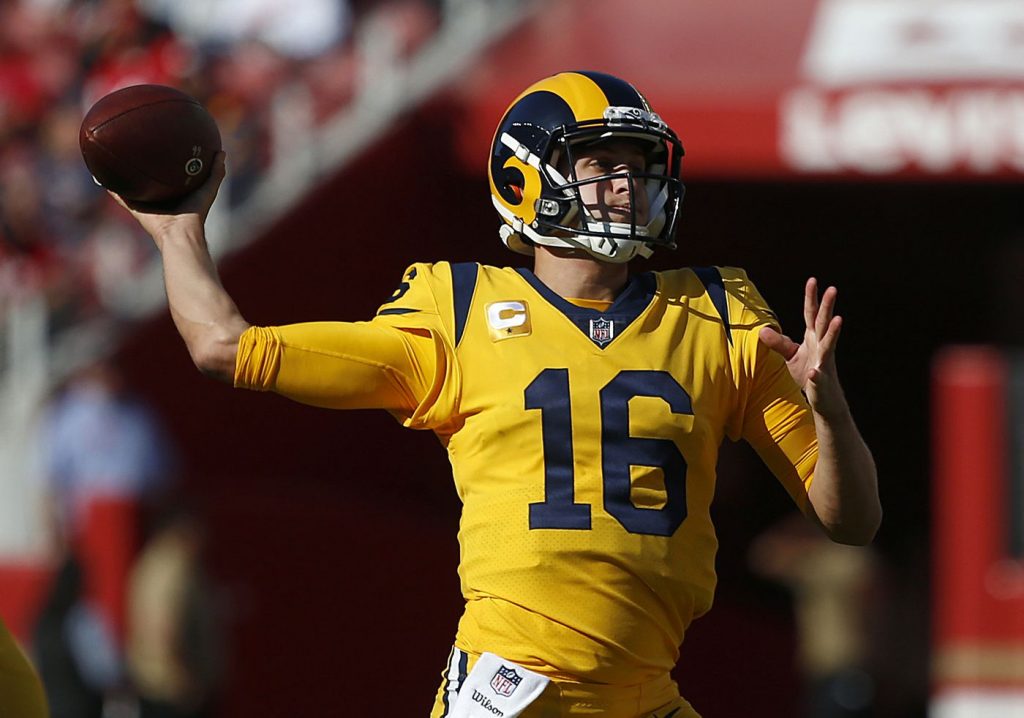 Goff at this point is like Marc Bulger at his best. Bulger received the 88/89 type of rating when he was right on the cusp of something in St. Louis, but of course Goff is only 24-years old and has already played in a Super Bowl. The reason for giving Goff this overall rating is because it represents where I feel he is on the tier chart right now. He’s my seventh-overall quarterback in the NFL and while he’s almost there, he’s not quite elite yet. However, an 88 overall rating speaks to how he’s more than just a guy that is getting things done in the right system. Goff is a difference maker and can surely win a Super Bowl this upcoming season. When you look at his accuracy across all areas of the field, his arm strength, and his awareness, Goff gets the 88 overall with a ceiling to move up to as high as 94 this year alone.

It is worth noting that Madden rated Goff at an 83 and as the 14th best quarterback in the league which is a clear indication of the fact that Goff is quite simply underrated at this point in time. 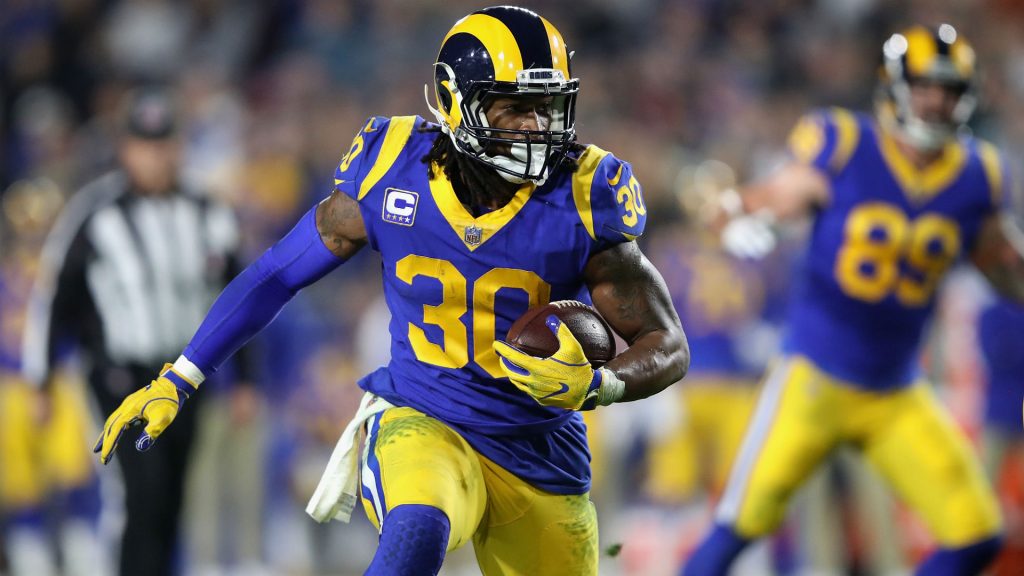 A reminder that overall ratings are not dictated on an injury. Todd Gurley is the best running back in the NFL right now and was well on his way to breaking the total touchdown record for a running back this past season even while he was already hurt. Gurley will likely not end up logging 30 touches in a game ever again, but scoring 56 total touchdowns in four years deserves recognition. Gurley has been the driving force for the Rams offense. I wouldn’t put him at 99 overall because I believe there are only one or two players that deserve such a rating, but Gurley checks in just below with a 98 overall.
Backup: Malcolm Brown – 80 OVR (Madden: 73 OVR)
Backup: Darrell Henderson – 79 OVR (Madden: N/A)
Backup: John Kelly – 71 OVR (Madden: 70 OVR)
Backup: Matt Colburn II – 70 OVR (Madden: N/A)
Backup: Justin Davis – 69 OVR (Madden: 70 OVR)
Wide receivers:
Starter: Robert Woods – 89 OVR (Madden: 87 OVR) 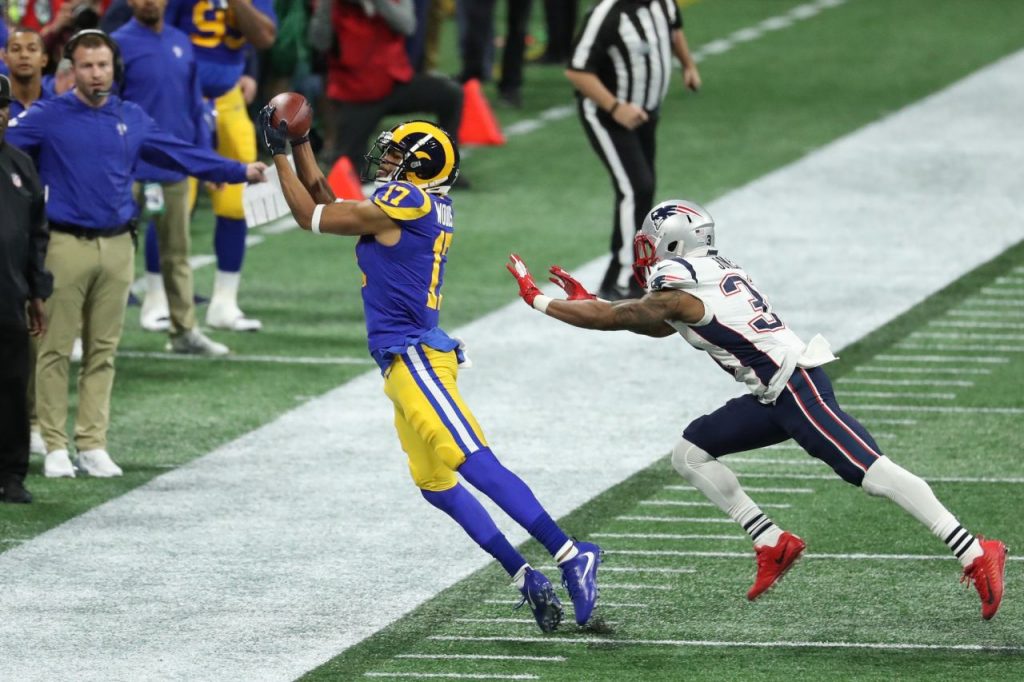 Robert Woods is a model of consistency and reliability. He’s the jack of all trades and master of none. He’s not the fastest, the most explosive, the strongest nor the quickest  – but he excels in all areas of the position. It’s why in just a short time he’s been with a true quarterback, offensive system and a legit team, he’s put himself over the edge. Woods has exactly 2,000 yards on 142 receptions and 11 touchdowns since joining the Los Angeles Rams. He does it all, but he’s not quite elite. He’s right on the borderline so he gets the borderline elite rating. There aren’t many wideouts that you would take over Woods.
Starter: Brandin Cooks – 88 OVR (Madden: 88 OVR) 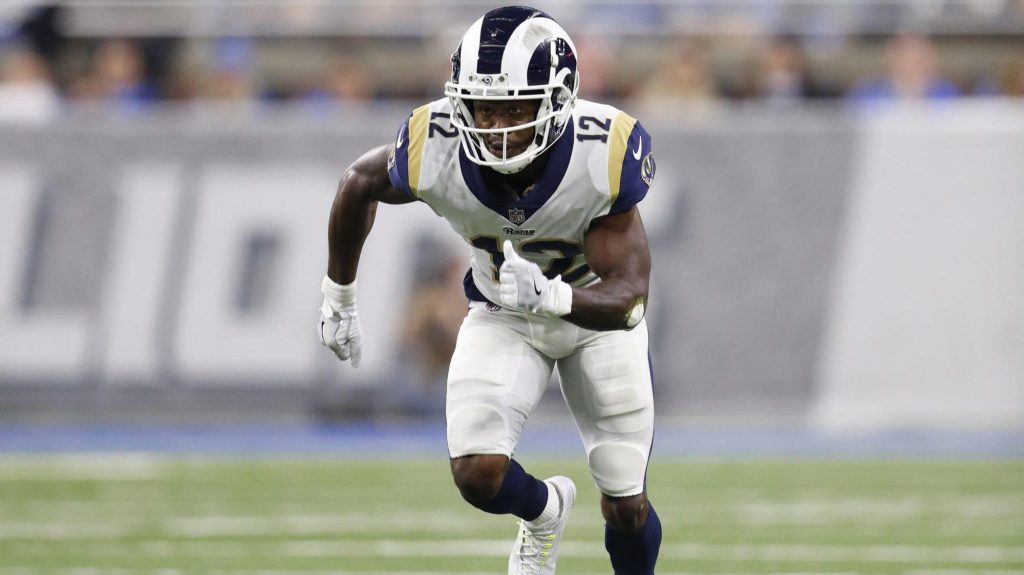 Brandin Cooks is one of the best young receivers in the league, but like Woods he’s not quite elite and is just a tad below Woods in terms of route running and blocking. Cooks, however, is one of the fastest wideouts and is always a threat to take it the distance. Cooks, in his first year with the Rams finished with his best season to date. A few more of those and Cooks could get past that borderline as well.
Starter: Cooper Kupp – 87 OVR (Madden: 84 OVR) 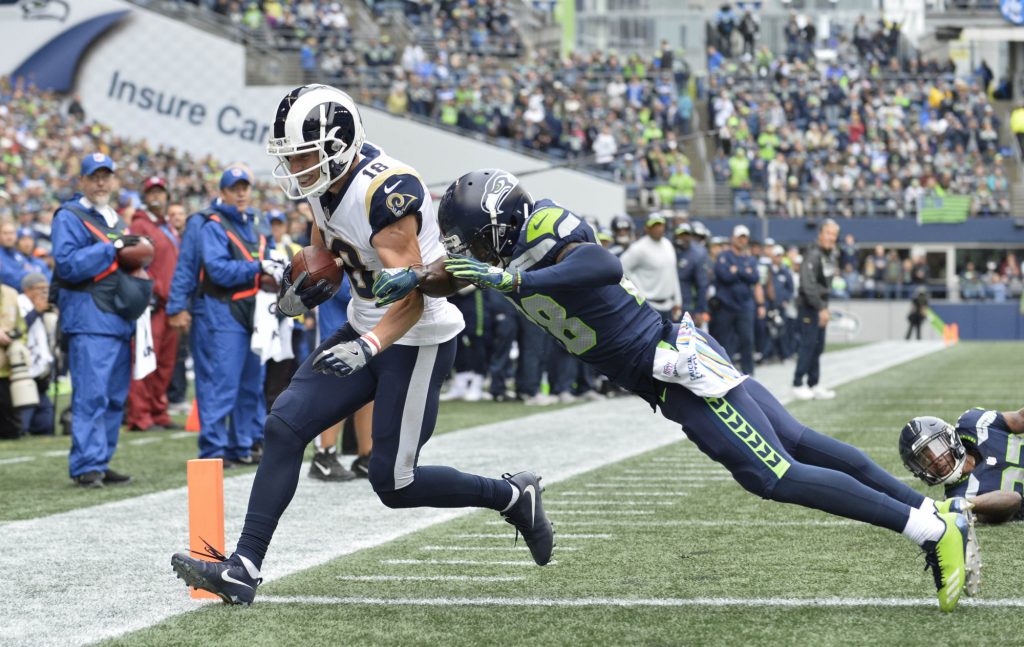 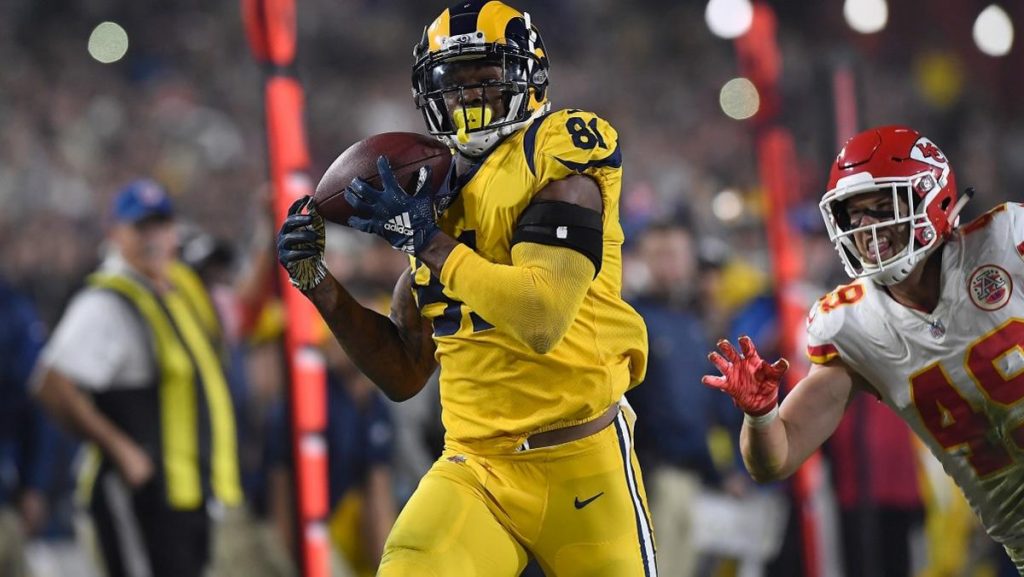 Gerald Everett gets the surprising 82 overall rating from me because I believe he’s better than the stats show. It’s not his fault he was drafted early in the 2nd round to a team that would soon-after make him the fifth option behind the aforementioned Gurley, Woods, Cooks, and Kupp. Without Everett, the Rams might not have defeated the Chiefs last season. He’s had a small sample size, but improved in every way in 2018. Right now, I think the 82 overall rating is fair, but  Madden’s 79 rating is fair as well.
Starter: Tyler Higbee – 80 OVR (Madden: 79 OVR) 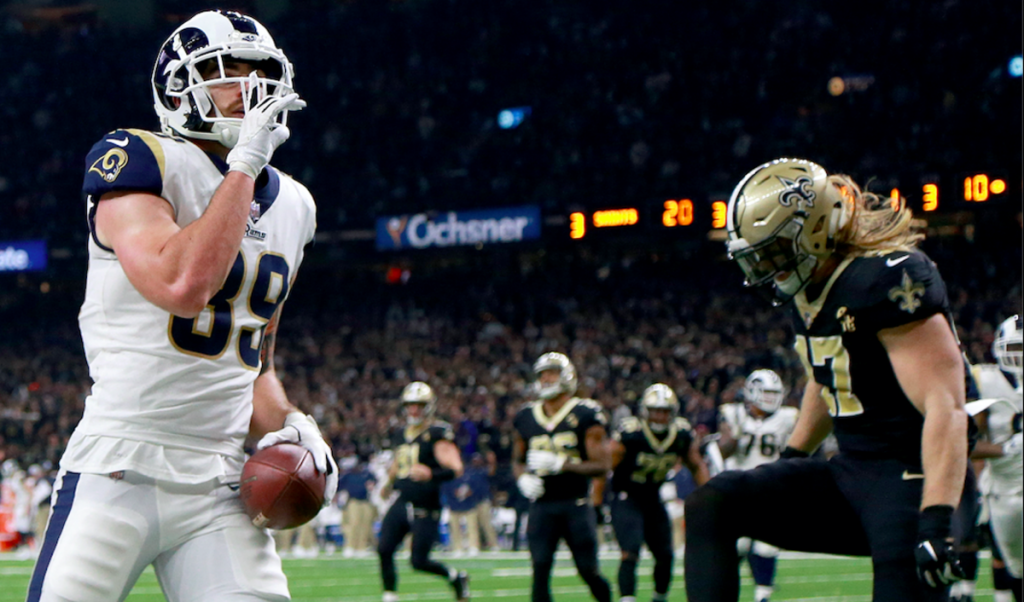 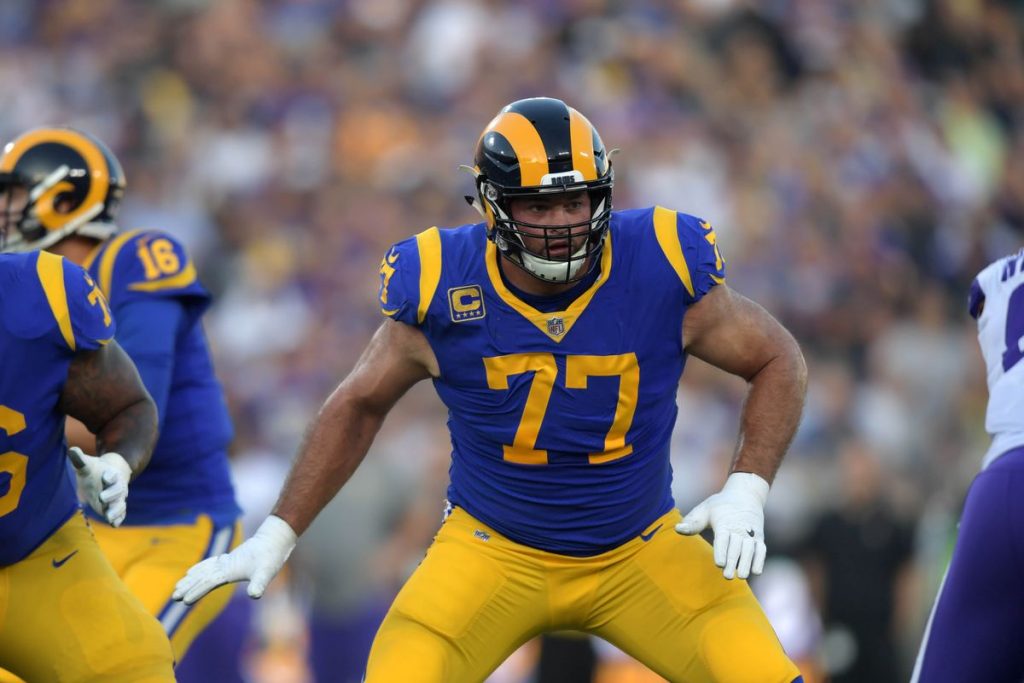 Andrew Whitworth is a future Hall of Famer but I would actually lower his overall rating from what it was in the latest Madden rating. It seems strange to do so, but I have seen a sharp decline in Whitworth as great as he’s been. Many forget how great he was to the point where his tier fall would be at the bottom of the elite tier. He’s that good, and while this is likely his last year, he’s still done plenty to stay in the 90’s club.
Starter: Rob Havenstein – 85 OVR (Madden: 82 OVR) 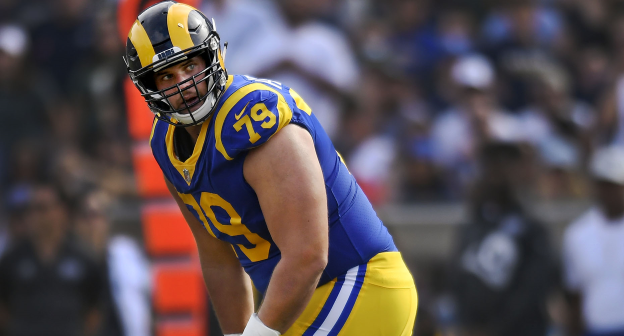 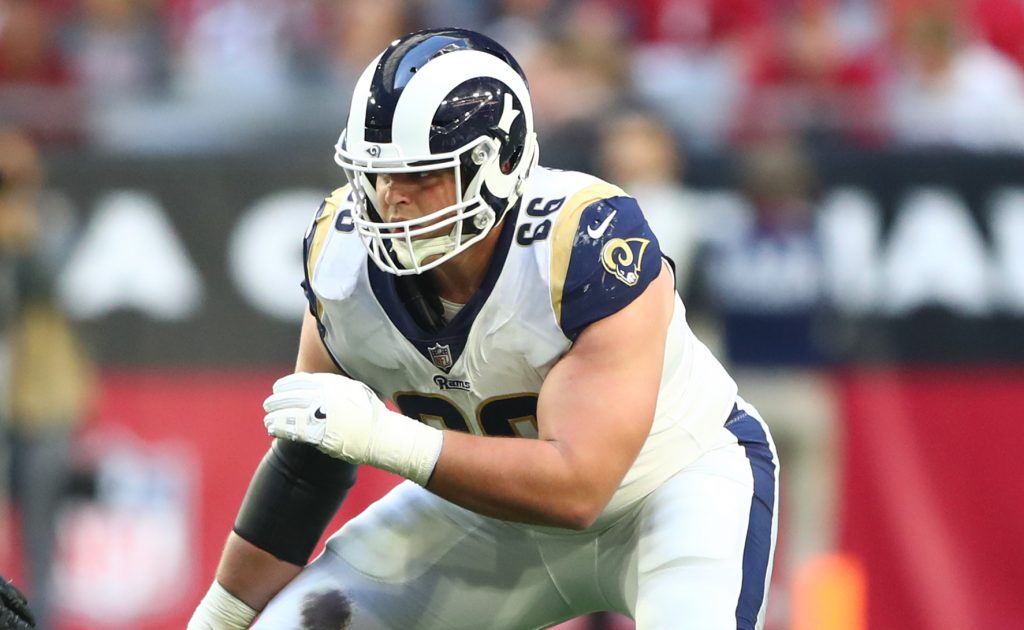 Austin Blythe is a former waiver claim that was originally a seventh-round selection made by the Indianapolis Colts. Blythe found a home with the Rams and offensive line coach Aaron Kromer has led him as well as others to the next level. Blythe could have been graded higher but he simply did not finish the season on the highest of notes. However, I couldn’t take away from the fact he was arguably the best guard in the league aside from Dallas Cowboys guard Zack Martin for the first 11 games of the season. After that stretch, his play faltered, but still, Blythe gets a two-point ratings increase from his rating by Madden.
Starter: Joseph Noteboom – 76 OVR (Madden: 68 OVR) 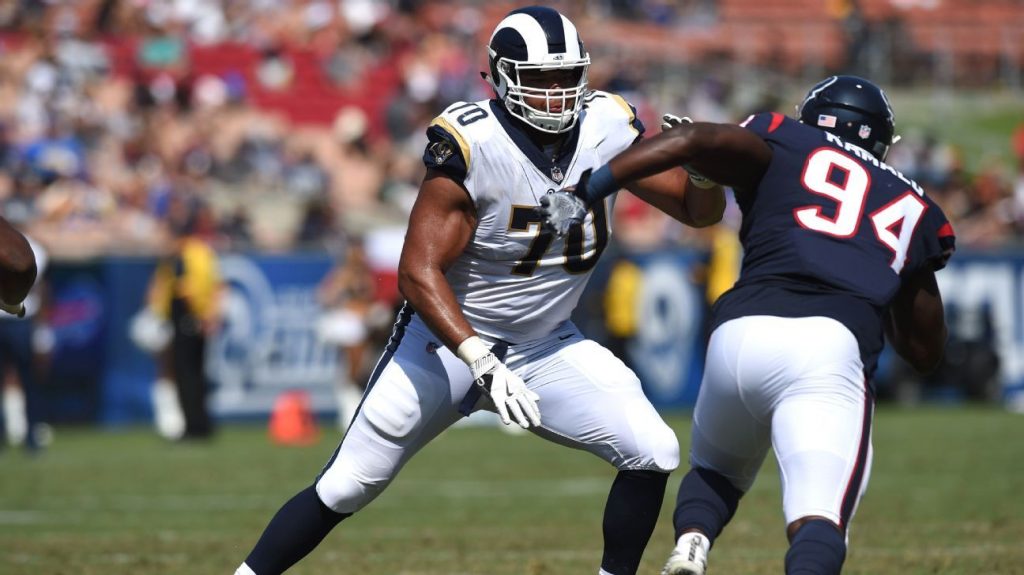 The former third-round pick in the 2018 NFL Draft saw some limited snaps last year on the offensive line. Rodger Saffold has left in free agency which makes Joseph Noteboom the starting left guard. Noteboom is a very athletic offensive lineman with some mechanical flaws. In his limited time last year, he made the most of it and really looked sharp. Due to his athleticism alone, Noteboom earns a solid starter rating of 76 overall. Madden is way too low on Noteboom placing him under the 70 overall mark.
Backup: Aaron Neary – 70 OVR (Madden: N/A)
Backup: Jamil Demby – 68 OVR (Madden: 65 OVR)
Backup: Chandler Brewer – 63 OVR (Madden: N/A)
Centers
Starter: Brian Allen – 72 OVR (Madden: 65 OVR) 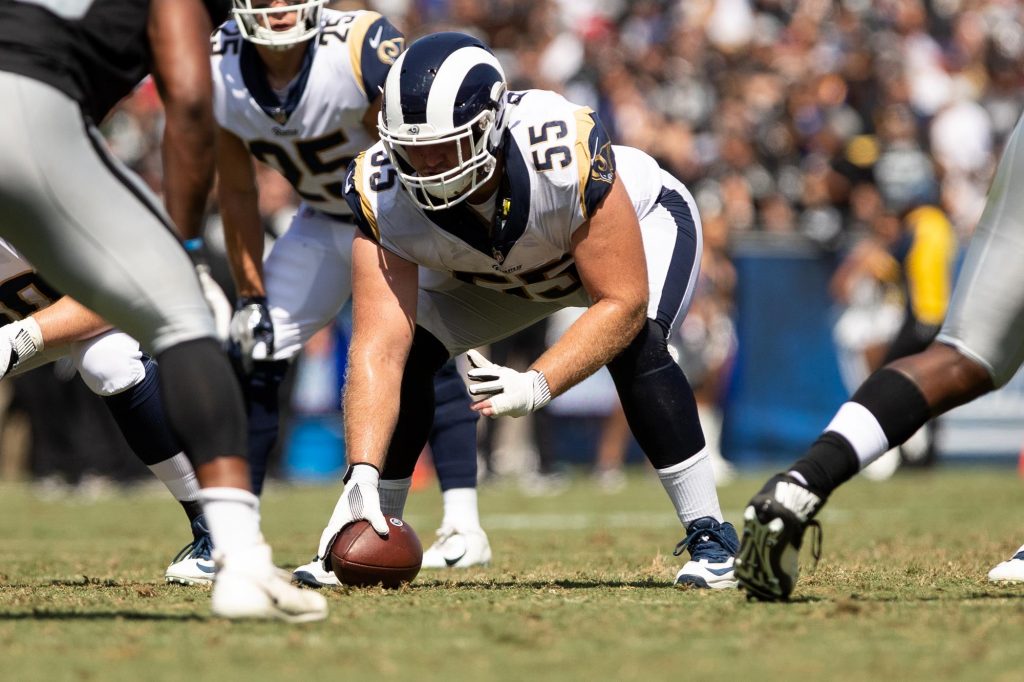 The former Michigan State Spartan is now going to have his opportunity to start at center in the NFL. The Rams decided to move onto the sophomore center over veteran John Sullivan this year. Allen played extremely limited snaps, but I still believe Madden started him off with too low of an overall. I decided to give Allen a starting position of 72 overall in this one which makes him the lowest rated Rams starting offensive lineman. However, Allen can greatly improve on that number moving forward.
Backup: Jeremiah Kolone – 66 OVR (Madden: N/A)
Backup: Vitas Hrynkiewicz – 64 OVR (Madden: N/A)
Which player ratings do you like? Which player ratings do you not like? Let us know down below! The final part of this piece will follow.
0 0 votes
Article Rating

Los Angeles Rams: Why Darrell Henderson is a must get in fantasy football