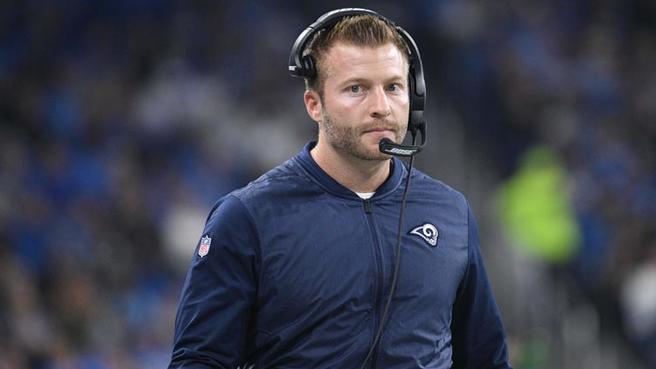 The Los Angeles Rams have told us plenty already this offseason by the moves they’ve made during the draft and free agency. However, that doesn’t mean the fans don’t still have questions. Here are 10 questions that remain unanswered.

1. What About the Super Bowl Hangover?

The last NFC team to make the Super Bowl after losing the first time around was the Minnesota Vikings back in the 1973 and 1974 and each of the last three NFC teams to lose the Super Bowl failed to make it past the divisional round the following year.

Two of the first three games of the season will come on the road against both the Carolina Panthers and the Cleveland Browns with a game against the New Orleans Saints sandwiched in between. That’s not an easy slate of games and the Rams will need to be roaring and ready to go right out of the gates.

The Rams are a well-coached team, but lost leaders on the offensive line in Rodger Saffold and John Sullivan as well as on the defensive side of the ball in Ndomukung Suh and Mark Barron. It’s those types of leaders that usually keep a lockerroom focused. That’s not to say this team is headed for a Super Bowl hangover, but in the matter of one offseason they have gone from hunting to now being the hunted.

2. Which Second Year Players Can Solidify Themselves as Starters?

The Rams are putting a lot of expectations on their second year players. Joseph Noteboom will come in to start at left guard and Brian Allen will play at center. On the defensive side, the inside linebacker spot will be Micah Kiser’s to lose. Those are three first year starters in key positions, specifically with Noteboom and Allen on the offensive line.

The good news in this is that these players have had a full season to learn and this will be their second offseason in the system. The game should move slower for them because of that. There will be a lot of expectations on this trio of sophomore, and it remains to be seen ion they will rise up to the challenge.

3. Will the Rams Offense Continue to Not Skip a Beat Despite Another Change at Offensive Coordinator?

After Sean McVay’s first season it was Matt LaFleur who left for the offensive coordinator position at Tennessee to get the opportunity to call plays. McVay promoted Zac Taylor and the Rams didn’t skip a beat. However, this will be the third straight year that the Rams will have had a change with Taylor leaving to become the head coach in Cincinnati.

While this is Sean McVay’s system and we shouldn’t expect any drastic changes to the offense this will be the first time the Rams won’t have a coach listed as an offensive coordinator. While LaFleur and Taylor didn’t call plays, they were a key component in game planning. Those duties will now be split between McVay, Waldron, and Kromers. Those are a lot of coaches essentially filling one role. All signs point to it working, but that doesn’t mean it isn’t unprecedented.

4. What does Clay Matthews Have Left in the Tank?

The Rams needed edge help this offseason and while they didn’t draft anybody they did bring back Fowler and sign Clay Matthews. Matthews returns home to play in Los Angeles after his worst season production wise as a pro. At 33 years of age and his best years behind him, how much does he still have to give?

Unlike when Les Snead signed Andrew Whitworth, he was still one of the most dominant left tackles in the league. Even John Sullivan had been a solid piece in Minnesota and Aqib Talib the same in Denver.

Matthews only produced 3.5 sacks last year which was just a half sack more than Samson Ebukam. Will being home in Los Angeles give Matthews a resurgence? We’ll find out. But if the former Green Bay Packers’ star can put up 5.0-7.5 sacks, Rams fans will be more than happy.

5. Are the Rams in Better Shape on the Offensive Line Than Expected?

When you lost Rodger Saffold and John Sullivan, it’s hard to say your team got better on the offensive line. While the Rams maybe didn’t get better, they may be better than many fans expect them to be up front. It’s never easy to lose 40% of your offensive line, but the Rams prepared for this.

Last season they drafted both Noteboom and Allen knowing very well that Sullivan and Saffold could leave and Whitworth may even retire. In last year’s preseason, Noteboom didn’t allow a single pressure and Brian Allen brings the intelligence needed for the center position. Both players have had a year to sit behind and learn from three of the best offensive linemen in the game which doesn’t hurt.

The Rams also drafted Bobby Evans and David Edward, giving the position depth that it hasn’t had in quite some time. That’s not to say there won’t be a learning curve or bumps in the road, but with Kromer still on the coaching staff, the Rams should be just fine.

5. What Will the Rams Do at Linebacker?

This will be anybody’s job for the taking with it being Micah Kiser’s job to lose. Outside of Kiser, the team has Bryce Hager, Dakota Allen, Natrez Patrick, and Troy Reeder.

Hager is in his fifth year while Allen, Patrick, and Reeder are all rookies. However, if someone like Patrick can really show out during camp, they could easily take control of the position. There is serious opportunity here and all eyes will be on this camp battle all summer.

This might be a question that we never get a straight answer to. It was reported that Gurley has arthritis and the Rams have neither confirmed nor denied it. What happened to Gurley at the end of last season is one of the more mysterious events in Rams history. The question is, will that mystery continue into 2019 or will the MVP candidate of the last two years return to his dynamic self?

By drafting Memphis’ Darrell Henderson in the third round, the Rams not only selected a versatile player for their offense, but also have a serious backup plan and insurance piece if Gurley doesn’t return to form. It will be interesting to see how McVay and co. handle Gurley’s workload and there is no doubt fans will keep and close eye on it.

8. How Will Gerald Everett Handle The Most Important Offseason of his Career?

Gerald Everett heads into year three. Aside from a flash here and there, he has yet to show much at tight end after being drafted in the second round in McVay’s first draft as the Los Angeles Rams’ head coach. Brian Quick showed flashes, Tavon Austin showed flashes, Sam Bradford showed flashes. At some point point those flashes need to become the norm rather than the exceptions. If they don’t, it might be time to move on.

When given the opportunity to take over as the threat in the middle of the field last season after Cooper Kupp’s injury, he didn’t really take advantage. Despite his targets nearly doubling in week’s 13-16, going from an average of 3-4 per game to 5-7, he failed to eclipse 50 yards receiving.

Everett has one game of 50 or more yards and that came in the second game of his career. With the tight end being such an important piece in the modern NFL offense, the time is now for the third year player.

9. How will Cooper Kupp and Ogbonnia Okoronkwo Handle Coming off of Injuries?

Even in modern medicine, ACL injuries are some of the most difficult injuries to come back from, especially at a position like wide receiver when you are making a large amount of cuts and need to have faith in your knees. In that first season coming back from injury, players tend to play timid and afraid to put full pressure on the affected knee, hoping to avoid re-injury.

With a shifty player like Kupp, it will be curious how he handles the injury. Does he come back as the same player right away or will it take time for him to gain confidence? He was one of the Rams’ more dynamic weapons prior to the injury and there is no doubt the team missed him and will be excited to have him back.

On the other hand, Okoronkwo is a player Rams fans were excited about last year in training camp, however, a foot injury put him on the PUP list to start the season and he never really got going. The team needs a spark off the edge and they would be more than happy if that spark could be Okoronkwo.

10. How Much Playing Time Can We Expect From The Rookies?

Back in April the Rams drafted intriguing players in Taylor Rapp, Darrell Henderson, Greg Gaines, Bobby Evans, and David Long. However, in each of those positions, with the exception being Gaines, the Rams already have established starters. The team signed Eric Weddle to play safety next to John Johnson. Darrell Henderson will obviously be splitting time with Gurley. Rob Havenstein and Andrew Whitworth anchor the offensive line at the tackle positions. Finally, at cornerback the team has Aqib Talib and Marcus Peters.

Rapp and Henderson will certainly have their packages on offense and defense. Weddle is in his 30’s and the Rams will be looking to preserve Gurley. David Long will most likely even get some looks at cornerback. However, for the most part it looks as if the team drafted a lot of depth. That isn’t a bad thing, but it does mean there may not be a ton of production from this rookie class right away much like last year.

Greg Gaines will most likely be the lone starter with the Rams moving to a more traditional 3-4. He’ll be the space eater in the middle of the defensive line that they have lacked over the last two years since making the switch.