Enough of the Los Angeles Rams Rookies, Let's Look at the Sophomores 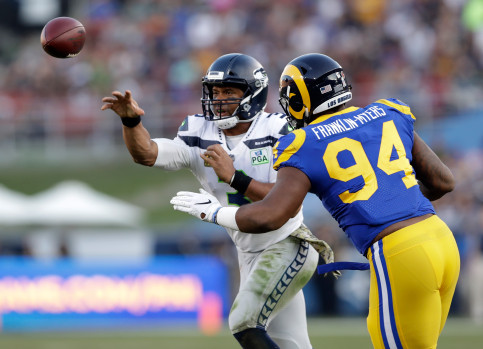 The NFL Draft is a little less than a month old and we know for the most part who the Los Angeles Rams’ rookies are minus a few undrafted free agents that they might sign before training camp. However, while all of the focus has been on the rookie class, it’s the sophomores fans should have their eye on.

Unlike most teams, the Rams have had the luxury of drafting for the future and not putting the pressure of starting right away on many of their rookies. When a team takes a player on day one or two of the draft, fans expect that player to be able to contribute right away. With the Rams, that hasn’t been the case.

Last season the Rams had just one pick on the first two days of the draft – that player was Joseph Noteboom. Not a single 2018 rookie started a game last year. However, despite no starts, the Rams got production out of John Franklin-Myers and then Brian Allen and Noteboom each got limited work on the offensive line.

With that said, these players will be expected to produce after what was a “redshirt year” in college terms. Let’s take a look at the Rams’ sophomore class.

With Rodger Saffold departing in free agency, it will be expected that Noteboom take over at guard while Andrew Whitworth plays out the final year of his contract and potentially retires. During the preseason, Noteboom didn’t allow a single quarterback pressure. The Rams expect Noteboom to be ready and hit the ground running this fall.

Allen is in the same situation as Noteboom. The Rams didn’t bring John Sullivan back for a third season and will be expected to come in and take over the starting role at center. Allen is a smart player and his 77.8 pass blocking grade ranked third among Rams offensive linemen on Pro Football Focus.

John Franklin-Myers became a very good situational pass rusher for the Rams last season and it should be expected that he continues in that role and continues to develop. The fourth round pick made an impact right away as a rookie, forcing a fumble against the Vikings and recovering a fumble against the Chiefs. He also sacked Tom Brady for the first time in the postseason during the Super Bowl. The Rams have a good player in the making here.

In the fifth round the Rams took Micah Kiser out of Virginia Tech. Many fans expected him to contribute as a rookie, but that was not the case. Kiser had just four tackles last season on defense and seven on special teams. The Rams didn’t bring back Mark Barron and Kiser will be the favorite to start inside next to Cory Littleton. He’s quick diagnose plays and a tackling machine which bodes well for an inside linebacker, but with no experience as a rookie, and not a real backup option, he’ll need to learn quickly.

The Rams need help on the edge and they will expect Okoronkwo to contribute in year two. The 2018 fifth round pick started the season on the PUP list after having to go through a foot surgery in training camp. He was a fan favorite after the team drafted him and will have high expectations. With Dante Fowler and Clay Matthews, Okoronkwo will most likely be a situational pass rusher and will look to jump Samson Ebukam on the depth chart.

John Kelly had a superb preseason as a rookie, but when he got his opportunity in the regular season after Todd Gurley’s injury, he disappointed to say the least. The Rams drafted Darrell Henderson which will take over any role that Sean McVay would have had for Kelly. He will be competing for a roster spot in training camp.

Demby was cut by the Rams in the last round of cuts and signed by the Detroit Lions. The Rams then signed Demby off of the Lions’ practice squad in December. With the team drafting Bobby Evans and David Edward as well as the undrafted free agents they have signed, it’s going to be an uphill battle for Demby to make the roster.

The Rams may have drafted Joseph-Day’s replacement in Greg Gaines this draft. The Rams will hope the second year player sticks on the roster as good depth.

Young played in played two games in 2018 and recorded one fumble recovery. Young is an intriguing player that will most definitely be competing for a roster spot in camp. However, he took advantage of his opportunity last season and if he can prove to be an effective player, there will certainly be a spot for him.

Howard signed a futures contract with the Rams in February which means they saw something in him last year. He’ll get a chance to compete for a roster spot in camp.

Lawler played in six games and recorded six tackles as a rookie. Lawler projects as an edge defender and with that being a thin position on the Rams’ roster, there will be a spot for him on the roster if plays well in camp.