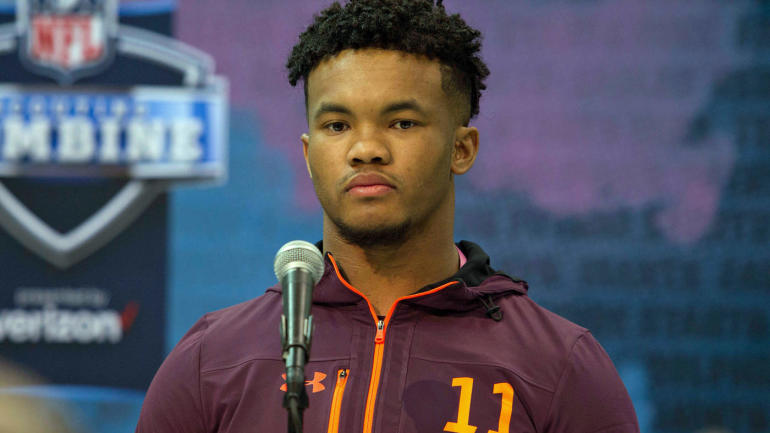 The NFL Combine is officially over. 40-yard dashes have been ran, 225-lbs bars have been raised, the rumors have been spread. Let’s dive right in to my mock draft post combine.

At the end of the day, I believe the Cardinals trade out of the first overall pick with Oakland who ends up taking Kyler Murray. The Cardinals need to be able to protect Josh Rosen and Jonah Williams is the next Joe Staley.

The 49ers stand pat and get their guy. Nick Bosa is the best player in this draft and there’s not really any debate to be had about that. The 49ers covet Bosa and would be lucky to be able to get him.

There are some that feel that Williams is better than Bosa. He’s a disruptor inside and gives the Jets an elite player on the interior of their defense.

Remember how I said I think the Arizona Cardinals trade back? This is where I think they trade back. Kyler Murray will be the number one overall pick come draft time. The Raiders have Carr, but with no ties to Gruden and a disappointing first year, it’s going to be tough for Mark Davis not to convince Mayock and Gruden to take Murray.

Taylor is an elite offensive line prospect. He has elite traits, but he does have his issues. There are parts of his game that remind me of Greg Robinson, but he’ll have good coaching with Bruce Arians.

The Giants must move on from Eli Manning – it’s time. Haskins is a perfect fit in Pat Shurmur’s scheme and finally give the G-men a future at the position.

Brian Burns might be the second best edge player in this class and he only solidified that at the combine. The Jaguars are going to put a lot of money into Nick Foles, meaning they won’t be able to keep everybody on the once stacked defense. They regroup with an elite edge rusher here.

Oh boy did the Detroit Lions get lucky. They arguably get a top-three player at number eight. The Lions struggled getting to the quarterback last season and hope to fix that with Allen.

He may not be my top-rated wide receiver, but there is no questioning the high-upside of Metcalf. The kid is a physical monster that the NFL hasn’t seen since maybe Calvin Johnson. The Bills get their weapon for Josh Allen.

The Broncos did trade for Joe Flacco, but I don’t think that will or should deter them from taking a quarterback in the first round. Drew Lock. He has the best arm talent that the Denver will have seen since Jay Cutler and will be able to push the ball down the field to that team’s talented group of weapons.

Zac Taylor comes from a place that took Andrew Whitworth away from Cincinnati and reaped the benefits while the Bengals suffered because of it. Taylor gets his team an offensive tackle to protect his quarterback’s blindside, whoever that may be.

The Packers need to be able to put pressure on the quarterback defensively and Clay Matthews’ days as a member of the green and gold are coming to a close. Sweat is an elite pass rusher than can take over the reigns from a first ballot Hall of Famer.

The Dolphins took Minkah Fitzpatrick last year and found themselves an elite safety. They can turn into one of the scarier secondaries in the NFL by taking Murphy.

The Falcons would be throwing a party in their draft room if Oliver falls to 14. After this offseason Atlanta is going to have to put back together its defensive front and Oliver is a fantastic start.

The Redskins already have one of the best offensive lines in the NFL and adding another player to the interior with the talent level of Ford only improves that. Washington will be ready to unleash its highly touted rookie running back from last season.

Finding a fit for Rashan Gary won’t be easy, but a defensive coach like Ron Rivera would be a great landing spot for the highly talented edge defender.

The Browns have done a great job in the draft over the last two years. Here they have a top-five player fall right into their laps.

Chris Lindstrom is a mean guy to have on an offensive line. The Vikings must get better up front to not only help Kirk Cousins, but also open up holes in the running game. Lindstrom does just that.

I will remain in the boat of the Titans need to do everything they can to put weapons around Marcus Mariota to give him one last fair shot before cutting ties with a, what has been to this point, a very mediocre quarterback. Drafting Hockenson gives Mariota no more excuses.

This pick may shock some as the popular pick would probably be Greedy Williams. However, Ya-Sin’s tape is there and he has a rock solid (Pun VERY MUCH INTENDED), combine. It’s time to start talking about Ya-Sin as a first round talent.

The Seahawks thrived when they had safeties Kam Chancellor and Earl Thomas. Picking up a safety like Gardner-Johnson would help rebuild what was once known as the Legion of Boom.

With Alex Collins out in Baltimore, the Ravens need to give Lamar Jackson not only a run game, but an offensive weapon. While not my top running back, there is no denying Jacobs’ talent.

Deshaun Watson faced some of the most pressure of any quarterback last season. The Texans must rebuild that offensive line and Risner is a great piece to build around up front.

The Raiders addressed the offense with the first of their three picks – now it’s time for the defense. Ferrell isn’t elite by any means, but is a solid edge rusher no less. Gruden drafts an edge rusher with the same pick that he traded away his elite one for.

After the 2013 season Chip Kelly flat-out cut Desean Jackson. The Eagles have been looking for that type of explosive receiver ever since. They finally get it with Hollywood Brown who would flourish in Philly.

A little bit of a run on wide receivers here. Harry is my top-rated wide receiver and gives the Colts another option outside of T.Y. Hilton.

The Raiders took their quarterback of the future earlier and now give him a weapon. Some could argue that Fant is better than Hockenson. Either way, Murray will be happy he has an elite talent to throw the ball too.

This is scary. The Chargers already have elite defensive talent with Melvon Ingram and Joey Bosa. Adding Wilkins to compliment that seems unfair.

The Chiefs secondary was downright awful at times last season. Adderly gives Kansas City a true ball hawk on the back end and someone to build around for the years to come.

The Packers have struggled to protect Aaron Rogers in the past. With his career nearing its end, it’s time to make that a priority.

Jachai Polite may be one of the top-five biggest losers of the combine. He didn’t run a good 40 and he didn’t do well in interviews. However, watching the tape, there is no doubt that this is top-15 level talent. Polite met with the Rams and mentioned that it went well compared to other teams. This is a perfect fit for both sides.

The Patriots struggled at times last season against teams that ran the ball inside. Tillary has inconsistencies, but gives Belichick a versatile player on the defensive line.