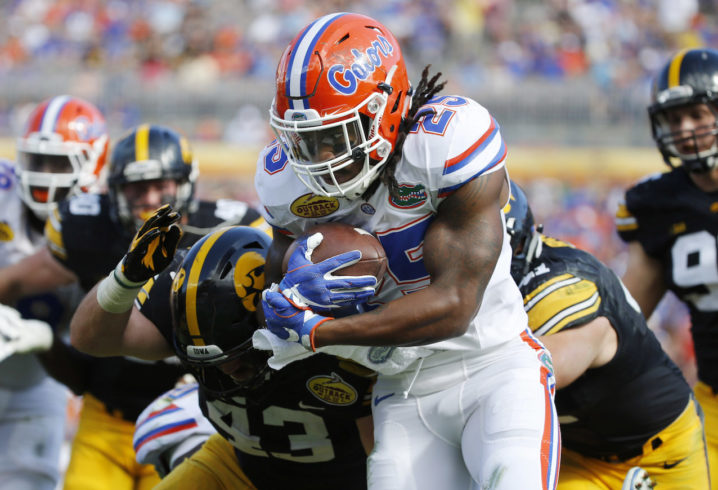 When Malcolm Brown went down in week 13 with a broken clavicle, the Los Angeles Rams realized then more than ever how reliable of a backup Brown had been. Then when Todd Gurley hurt his knee against the Philadelphia Eagles, the Rams were left with a huge hold at the running back position.

That left the team with a lot of inexperience at the position in rookie running back John Kelly and second year player, Justin Davis. Kelly and Davis played well in the preseason, specifically Kelly who showed his play-making ability. The Tennessee running back racked up the third-most rushing yards in the preseason and his 4.3 yards per carry ranked second among running backs with 45 or more carries.

Unfortunately, that did not translate to the regular season. In December,  Kelly had 27 carries for just 74 yards, averaging 2.7 yards per carry. Justin Davis saw limited action with just two carries for 19 yards.

At that point there was no question Les Snead needed to find a solution and that he did.

Rams fans know the rest. The team signed CJ Anderson who found new life under Sean McVay. While that did not bring a Super Bowl trophy to Los Angeles, the Rams patched a hole late in the season.

There is no doubt that there is some promise with John Kelly, however, with Malcolm Brown set to hit free agency and the uncertainty of bringing back Anderson, while running back won’t be a point of emphasis during the draft, it should be a position that the Rams at least look at. That is especially the case given the unknown status of Gurley’s knee.

The Rams won’t be going after the top running backs, but here are some day-three guys that could be options:

Mattison does’t have that extra gear to separate from defenders, but he does everything else well. At 5’11-214, he’s one of the tougher runners in the class. Everything about Mattison is forward. He won’t dance in the backfield and when he finally goes down, he falls forward.

He’s a big back, but he also has the speed and athleticism to hit the corner, bounce outside, and occasionally hurdle over defenders in the open field, much like Gurley.

Mattison is most likely a day-three or undrafted player, but projects to be a rotational player at the next level.

Ryquell Armstead is a guy that’s build very similar to Malcolm Brown and is the one guy on this list that was at the Senior Bowl. I had to cover my Snead bases here and put at least one guy that was in Mobile on this list.

He fits best with a zone running scheme which is what the Rams’ offense is based on. The Rams don’t need to draft a running back on the first two days and Armstead will be available on day-three.

If the Rams are looking for a running back of the similar build of Malcom Brown, look no further than Darrin Hall. At 5’11-216, he is a physical runner that runs with power and battles for every yard.

Another guy that the Rams could draft on day-three or sign as an undrafted free agent.

Imagine Todd Gurley as a 4th or 5th round talent. That’s Jordan Scarlett. They are two very similar backs in terms of style, but Scarlett doesn’t have the play-making ability and isn’t as refined as Gurley was. Scarlett is an explosive, decisive back with good vision, that is going to be a steal for whatever NFL team drafts him.

Scarlett is my sleeper running back in this draft and there is a good chance he falls to day-three given the talent at other positions in this class.

When Ozigbo didn’t get invited to the NFL Combine, I was thoroughly disappointed. Most players who don’t go to the combine either end up as late day-three guys or don’t even get drafted. The Combine, as unimportant as fans make it, is a huge job interview for these kids, and when someone as talented as Ozigbo doesn’t make it, it is disappointing.

The running back from Nebraska may be one of my favorite running backs in this class. He’s my RB3, but there little chance that he goes as high as I have him graded.

The three things that stand out the most to me with Ozigbo is his burst, elusiveness and his ability to catch the ball. At 6’0-230 he runs with strength and power but possesses impressive lateral quickness and speed for a guy of his stature.