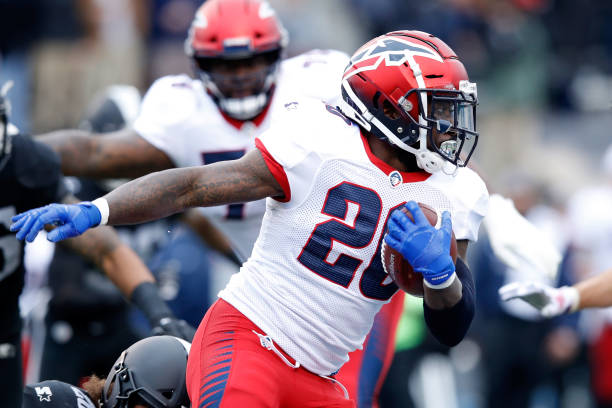 Zac Stacy is quickly becoming the best running back in the AAF. After starting off the year as the number two back behind former Rams running back Terrence Magee, Stacy has surely handcuffed the starting job to himself. Stacy ran efficiently in the Birmingham Iron blowout loss but the issue was the coaching staff refused to give the ball to Stacy and instead forced QB Christian Hackenberg to throw it and that led to the blowout.

In this contest, the Memphis Express squared off against arguably the best team in the AAF right now in the Arizona Hotshots, but this time the coaching staff unleashed Zac Stacy who scampered his way to 101 yards on 19 carries which, believe it or not, is the first time this season any single player had rushed for 100 yards or more in a game. Stacy’s express fell short 20-18 but he continued to show top-level stuff, weaving through traffic on a few impressive chunk runs. Stacy’s longest run of the day went for 49 yards and he even found pay dirt in this game which was huge for the Express. While the team falls to 0-2, Coach Singletary’s group needs to feel optimistic that they may have found themselves in this game. Their identity on offense needs to be a minimum of 25 carries for Zac Stacy.

As for the other former Rams, Magee added six carries for 17 yards and Davis Tull had a tackle for a loss to go with two solo tackles. Thus far, the two killer former Rams have been QB Luis Perez and RB Zac Stacy, the rest have flashed or have not done anything.

Memphis sits at 0-2 after a tough loss but as previously mentioned, they may have found the recipe for success with Zac Stacy this weekend. They head to Orlando to take on the Apollos next Saturday at 8PM ET/5PM PT on NFL Network.

With a Deep Safety Draft Coming Up, Why Would the Rams sign any Safety in Free Agency?