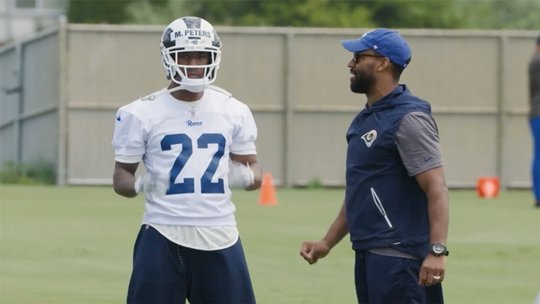 It has been awhile since we first heard the news that the Cincinnati Bengals requested to interview the Los Angeles Rams defensive backs coach. Many fans quickly hit the panic button when in typical Sean McVay fashion, the Bengals were granted permission. Sean McVay is known for allowing and encouraging his staff to climb the NFL ladder to bigger and better. Aubrey Pleasant is an up and coming, if not already here, NFL coach.  Pleasant has even been tabbed as a, “head coach in this league soon” by former defensive back DeAngelo Hall. Pleasant certainly seems to be a name to look out for as NFL teams are always poaching talent in the offseason. But is that time now? Could he make the move sooner than later? Is Aubrey Pleasant slated for a quick stop as a defensive coordinator on his way to a head coaching vacancy in a couple years?

Aubrey Pleasant played his college career as a safety at the University of Wisconsin. In 2012 Pleasant spent time at the University of Michigan as an assistant defensive backs coach. After coaching with the Wolverines, Pleasant parlayed that into various roles with the Washington Redskins from 2013-2016. He also spent time with the Cleveland Browns in 2014 as a head coach intern. With 7 years of experience under his belt in the NFL, Pleasant has made a name for himself quite quickly. This is likely due to Pleasant being 31 and having the same exuberant energy as Sean McVay himself, not to mention being able to learn from one of the best defensive coordinators in Wade Phillips for the last two years. Many people have speculated the Pleasant could be the de facto successor to Wade Phillips when he retires and many would suggest that would be a great move by the Rams and Pleasant. What we don’t know is Wade Phillips’ timeline and if Aubrey Pleasant and the NFL circles can even hold out long enough to see that future take place.

New Bengals head coach and former Rams quarterbacks coach, Zac Taylor looks to finish up his staff and Pleasant would make a ton of sense. Names that were dropped originally for the Bengals DC position; Jack Del Rio, Dom Capers, and Dennis Allen have already been ruled out. Other names that have come out as possibilities include; Marquand Manuel, Mike Elko, and Aaron Glenn. Manuel has eight years of experience, spending time with the Seahawks from 2012-2014 and then the Falcons from 2015-2018 as a defensive backs coach and as a defensive coordinator the last two years. Mike Elko has 20 years of experience spending time as a defensive coordinator with Notre Dame, Wake Forest, Bowling Green, Hofstra, and most recently Texas A&M. Aaron Glenn has 5 years of experience. Glenn played 14 season in the NFL and started his coaching career as the Brown’s assistant defensive backs coach from 2014-2015. He has been the New Orleans Saints defensive backs coach since 2016.

Time will tell, although if I had to put money on this, I think Todd Grantham will be the Bengals new DC. I think Aubrey Pleasant will stay with the Rams for the 2019-2020 season and if Wade Phillips retires after that, Pleasant is likely the Rams top choice for their DC position. If the son of Bum doesn’t retire, Pleasant is likely gone after next season unless the Rams defense crumbles completely. Regardless, Aubrey Pleasant is a name that will continue to pop up in offseason poaching rumors next year and deservedly so. Aubrey Pleasant is definitely a guy Rams players and fans alike seem to be really high on and the NFL is taking notice fast.