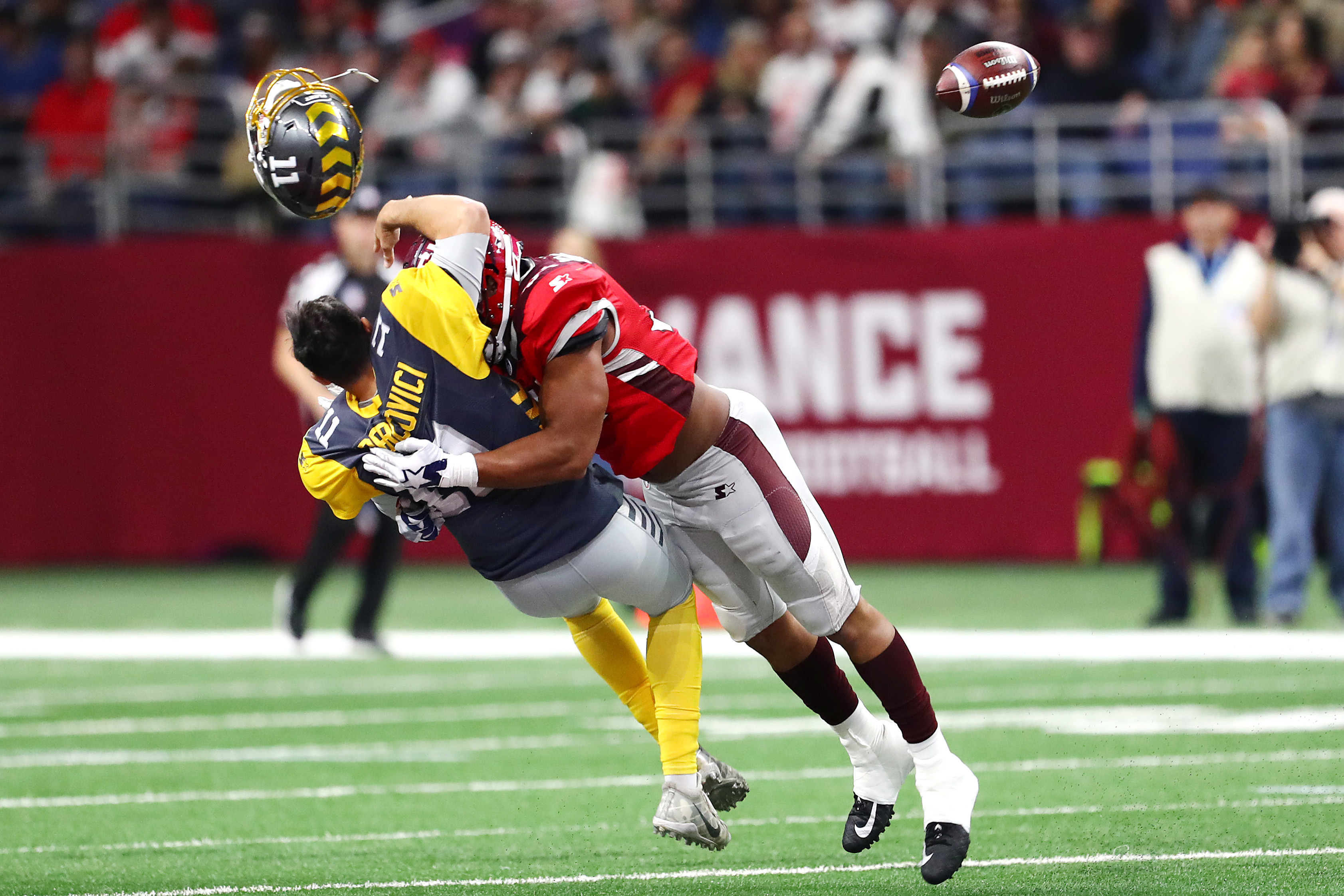 It was quite the exciting debut night for the Alliance of American Football and the above picture really indicates the type of physical play and meaningful play that the AAF’s newfound audience received. However, for Fleet fans, coaches and players it didn’t end as well as they hoped.

The San Antonio Commanders won the game and a lot of this was thanks to their defense that sacked week one starting QB from Arizona State and formerly with the Los Angeles Chargers, Mike Bercovici…not one…not two…not three…not four…not five…nope six teams. Bercovici felt the pressure from the get-go receiving plenty of contact including the most notable strip sack via Shaan Washington who blasted Bercovici in a hit that echoed across the entire AAF fanbase. The issue was Mike Martz seven-step dropback offense paired with a revolving door offensive line led to the starting signal-caller getting mashed all game long. Bercovici finished the game with 176 passing yards and two interceptions, he was replaced later on in the game by backup QB and former East Carolina QB Philip Nelson who appeared to have more mobility to handle the lack of protection that Bercovici had all game but still ended up creating zero points and throwing an interception in this contest.

The Fleet were simply unable to get in the end zone although they received some encouraging play out of their RB Ja’Quan Gardner formerly from Humboldt State, who ran for 55 yards on eight carries and added 17 yards on two receptions. Gardner proved to be the reliable back and likely surpassed former NFL RB Terrell Watson on the depth chart. To add to that former Cowboys TE Gavin Escobar had 66 yards on four catches, Brian Brown had five catches that also went for 66 yards and Dontez Ford caught three passes for 56 yards. It wasn’t a prolific offensive performance from either team but the Fleet certainly had a harder time struggling and going vertical in Martz vertical offense.

On the Commanders side of the offense, former Rams and TCU RB Aaron Green ran six times for 43 yards and looked sharp when San Antonio gave him the rock. Former Chargers RB Kenneth Farrow II started the game and plowed his way into the end zone for the team’s only score. Other contributing factors were: Mekale McKay finishing with five catches for 80 yards and displaying that he is already one of the best in this league, Alonzo Moore, three catches for 78 yards displaying serious deep threat ability and the former Houston QB converted WR Greg Ward Jr. coming down with five catches for 65 yards.

As far as the defense went, the Fleet ended up with two interceptions on Commanders starting QB formerly drafted by the Bengals, Logan Woodside. The Commanders really dictated the game and even though the score was 15-6, this game could have been a complete blowout if not for the Fleet defense. Ron Brooks came down with a red zone interception that appeared to put the Fleet right in the driver’s seat to steal the momentum, but they were unable to capitalize off of that. Kicker Donny Hageman who was signed two days ago nailed both field goals but the story of the game was that the Fleet no matter how hard they tried, could not get in the end zone. Martz squad falls to 0-1 on the season and will have an opportunity to bounce back as they host the Atlanta Legends in their home opener, a team that just lost 40-6 to the Orlando Apollos. As mentioned following last night’s game, the Fleet will start Philip Nelson next week.