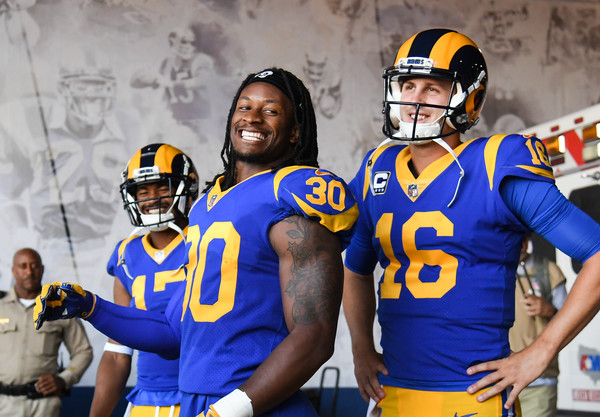 Undoubtedly two of the LA Ram’s biggest stars are their young Quarterback and Running Back. Jared Goff (23) and Todd Gurley (24) at both under 25 are both prime candidates to feel the pressure of the impending biggest game of their lives in Sunday’s Super Bowl LIII. Not only are the dynamic-duo young, they are also relatively inexperienced when it comes to playing in big games and must learn to overcome that inexperience for the Rams to win their first Super Bowl in 19 years.

Much has been made of Jared Goff’s mental state throughout the play offs with him being described as the cool California kid with a dry wit and an even-keel attitude. At only 24 years old Jared is going to be one of the youngest ever Quarterbacks to play on what is undoubtedly one of the biggest sporting stages in the world.

The youngest ever Quarterback to win a Super Bowl was Ben Rothlisberger at 23. Winning is what he is remembered for but also for how badly he played with a stat-line of 9 completed passes from 23 attempts, 123 yards, zero touchdowns and two interceptions. An obvious sign of immaturity and possibly crumbling under the pressure of the spotlight.

Likewise, Todd Gurley has not been his normal self. After suffering a suspect knee injury that was described as “banged up” and “swollen”, not much else has been mentioned of the particulars of the injury. After resting Todd through the final games of the year to get his knee right and get the confidence in his body in order to make cuts, hurdle, spin and generally do the freakish things that make him a special athlete, he has suffered from a case of drops and seems to not be hitting the line of scrimmage with the same intensity that he was during the regular season.

During both their collegiate careers both Jared and Todd were not blazed in the fire of an overt amount of pressure.

Gurley having gone to the more prolific college in the Georgia Bulldogs went to two Bowl games, winning only one of them, the 2013 Capital One Bowl against Nebraska Corn Huskers. In the 2014 season Gurley was suspended for making roughly $3,000 from signed memorabilia before then tearing his ACL and declaring for the draft.

Goff’s college career at the California Golden Bears was even more of a vacuum of success. In his first season taking over as the starting Quarterback for the Bears he went on to have a losing season to the tone of 1-11. It took three seasons before Goff could lead his team to a winning 8-5 season and on to a Bowl game, the Armed Forces Bowl in 2015 against Air Force Falcons. Goff and the Bears won the game with the young Quarterback being named the MVP.

Moving onto their professional careers neither player had faced the post-season until last year and when they did the results were not in their favour. Even worse than that Jared Goff as the number 1 overall selection in the draft faced losses in his first seven starts as a Ram while Todd Gurley hit a sophomore slump. Albeit this was during the tenure of maligned Head Coach Jeff Fisher, which there is a general consensus could not get the best out of his young offensive weapons.

During this time both players faced the venom of the media with words like “bust” and “slump” being thrown around often. Jared looked rattled under pressure as his porous Offensive Line often let defenders through and Gurley was seen frustrated with coaches and players alike as in-fighting ensued.

During the regular season Jared has played with great confidence but after a down period following back to back losses to Chicago Bears and then Philadelphia Eagles it seems as if Goff had lost a bit of his faith in himself. In a two game stretch Jared threw 7 interceptions and only a single Touchdown. To restore that confidence the Ram’s coaching officials made Jared play through against the Arizona Cardinals and San Francisco 49ers in order to find his mojo.

As we know the Ram’s clinched the first round bye and in the Divisional Playoff Round they came up against the Dallas Cowboys. Whether it was by design or through fear of Goff having a repeat performance of multiple turnovers, Coach Sean McVay stuck to the ground game with the experience of C.J Anderson and the brilliance of Todd Gurley. The Running Back duo racking up a total of 238 yards on the ground and 3 Touchdowns. Goff got away with only having to throw the ball for 186 yards for zero Touchdowns but probably more importantly, zero interceptions.

Then came the biggest test of these two young player’s careers in the NFC Championship Game in the Mercedes-Benz Superdome in front of what Jared Goff described as “the loudest noise I’ve ever heard”. One player crumbled and the other player shone.

On the opening drive Todd Gurley tipped a pass intended for him which was then intercepted by the Saint’s waiting Defense. As the pressure grew behind a scoreboard deficit Gurley continued to wilt under the pressure and after another key drop on a third down was pulled for the majority of the game.

Enter front of stage, Quarterback Jared Goff, the California Kid. After making a total of 15 yards Offense in the first quarter, wearing his back-up Quarterback’s helmet due to microphone issues within his own helmet, and staring down a 13 point deficit in the biggest game of his career Jared Goff shone bright. Goff took control of the huddle, steered the team around the park and threw for 297 yards and a Touchdown.

Post-game, Jared Goff was applauded for his “Chill-factor” and clutch performance. Gurley however was left distraught in how close he had potentially come to being partly responsible for taking away an opportunity for his team to play in the Super Bowl.

Both players are key to the Ram’s success on Super Bowl Sunday. They are both young, talented and at times we have seen susceptible to different levels of pressure. Coming up against Tom Brady and a team that has by far the most big-game pressure experience in the NFL it will be upon both these young men’s shoulders to burden the load of the pressure in order to find success.

To overcome their inexperience they must trust in the players around them and trust that when they lead the rest will follow. I personally hope that both players can step up in their biggest test yet and lift a Lombardi Trophy together.