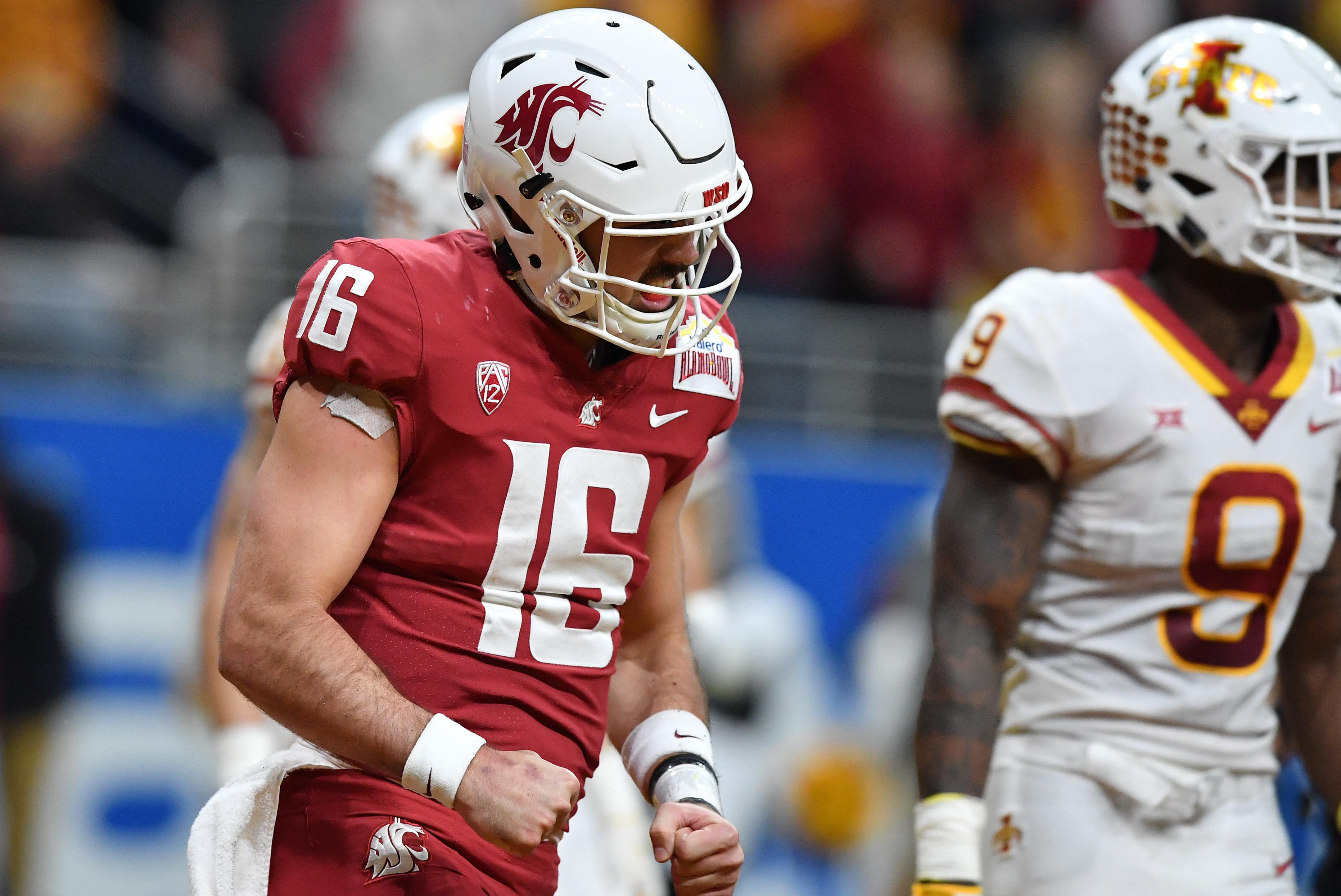 Today is the day, the Reeses Senior Bowl will start at 2:30 Alabama time and it will showcase some fun prospects. In this piece, you the Rams fan, will get an idea of who to watch for in this exciting All Star game.

Tyree Jackson is a player I just absolutely love in this class. When you talk about how mobile he is, the Josh Allen level arm talent he possesses (the same everyone fell in love with last year) and that freakish 6-7, 240-pound frame, you are looking at a perfect developmental project to draft in Jackson. Jared Goff is the likely franchise QB for the Rams but that doesn’t mean they can’t draft a guy, develop him and either trade him away, use as a backup or start him if Goff ever leaves the organization. That, is why the Rams and their fans absolutely have to be aware of drafting a QB in this year’s draft.

Jackson didn’t light it up at the practices but the reason his stock didn’t go up for me in the stock report article I released is simply because I saw everything I believed he had on film. People are going to be scared by the lack of accuracy but, I did notice even when Tyree made a fantastic play during the practices many overlooked it. Jackson now, can play in his own element, he’s going to be playing in game and will have the opportunity to showcase the mobility and arm talent he was limited to not really showcasing during the week. In practices, it’s a much more controlled environment and mobile QB’s are more so trying to prove they can throw with timing, accuracy and consistency while operating in a pocket. Today, is where it’s fair game, if Jackson needs to get out of the pocket and make a defense pay for playing man coverage with no help over the top, you can bet your bottom dollar Jackson is going to find him and hit him in stride. I describe Jackson’s potential as “limitless” if he joins a coaching staff that knows what they are doing he’s going to have a chance to develop into a strong QB, however, if he joins a team hoping to start him as soon as possible and not give him the time he’s going to struggle.

Look for Jackson to have a stellar day throwing the ball and end up as the Senior Bowl Most Outstanding Player for the South team.

Minshew is another player that displays that pocket mobility. It’s a big attribute he has and his ability like, Jackson, to throw off base and deliver a pass with accuracy and placement. Minshew was nowhere near criticized as much as Tyree Jackson but that doesn’t mean he wasn’t criticized. Minshew was by many, a disappointment, people were upset he came in at six feet tall and not 6-2 as listed on his school profile. However, I like Minshew, I spoke with him like Tyree and came away impressed. He seemed to be extremely open to playing under Sean McVay and he explained that he had met with the Rams twice. To me, this is another candidate to win a Most Outstanding Player award. We see it last year with small, compact and mobile Kyle Lauletta and I have a feeling we could see it with Minshew.

It’s a lot harder for these QB’s to go out there in practice and throw on the money every time against all-stars and throw to receivers they have no chemistry with. By game time, that normally is figured out and we get a chance to see some serious chemistry build. Minshew should have that going for him in this one.

Many were crucifying Trace this week in Mobile but I think once again, the practices limited what he does best. This game, McSorley will have the opportunity to get out on the run if need be and make something happen with his legs or throw out of the pocket. He does a really good job improvising and unfortunately once again, in a controlled practice environment, you don’t really get to see his qualities. He may never be a starter in the NFL but he’s a player that could stick around a long time. I think McSorley to the Rams would make sense and when you talk about Sean McVay and his willingness to copy and paste into his offense, you could very well see McSorley copied and pasted into the Rams offense as a Taysom Hill level player.

This is the dark horse in my mind to win an award following this game, no one is expecting much and he could just come out and find himself having a real good day. His footwork got better throughout the week and like many of these guys, taking snaps under center was something that McSorley simply did not do in college. We will see what the Penn State QB can do in today’s All Star game.

Perhaps the best overall offensive lineman in this game is Elgton Jenkins. He is quite possibly the best center in the class. When the Rams offensive line started reaching new heights this season, there was always one thing that screamed out to me. The Rams offensive line is this good and yet, their biggest weak link is at the center position. The Rams drafted Brian Allen last year but when you look at Jenkins you are talking about a completely different tier of player. Can Allen succeed? Yes, but Jenkins has Pro Bowl level talent. He’s technically sound, he does everything right, he’s not going to be the best center in the league, he’s not going to be overwhelmingly imposing but he’s going to come to work every day and he’s going to win his matchup for 60 minutes. Jenkins is a player to watch today because he legitimately could make the Rams offensive line better right now if you plugged him in over Sullivan.

He’s an extremely smart player that plays very clean, he’s fluid and has no issue getting to second-level. When you talk about John Sullivan of the Rams, you see why they start him, obviously it’s because of the football IQ. Sullivan will have a year left on his contract and Jenkins could legitimately replace him as a better option in every area of his game. Watch out for him today as he takes on some of the most impressive defensive line Senior Bowl players I’ve seen in awhile.

Powers dominated Senior Bowl week no matter who the competition was. It remains up in the air if the Rams will sign Rodger Saffold after the season or not but regardless if they do or not, Ben Powers of Oklahoma is a player they could really bolster their offensive line’s depth with and have the high upside to go ahead and end up starting him down the road. The Rams will also have to extend Austin Blythe, that’s never a guarantee and he ends up leaving now you end up having Powers that you can throw right in there.

Look for Powers in the run game and in pass protection to show out today.

This is the opportunity of a lifetime for Khalen. As mentioned earlier in the week, Khalen Saunders had his first kid and refused to leave the Senior Bowl. He knows how big this day is and he’s going to make the most of it. He’s such a quick and ultimately athletic player that is going to have himself a day here in Mobile. The Rams have the uncertain future of impending free agent Ndamukong Suh and a potential cap casualty in Michael Brockers. From what I’ve seen here Saunders could start next to Aaron Donald as soon as the season started as a rookie. The Rams drafted John Franklin-Myers last year and they like him a lot so they could draft another defensive lineman and call it a day.

Saunders first step is one to watch in the interior today. He could be in for a monster day and he could hear his name called a lot.

Hanks has a chance to blow up his draft stock as we move closer to the draft. When you watch the film and just watch him this week, you see a linebacker that is super in shame, can get off blocks, finishes tackles, has a nose for the ball, can dip into coverage with ease and just has some fantastic amount of range. Hanks is going to flash his potential today in a big game and Rams fans should be watching. The Rams have Mark Barron who is likely out after this year and they drafted Micah Kiser last year but they need to get more athletic at the position but bigger in a sense so they can be able to get off of their blocks. Cory Littleton is getting better every year so if you want to add a stout run defender that has the versatility to do it all, better look at Hanks.

In this game Hanks can show off his ability as a pass rusher as well that only adds to the value he possesses. He’s definitely a player to watch out for as the draft process rolls along. He’s listed at outside linebacker but I feel as though he projected to an inside backer in Wade’s scheme very well.

Fields is a player I knew hardly anything of coming into this week but he’s really made a statement. Obviously, when you talk about a Clemson roster that is as talented as they are you realize why Fields’ playing time was limited. The Clemson CB was named the best cover corner at the Senior Bowl by many according to Jim Nagy. Fields will have the opportunity to help out a team long-term. I feel like he projects well to the NFL game and the Rams, who have been given a curve ball with Marcus Peters’ struggles, Aqib Talib is aging, Troy Hill and Sam Shields will be free agents, why not grab a guy like Fields on your roster.

If you are watching today, be sure to keep an eye on #26 of the South team, I wouldn’t be surprised if he made a couple big-time plays and looked as smooth as he did this week.

Will Harris was a great interview for me, it’s become exciting for the Boston College fans and their players as they continue to pump out NFL talent. Harris when asked told me he would love the opportunity to play with former BC safety John Johnson III. Shortly after that I caught the Rams meeting with Harris after practice. He’s on their radar, he’s got great size for the position and he moved extremely well and quite honestly blew my expectations out of the water. Harris is a player to watch for in this game, he could make a big hit or a huge interception but either way his consistency this week won’t come to a complete stop.

Watch out for this player, he’s done a lot in a short amount of time and while everyone knows his teammate Lukas Denis, Harris this week made me go back to the film and find that he is in fact the better safety in Boston College and he’s the one that everyone should be watching out for.