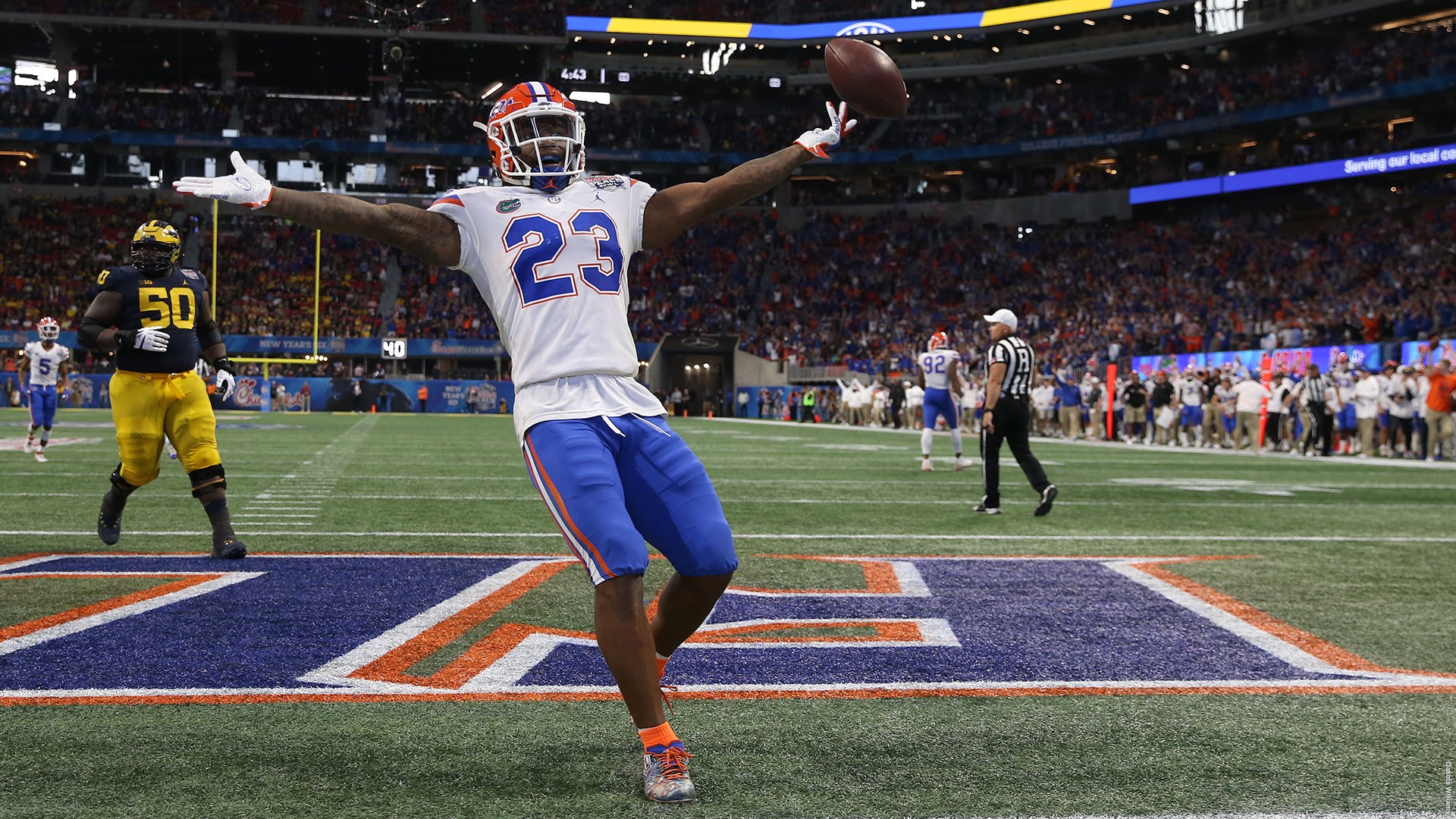 The Rams are preparing for their fourth franchise Super Bowl appearance but the NFL Draft follows that. Here’s a list of players the Rams can replace their free agents with in the draft should they not be in the plans after this year. 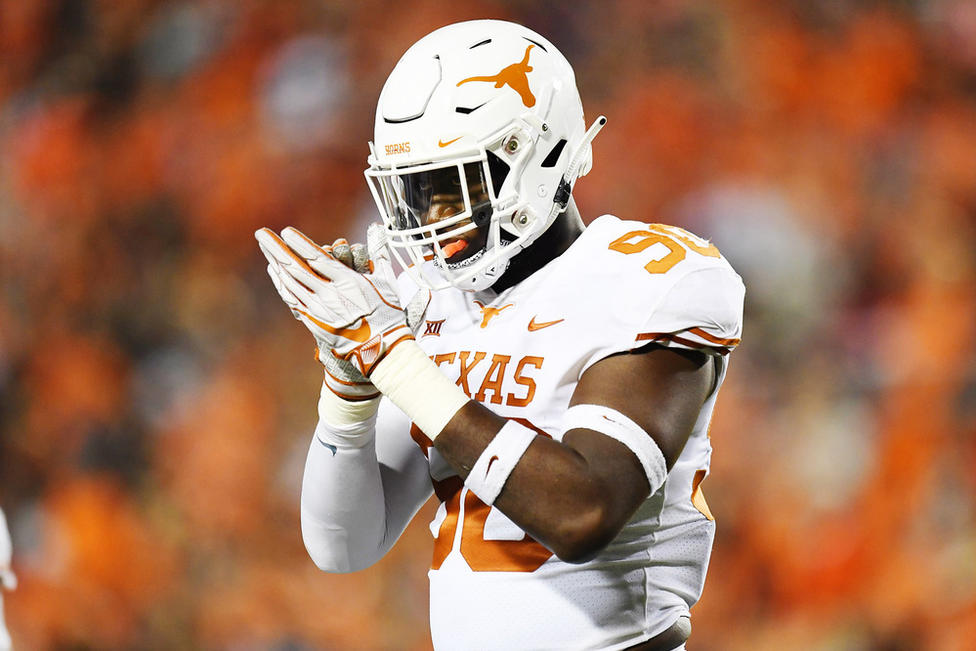 Ndamukong Suh has been huge for the Los Angeles Rams in the playoffs and unfortunately his recent play regardless of the Super Bowl outcome could lead to him requiring just as much money as he was paid this year. Because of Suh’s ability the replacement from the draft has to at least come close to matching the value that Suh provides, so in this case it’s Texas DL Charles Omenihu. Omenihu has been turning heads here at the Senior Bowl early on and appears to be a likely candidate to fly up draft boards around combine time.

Omenihu is very explosive with his initial first step, uses his hands well, he’s powerful at the point of attack and his length allows him to succeed as a tackler. He has room for improvement and at 275 pounds he’s a little light but next to Aaron Donald, Omenihu could be lethal. He has 14 sack potential and then some and would be a great addition as someone that can rush the passer and play the run in a three-technique.

How to make this happen: Draft him 32nd – At this point in time that may be considered a reach but if you want Omenihu you may have to reach without a second rounder in your arsenal. 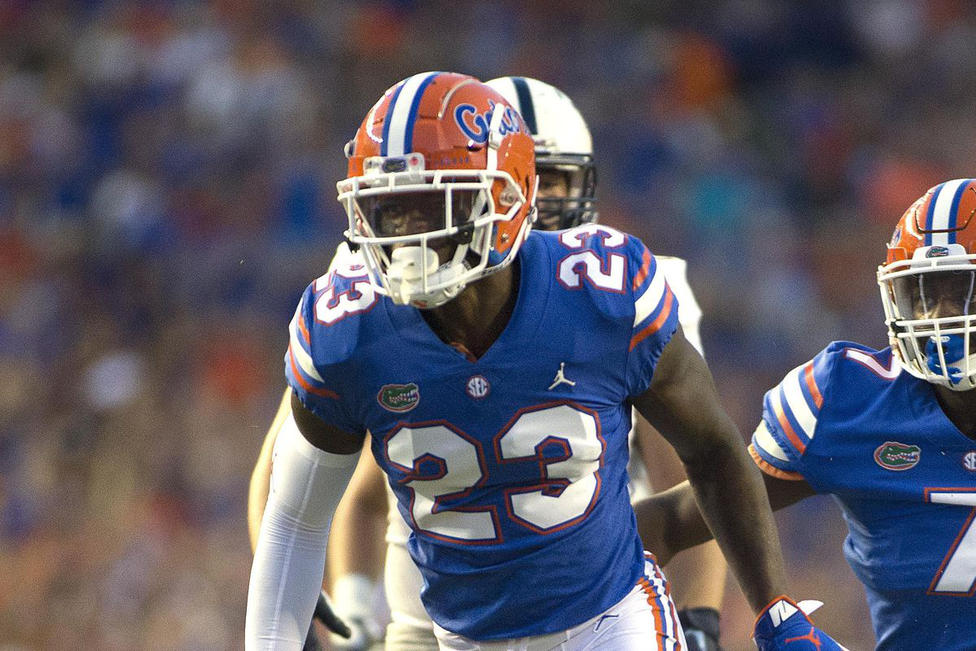 LaMarcus Joyner is coming off a hefty price tag after the Rams gave him the franchise tag. Could he return on a cheaper deal after a down season? Yes, but the question is this. Is Joyner the right fit for the Rams defense? That looked to be the case in year one but this year has everyone thinking otherwise.

That’s where Chauncey Gardner-Johnson comes in. The Florida Gator has great range and has shown growth over the last season in college. The versatility is there, just like it was with Joyner, in the ability to play both corner and safety. Gardner-Johnson needs to establish consistency but with his versatility, range, speed, quickness and ball skills he would be able to slide right in there and replace Joyner next season next to John Johnson III.

How to make this happen: Take him 32nd – It’s kind of a reach, you could trade down 5-10 picks and get him but this guarantees you end up with CGJ. Why no Nasir Adderley? His stock is buzzing and so I expect him to go before the end of the first round. 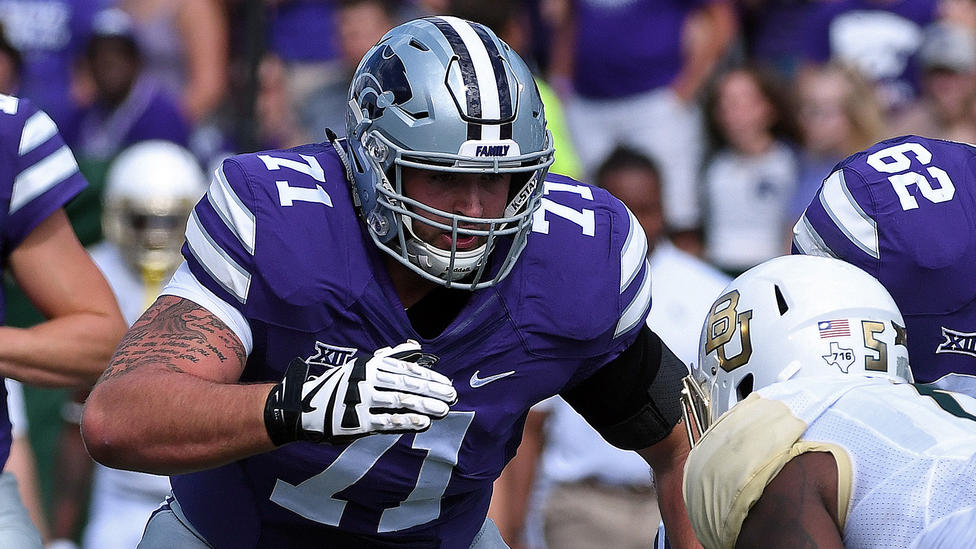 The Rams absolutely need to bring back G Rodger Saffold. I would imagine he’s a candidate to take a hometown discount in free agency and it will be up to the Rams to keep the 2010 second-rounder in town. However, if the Rams left him go, they could have multiple replacements via the draft.

Dalton Risner is a mean man with consistency in stifling power rushers, great technique, solid athleticism to get to the second-level and of course a mean-streak. Risner prefers to play right tackle at the next level but has said he will play any position the team needs him to play. Risner has Pro Bowl-level talent and the ability to finish his assignments with authority.

How to make this happen: Take him 32nd if he’s there. There’s a chance Risner shoots up into the 1st round. 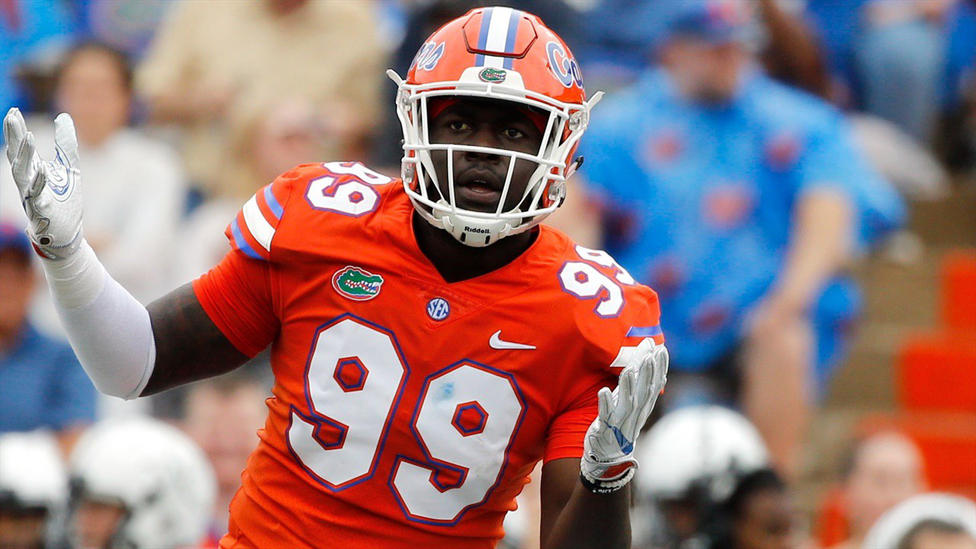 Just like Rodger Saffold, I would prefer the Rams bring back Dante Fowler Jr. on a new long-term deal. The 25-year old speed rusher brings a lot to the table. Without him, the Rams likely wouldn’t be playing Super Bowl Sunday. However, his price tag could end up being too high.

In that case, if the Rams are looking for a player to replace him they may have to go for THE guy and that’s fellow Florida alumni Jachai Polite. Polite is going before the end of the first without a doubt so the Rams will likely have to trade up for him but he’s worth it. Polite has great technique, he’s one of the fastest rushers in this draft, explosive and he’s a consistent tackler. Polite’s ceiling is extremely high and he could end up as one of the best sack artists in the league.

How to make this happen: Trade up and grab Jachai Polite in the middle of the 1st round. 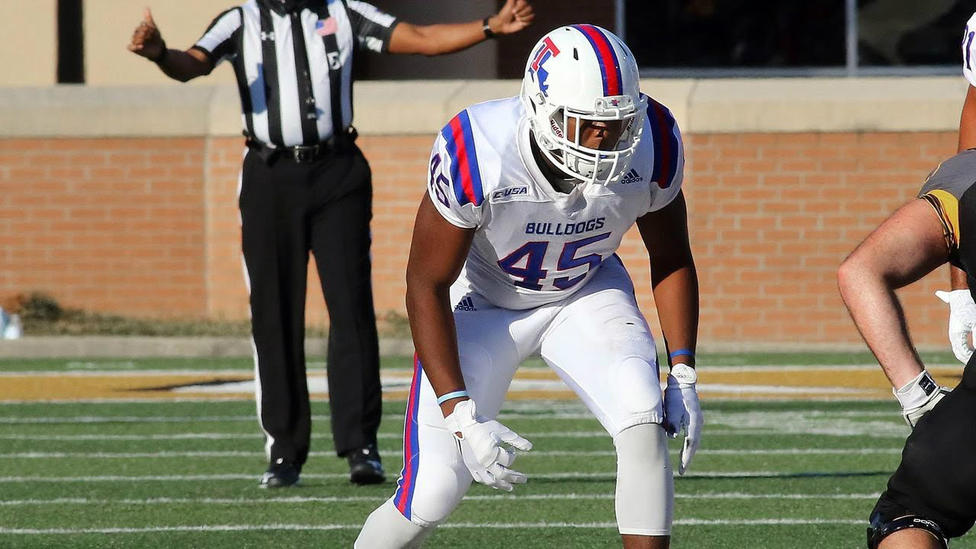 Dominique Easley has been hampered by injury and now with his contract expiring it’s a question whether or not the Rams will keep him. Easley, a former defensive tackle moved to defensive end and then moved to outside linebacker, was the Rams highest graded edge defender when he went down with the injury earlier in the year according to PFF.

The Rams can replace Easley with the all-time FBS leader in sacks. Jaylon Ferguson wins with power, he’s similar to Easley in which he wins with power and technique. Easley is quick, so is Ferguson. Where will Ferguson go? That’s a legitimate question. He could go early in the draft or he could fall to round three. He has one of the higher ceilings in this draft and with the size he possesses he’s going to help a team as a pass rusher and run stopper.

How to make this happen: Spend one of your 3rd round picks (projected to have two left) on Ferguson. 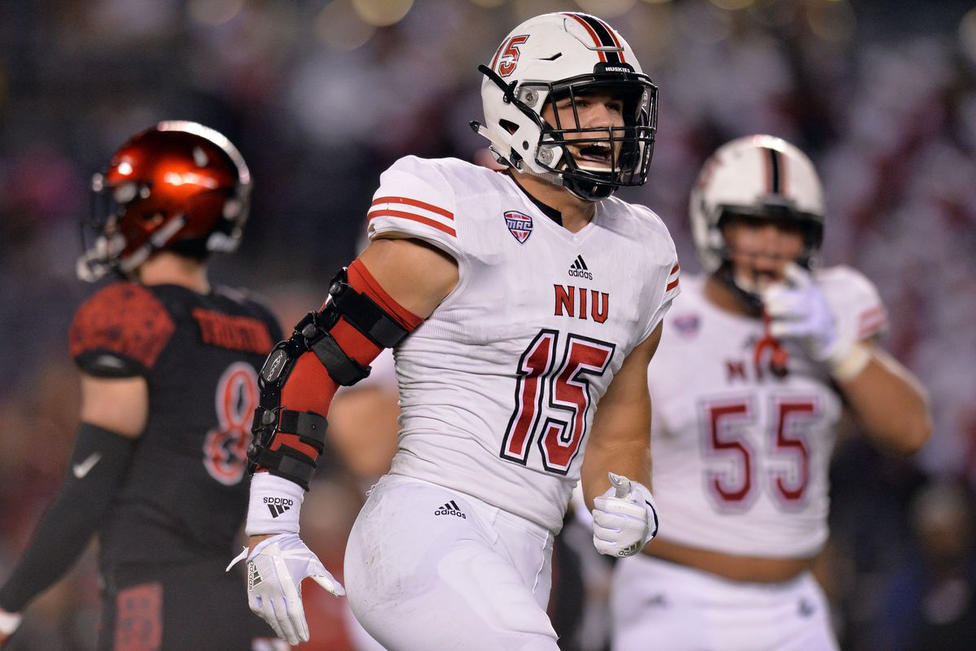 Matt Longacre has always been a rotational contributor for the Rams in their pass rushing rotation but with the additions of Trevon Young, Ogbonnia Okoronkwo, Justin Lawler and Samson Ebukam via the draft over the last two years and the possibility of Fowler coming back on a new deal, Longacre’s time on the Rams could be coming to an end.

Sutton Smith is an intriguing prospect out of Northern Illinois that could replace Longacre if they so choose. Smith has starter upside with rotational player/special teamer ability. He has NFL athleticism and adequate size to replace Longacre.

How to make this happen: Select him on day three of the draft. 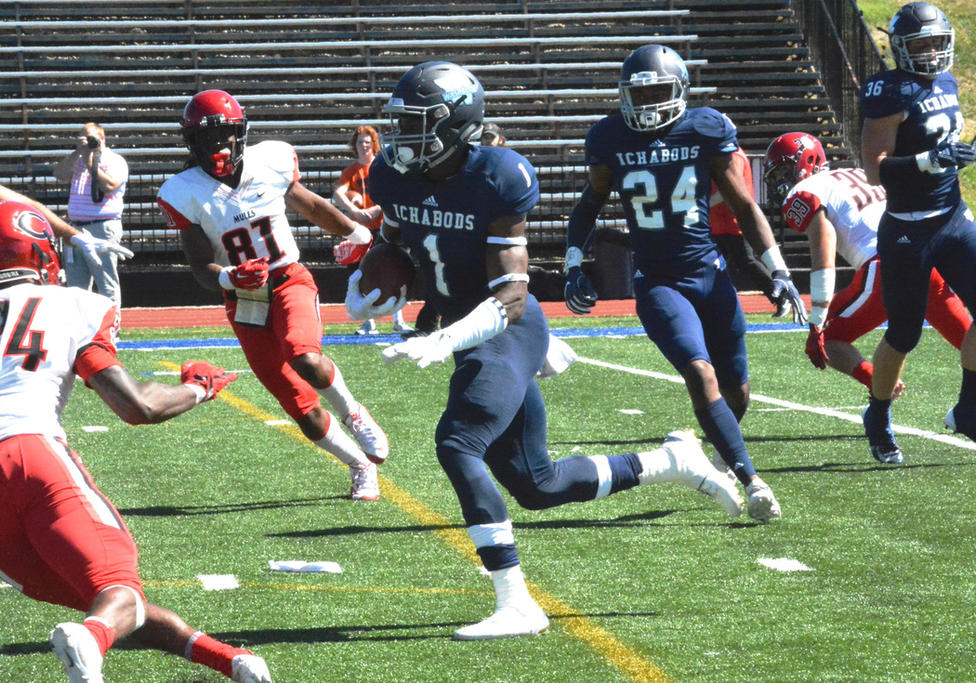 Sam Shields is a speedy cornerback that has become more of a special teams ace than key corner contributor since joining the Rams. Will he be back next year? That remains to be seen, however, the Rams can find his replacement and Aqib Talib’s long-term replacement in this draft.

Corey Ballentine showed out in the first day of the Senior Bowl practices. A division two prospect out of Washburn, looked like he belonged. He showed off great speed, quick twitch and the ability to flip his hips with ease. He had some huge reps and I took notice. It’s unclear where a guy like this would go in the draft but I could see day three and a perfect developmental corner to replace Sam Shields.

How to makes this happen: Grab him on day three of the draft.