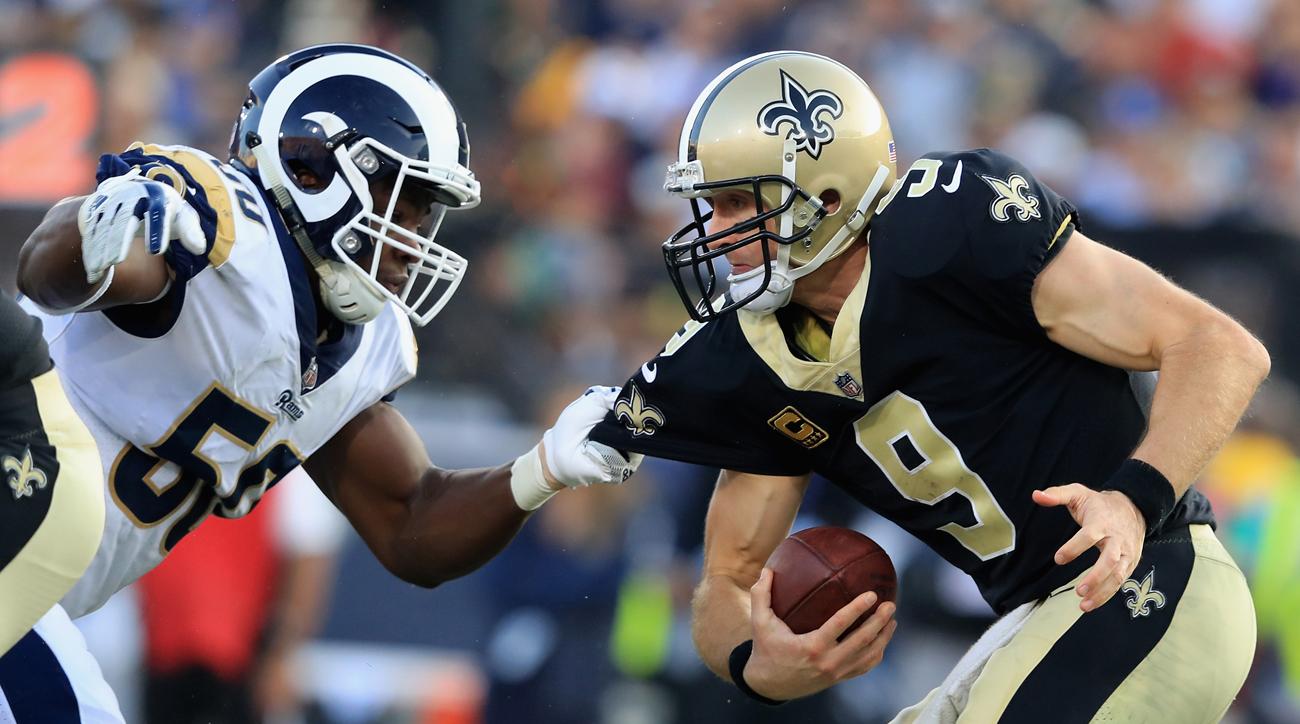 WITH REVENGE ON THEIR MIND, THE LA RAMS HEAD TO NEW ORLEANS FOR A TRIP TO THE SUPER BOWL.

Preview: The Rams take on the Saints in what should be an amazing matchup. The Saints haven’t lost a home playoff game in 26 years (@NoPlanB_). The Rams haven’t played in an NFC championship game in what feels like 26 years. The vet vs the kid. The best OL in the league vs a banged up DL. Peters revenge game. Talib is back. Donald vs Peat. These are just a few of the match ups I will dig deeper on.

Lets dig deep into the matchup and the numbers. The graphic below breaks down just about everything we need to know when predicting the outcome of this game. All stats and definitions (DVOA) can be found on footballoutsiders.com.

Rams O vs Saints D – This is a very tough part of the game to predict and my reason why is pretty simple, Sheldon Rankins. The Saints DT has been excellent this year and anchors a Saints rush D that ranks 3rd via DVOA. I think his loss drops this ranking down quite a bit, and could be comparable to what we saw last week vs Dallas. Rankins’ replacement will need to step up big for the Saints to help contain the Rams two-headed attack…. That still sounds weird to say. RBs Todd Gurley and CJ Anderson have been spectacular since Anderson’s addition late in the year. The Saints can be exploited in the secondary (think Goff vs NO earlier this year) ranking 22nd in pass d (DVOA).The battle in the trenches is going to be a big matchup to watch. Saints rank top 5 in both run stuffing and pass rushing via DVOA. If Goff and Coach McVay can block the crowd noise out I believe our offense matches up very well with the Saints defense. Cameron Jordan cannot make a big play to lose us this game. Make him a priority in our blocking schemes as he is the 7th ranked DE via PFF. The last thing I would like to note is that Saints red zone D is very suspect ranking 25th in the NFL.

Saints O vs Rams D – I posted a graphic on twitter about what I believe to be the most important mismatch the Rams need to take advantage of. The graphic showed Aaron Donald and Ndamukong Suh lined up across from Saints OG Andrus Peat. Peat is the 79th ranked offensive guard via pff. This matchup right here is how we get pressure on Brees hoping he makes a mistake, and how we stuff the run. Donald and Suh should win their match-ups, now we need Michael Brockers, Mark Barron, and Cory Littleton to step up and win their match up. Drew Brees to Michael Thomas may be the best duo in the NFL. Aqib Talib was out the last time these two teams met, so one would assume Thomas won’t have quite as much success as that matchup. I am a big believer that Suh and the boys on defense are giving so much more effort in the playoffs. Suh came to win a Super Bowl, the regular season appeared to be meaningless for him. What that being said I also have to trust the numbers, and the numbers tell me that Brees and the Saints offense should have some success against our defense. We need Donald, Folwer, Peters, or Talib (or anyone you get the picture) to make a big play for us. On the road, winning the turnover battle is massive, and the Rams will win this game if they win the turnover battle. Not tie, but win.

SUMMARY – I don’t think there is any doubt this game is going to be incredible. It sounds like a lame summary, but this game is a coin flip. My projections actually have the Rams as the better team (if this game was on a natural site I’d have the Rams by 3), but I give the Saints 4 points for being at home and thats how I got the number below.

Bets: Rams moneyline (yes, i know I have the Saints winning, but there is value in the Rams ML. Bet on value, not outcome)