The Rams were off for a week and now they are back in the coliseum to host the Dallas Cowboys.

Preview: Finally, we are done with the boring defense stuff. This entire round of games should be very entertaining, with a lot of scoring. The Cowboys/Rams matchup has a chance to be the lowest scoring matchup on this weekends slate of games. The Rams high powered offense vs the Cowboys young/fast defense. Ezekiel Elliott vs the Rams run defense. Dak Prescott vs Jared Goff. Aaron Donald vs Cowboys OL. Talib/Peters vs Amari Cooper. Todd Gurley vs Landon Vander Esch/ Jaylon Smith. These are the match ups to keep an eye on. Lets dig deep into the matchup and the numbers. The graphic below breaks down just about everything we need to know when predicting the outcome of this game. All stats and definitions (DVOA) can be found on footballoutsiders.com.

Cowboys O vs Rams D – The Cowboys lean heavily on Zeke Elliot. Zeke should get 20+ carries, and be used as a pass catcher out of the back field. Dak will look to make plays with legs, and will have some designed run plays for him. The Rams struggle vs the run, which is not a good feat to have against one of the elite backs in the NFL. The key for the Cowboys O is to exploit the weak Rams D then hit the Rams deep with play action to Amari Cooper, the outstanding WR acquired via trade during the regular season. The problem with this is Dak doesn’t take shots deep as only 6% of his passes are deep balls. It is very important that the Rams do not get lazy and hand the Cowboys an easy touchdown deep. The key for the Rams D is to get pressure on Dak. This is where Dak seems to struggle. As you can see in the graphic below, the Cowboys pass blocking is ranked 28th via footballoutsiders. This should set Aaron Donald up nicely to take over this game, especially at the end of halves and passing situations. Zeke is going to have a good day. Don’t worry about stopping Zeke, contain Zeke. A key stat related to this: when Zeke runs for 100+ yards the Cowboys are 17-4. Not the biggest sample size, but 21 games is a decent chunk in the NFL. The Cowboys have a very good shot at winning this game if Zeke goes for 100+ yards. Please also note how bad the Cowboys red zone offense is (29th). Holding opponents to field goals is huge for this team, given the amount of points we put up. If the Rams force Dak to beat them, and give Zeke his 4 yards per carry on 20 carries, the Rams should come away on top in this one.

Rams O vs Cowboys D – I think the Rams beat the Cowboys if Goff plays well. He doesn’t have to play great, but cannot afford to play bad. The health of Gurley is something to watch closely. If he doesn’t look right I hope McVay goes to CJ Anderson. I expect Everett, Wood, or Reynolds to have a big day. The Cowboys are very good at stopping the run, so Gurley should be contained. Dallas can be exploited in the passing game with an average secondary, and weak pass rush. Do not let Demarcus Lawrence beat you. Goff should have time to throw and I believe we have a much better WR core than their secondary can handle. Byron Jones is an absolute stud (10th ranked pff corner), but Anthony Brown and Chidobe Awuzie are ranked average at best. And as we all know, the Rams WR core is arguably the best in the NFL.

Cowboys Special Teams vs Rams Special Teams – Everything matters come playoff time. Remember how bad our special teams was last year? Lets hope we are ready to play on all 3 phases of the game. The Rams have a pretty decent advantage when it comes to special teams. Johnny Hekker and Greg Zuerlein are among the best at their respected positions. Brett Maher, the Cowboys kicker, has had a pretty good year. He has a very strong long with a 62 harder this year. Our kicking, punt, and punt return game are much better than the Cowboys via footballoutsiders. Our kick off unit shouldn’t matter much as Greg the Leg has the 6th best touchback percentage in the NFL. 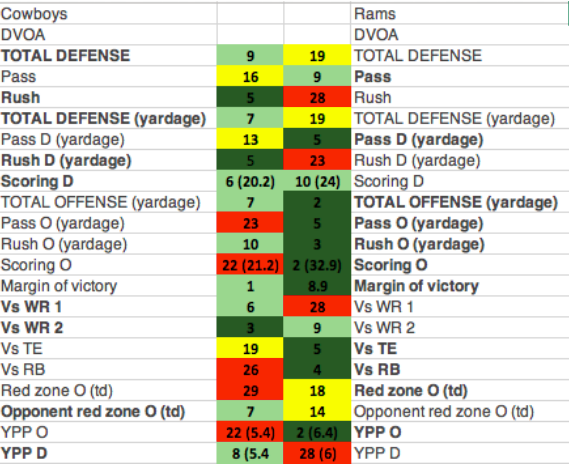 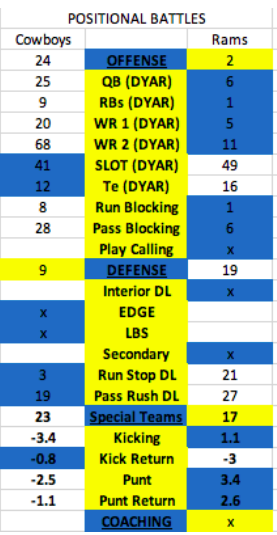 SUMMARY – I think if Zeke doesn’t reach 100 yards rushing the Rams win this game. If Zeke reaches 100 yards, the Cowboys will be in it to the end. I think we have a matchup advantage with Goff and the WRs. One of the more underrated aspects of football is the coaching matchup. I think we can all agree McVay blows Garrett out in terms of coaching rank. This should be big in exploiting mis-matches and taking away opposing game plans.