The Rams crosstown rivals head to Baltimore to play a team that already embarrassed them in Los Angeles. The Ravens are coming off a 6-1 end to their regular season, will they extend their playoff hopes with the youngest starting QB in playoff history? 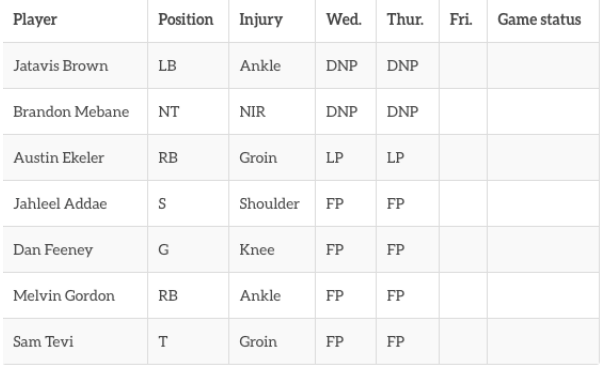 Preview: Lamar Jackson leads an offense that is different from every offense we have ever seen. Lamar broke the rushing attempts by a QB record… And didn’t start until week 11! Phil Rivers is just missing a Super Bowl ring to lock himself in the Hall of Fame, but he can he finally get over the hump against one of the best defenses in the NFL? (ranked 3rd total, 3rd pass, 6th run)

Chargers Offense vs Ravens Defense – This Ravens defense might even be better than advertised. Outside of the 3rd ranked defense (DVOA) they have two flaws: red zone defense and covering the tight end. If Hunter Henry is somehow able to play, the Chargers have a real shot at attacking the Ravens defense with the TE position, something I do not think Antonio Gates can do at this point in his career. MGIII is back and is going to need to be at his best to get anything going on the ground against this Ravens front. Rivers needs to take what the defense gives him, not turn the ball over, and control his composure if he wants to go on the road — against this defense and win.

Ravens Offense vs Chargers Defense – The #1 power run offense vs the #23 power run defense. Expect Lamar to get 15-20 carries, and the Ravens running backs to get near the same. The Ravens will look to run early and often to control the clock and keep their defense rested on the sidelines. The Chargers have been pretty good against the run as a whole this year (10th DVOA), so look for Lamar to have to make a few plays down field with his arm. 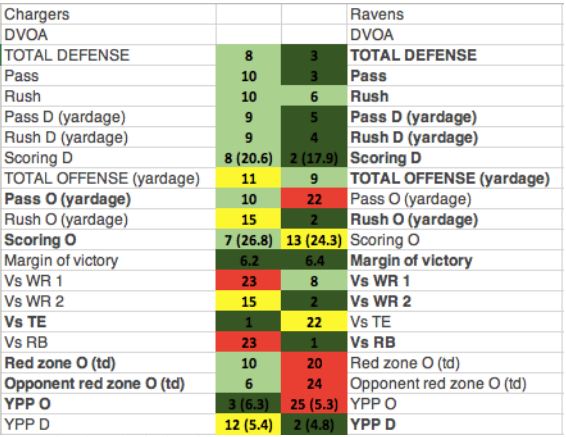 SUMMARY – If the Chargers want any chance in winning this game Phill cannot turn the ball over, and the Chargers run d must show up and not run out of gas as the game goes along. I see Lamar making some plays with his arm to the likes of Crabtree. At the end of the day I don’t trust Phill to win a big game, especially on the road against one of the best defenses in the NFL. This Ravens running game gets going and holds off a late