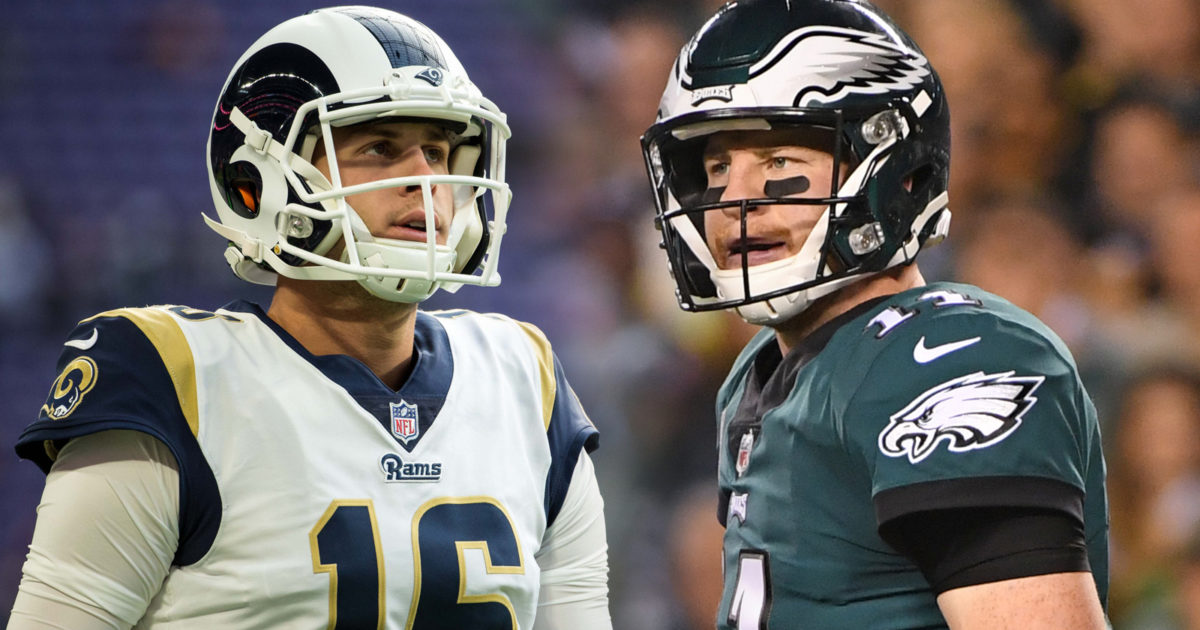 UPDATE: Reports are that Carson Wentz is not likely to play Sunday and possibly the rest of the season. Nick Foles will take over starting quarterback duties if reports are true.

After a dismal showing against the vaunted Chicago Bears defense the Los Angeles Rams look to get back on track and finish the season strong. That all starts with Sunday’s matchup against the Philadelphia Eagles. With the Rams coming off a 15-6 loss at Chicago and the Eagles coming off a 29-23 loss to the Cowboys, both these teams will be fired up to earn a win on Sunday Night Football. The Rams are sitting pretty, despite what many fans and media members have been saying, at 11-2 the Rams are already NFC West Champs and are locked into a playoff spot. The Eagles are a little different, sitting at 6-7, they are second in the NFC East but still remain in the playoff hunt. The Rams would be wise to understand that this Eagles team despite the Super Bowl “hangover” are coming into the Coliseum to smack them in the mouth Philly style.

Let’s look at the history between these two teams before discussing present day matchups. These teams have played each other a total of 41 times with the Eagles leading the series at 21-19-1. To go along with that-the Eagles have won the last three meetings between these two teams. In 2011 the then St. Louis Rams lost 31-13 and again in 2014 they lost 34-28. Most recently, in the first game between the two since the Rams returned to Los Angeles, the Rams fell to the Carson Wentz led Eagles 43-35. It is also important to note that this is the game that ended the MVP season Carson Wentz was having via an ACL tear. The rest is history as the Eagles rode the Nick Foles wave to a Super Bowl victory. You have to go all the way back to December 27, 2004 to see the Rams victorious over the Eagles. The Rams won with a score of 20-7. Hopefully, on Sunday the Los Angeles Rams can rebound after a tough loss and get the all-time win total between these NFC teams a little closer to .500 and get the Rams back on a hot streak before the end of the season and subsequently, the playoffs.

Goff versus Wentz, number one overall versus number two overall, this will likely be a rivalry for the next decade. Both quarterbacks deserve all the hype they get, both talented guys who have had a lot of success at a young age with their respective teams. The debate will rage on for years about who is better, more successful, which guys trophy case has more hardware. But rest assured both of these guys are zeroed in on this Sunday and nowhere else. The Eagles came away with the win last year, but this year is different. The Los Angeles Rams are a better team this year than last, they are the better team period. But the Rams, coming off an embarrassing loss, are going to approach this game exactly as they should-with the mindset that they are facing the defending Super Bowl Champion Philadelphia Eagles. The Rams should come out laser focused on Sunday night and the offense should be rolling on all cylinders. You know they are itching to get back at it and erase that Bears game from memory and get back to 30+ PPG. This is likely the last true test Jared Goff and the Rams will have until playoff time. With games against the Cardinals and 49ers coming up, this is the last time this team will face an opponent that is in playoff contention. The Rams are looking to come out of this 12-2 and beginning their run into the playoffs. Let’s not forget that if the Rams can handle their business these last three games and with a little bit of luck and another Saints loss the Rams could still end up with home field advantage. I expect them to play like they still have something to fight for just like the Eagles.

My original score prediction for this game was 38-14. I’ve changed that a little bit. The Eagles aren’t going to just lay down but I also believe the Rams have some anger they need to release and the Eagles happen to be in the wrong place at the wrong time. While the Rams have missed Cooper Kupp, the Eagles have had an injury problem this season. Major losses for the Eagles this year include; Jay Ajayi, Derek Barnett, Ronald Darby, Rodney McLeod, and Jalen Mills. Their secondary has really taken a hit this year, and it shows with the 30th ranked pass defense and the 25th ranked in total yards. The bright spot for the Eagles being their 13th ranked defense in points allowed. The Rams though, are 3rd in PPG and yards on offense along with 5th in passing and rushing yards. Meanwhile the Rams are ranked 18th in points allowed. What I’m getting at here is that the Rams have struggled in redzone scoring and the Eagles give up the yards but not always the score. It is also important to add though that the Eagles have only gone over 30 points once this entire season against the Giants. It will be interesting to see how this game plays out, but how the Rams perform in the redzone could make or break them when the clock hits zero. Now, under Sean McVay, the Rams in two seasons have never lost back to back games, something about his coaching and the players buying in just tells me that when things get bad-this team gets tougher. They do a really good job of leaving their losses behind them and going all in on their next challenge. Also, the Rams are currently undefeated at home in the Coliseum this year with the only two losses coming against playoff teams in away games. Meanwhile, the Eagles are 2-4 in away games this year. The Coli should be rocking with blue and yellow on Sunday night and that should energize this Rams team as they fight for the number one seed in the NFC. My final prediction on this game is 45-24.

Aaron Donald: Still looking to break the single season DT sack total of 18. Aaron Donald is two away from that goal. This Rams defense depends on him to get to Carson Wentz early and often.

Zach Ertz: The Rams have not been good against tight ends generally speaking, enter Ertz and his stat line of 98 receptions, 1016 yards, and 6 touchdowns. The Eagles will look to exploit the Rams defense in the middle. The Rams will have a tough task trying to limit Ertz’ production on Sunday, maybe the Rams use Marcus Peters on him a little bit like they did with Travis Kelce and the Chiefs?

Rams O-line: This unit has struggled lately and was absolutely bullied by the Chicago Bears. Led by Walter Payton Man of the Year candidate, Andrew Whitworth, this unit is looking to rebound. They need to be aggressive in the run game and get Todd Gurley going early so that later they can give Jared Goff time in the pocket on play-action to take advantage of a depleted Eagles secondary.

Eagles D-line: Missing Derek Barnett hurts, but this unit still deploys Michael Bennet and Fletcher Cox (NOT Aaron Donald). The two have accumulated 14.5 sacks in 2018 and will be looking to exploit a Ram’s O-line that hasn’t been up to par the last couple weeks. If they can limit Todd Gurley early and Sean McVay abandons the running game-this unit will look to pin their ears back and feast on Jared Goff.

I think Sean McVay knows he needs to run the ball and work the play-action game. I think he knows he has ignored Todd Gurley at times and that it is detrimental to the offense. I think the O-line is placing a lot of blame on themselves as well and are going to come out early and look to dominate the point of attack. The sky is not falling Rams fans. We still have a good coach, good QB, and good offense. Every team has bad days-that is why nobody has had the perfect season since the ’72 Dolphins. This team is still playoff bound and if they can right this ship on Sunday, I see no reason they can’t be Super Bowl bound. Now please, go see a therapist about your Jeff Fisher PTSD and enjoy the Coli rocking on a Sunday night to the tune of a Rams win.