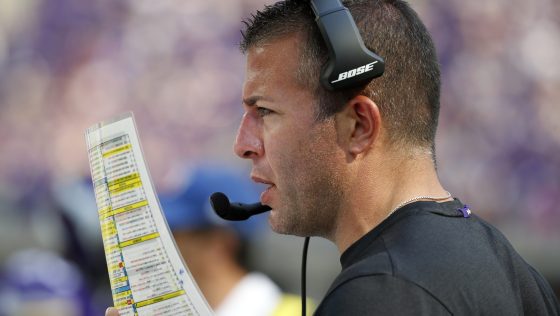 After falling to 6-6-1 and coming off an embarrassing offensive performance on Monday Night Football, the Vikings have fired Offensive coordinator John DeFilippo. The move is somewhat shocking seeing as DeFilippo is one of the coveted offensive minds in football. It seems less about a firing of poor production and more about finding a scapegoat for a bigger problem. He likely won’t last long on the open market but this is exactly why the 11-2 Rams will have to consider bringing him on.

The Los Angeles Rams, and mainly Coach Sean McVay had an up-and-coming Offensive mind by the name of Matt LaFleur. McVay also had veteran coach Greg Olson as his QB’s coach. Both of which went to other teams to assume larger roles with Olson calling the plays in Oakland and LaFleur having more freedom with the offensive play-calling in Tennessee. Due to these moves the Rams promoted OL coach Aaron Kromer to the Running Game Coordinator role and TE’s coach Shane Waldron to the Passing Game Coordinator role. That left the role of QB coach wide open for Zac Taylor to come over from the Miami Dolphins and assume the position.

Taylor, is just three years older than McVay and is receiving serious buzz about a Head coaching job next season. It’s crazy to see a QB’s coach end up as one of the front-runners for such a big job but McVay’s coaching tree is starting to develop and make waves around the NFL. With that being said, success is great but it can rip away the foundation of your coaching staff and to be completely honest, the Rams are likely going to be plucked over the next half decade with eligible candidates including but not limited to aforementioned Shane Waldron, Zac Taylor, Assistant coach Jedd Fisch and Defensive backs coach Aubrey Pleasant.

This is exactly why John DeFilippo, the recently fired Offensive coordinator makes a ton of sense. The QB whisperer himself is going to need to take a step back and likely take on a reduced role. Coaching is mainly a stock game in today’s league and with a firing from the OC position, DeFilippo will likely need to assume control of a QB coach role like he’s had over his career. Maybe coach “Flip” could assume a role as an offensive analyst to get himself into the building and wait until Taylor or another coach flees for a bigger role elsewhere. It’s worth noting McVay tried to acquire the services of friend and former Texas Tech Head coach Kliff Kingsbury. Kingsbury is a heavily coveted offensive mind just like DeFilippo has been over his career. If McVay was looking to add Kingsbury onto the coaching staff for the remainder of the season, one would think McVay would consider doing so with DeFilippo.

The argument is straight-forward. You add DeFilippo on before the season ends and get him into the building and you go from there. Maybe he leaves in the off-season and goes elsewhere but there aren’t many better situations for DeFilippo at this moment or any offensive mind than a less-than-4 month temp position with one of the best teams in football. That’s all without considering the possible openings after the year with the names previously mentioned. Kingsbury went to USC but there’s no reason the Rams can’t nab DeFilippo and there is no reason that they shouldn’t pursue coach “Flip”.