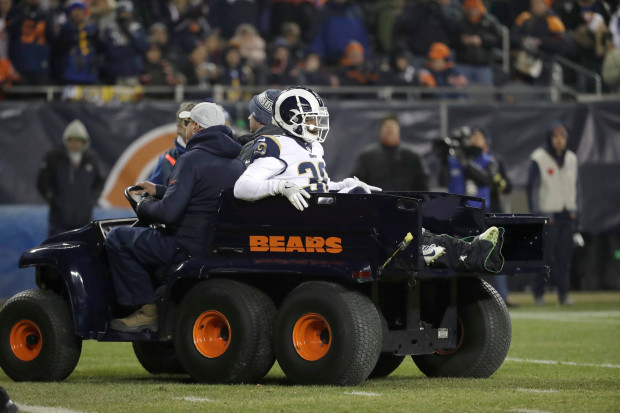 The Los Angeles Rams lost the game last night in Chicago and their CB Dominique Hatfield. Hatfield is being placed on injured reserve which will rule him out for the rest of the season according to Sean McVay. In a corresponding move the Rams will promote LB Trevon Young from the practice squad to fill the void.

Hatfield is 23-years old and will finish his second season in the NFL on injured reserve. Last year due to injury, Hatfield skyrocketed up the depth chart in relief for Trumaine Johnson and Kayvon Webster but now, Hatfield will finish his 2018 campaign only appearing in 8 games which is down from last year’s number of 11 games played.

As for Young, the Rams 6th-rounder has logged two games on the season. He was released and re-signed to the practice squad to make room on the active roster earlier in the year. Young returns to the team having recorded a fumble recovery in San Francisco during the team’s week seven tilt.

It’s unclear if the Rams will even make Trevon Young active. After all, they still have rookies like NT Sebastian Joseph-Day and OLB Ogbonnia Okoronkwo that have yet to play but have been on the active roster. It will be interesting to see what the Rams do. With Hatfield’s injury, the Rams will receive an open spot on their game day roster but will likely have to fill that with another CB and that would be UDFA pickup Darious Williams.

LA Rams Lose in un"Bear"able Fashion, Who is to Blame?