LA Rams Lose in un"Bear"able Fashion, Who is to Blame? 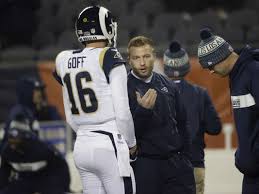 Many fans woke up this morning confused, scared, or even lost at what they witnessed last night. Inexcusable, by many fans, would be the word used to describe the performance of this Rams offense as they failed to produce a touchdown. This offense looked flustered as they struggled to create room for Gurley to run and couldn’t keep the relentless pass rush of the Bears away from Goff. Sometimes we even saw so crucial drops by the Rams pass catchers that could of kept drives alive or even help build momentum. These struggles are hitting hard for fans right now as they watched their team appear to look like the St. Louis Rams of past. How long can these struggles really last for the Rams as they look to clinch a first round bye and momentum heading into the playoffs. McVay did provide us with a glimpse of what could be going on with this quote from his post game interview.

“Consistently, over and over, I put our players in bad spots… This loss is on me. I didn’t do nearly enough for our football team today.”

While I commend McVay with his leadership to put his teams struggles on his back he isn’t the only one to blame in this Rams loss. McVay in my opinion is the main reason they lost yet I have to take some of the attention to the leader on the offense, Jared Goff. Since last week we have seen a quarterback that cant hit his receivers consistently in stride and struggles to find the open man. Goff has been seen forcing the ball downfield to Cooks in triple coverage, throwing balls past his receivers, or even putting his receivers in bad placement for them to get punished by the defender. In these last two NFC North games we have seen Goff take a huge decrease in many statistical categories.

As shown below per ProFootballReference.com the numbers don’t lie:

Within the month of December we can see Goff has taken a drop from November’s outstanding performance. His completion percentage has dropped from 67% to 48% and his QB rating is an abysmal 40.3 so far this month. Goff is struggling and has to take some of the blame for how his team is playing. The offense cant flourish without him being able to make the throws we have seen  him make earlier this season. In his last 2 games he has throw for 5 INTs which comes to almost half of his season total. He needs to take what the defense gives him and stop forcing throws into coverage. On top of his turnovers from the air he has his own issues with holding onto the ball too long and sometimes not holding onto the ball period. In the last two weeks we have seen Goff turn into a turnover machine as we saw when he gave up a Safety on Sunday for holding onto the ball too long. He also coughed up the ball earlier in the game which helped set up the Bears with good field position. Plus in weeks before we saw him cough it up against the Lions and then twice against the Chiefs. Goff has to do a better job of feeling the pocket and then holding onto the ball to keep the offense on the field. On other plays we see him hold onto the ball way too long and doesn’t hit his check-down option or throw the ball away if there is nothing there. Every play is gonna work and Goff has to recognize when to give up on a play and live to throw another day. If he keeps this trend we may see another first round knockout from the Rams in the playoffs. He can blame the poor performance of his O-line for some of the issues he is having but there is plenty of times he has a perfect pocket and cant make the easy throw. Playing against the Bears was his biggest challenge all year and he didn’t show promise in this game. If Goff can rebound from these last 2 games and get back to the QB from November we wont have anything to panic about but right now all eyes are on Goff.

While Goff has struggled so far this month lets not forget about the questionable play calling by Head Coach Sean McVay in their loss against the Bears. In this game we saw McVay bail on the run game early and thus we saw Gurley’s lowest rushing attempts all season with 11. Gurley is the heart and soul of this offense and without him being involved in the game plan we see the Rams offense struggle as a whole. McVay has to keep trying to run the ball and mix up his blocking scheme to try and get more running lanes for Gurley to get loose. We saw nothing of the sort in this game as McVay seemed to run a very simplistic version of his offense that was laughable to the Bears defense. All game long we saw the linebackers of the Bears seem to toy with Goff and the offensive line and even challenging them to run the ball with the formations they were lining up in. McVay kept lining up his receivers in bunch formations and running short routes to bring the linebackers out into the flats or outside the numbers. In this game we saw the Bears linebackers being very disciplined as they stayed the middle and kept the passing lanes tight. In these bunch formations as well we saw McVay try to run the ball but with hardly any movement from his wide receivers like we have been so accustomed to form his offense. Most of the time we see him using his wide receivers to disguise and confuse the defense so he can make someone miss on their assignment but we saw a very motionless offense on Sunday. On top of that we saw him try to run the play-action with no established run game which led to Goff running for his life and taking easy sacks.

Earlier in this game I gave the ideal way to get back on track for the Rams offense:

“McVay has to get the run game going and create more mismatches with his TE’s. Make those linebackers move and open up the middle.”

As we saw in this game though we saw the Bears linebackers have their way with the middle of the field and with Goff when they would blitz. McVay has to do a better job at utilizing all of his weapons and make in game adjustments. Coming away with only a field goal on a turnover is no way to win a game. It’s time McVay either opens up his playbook or puts on his thinking cap and creates some more plays to get this offense rolling in these situations.