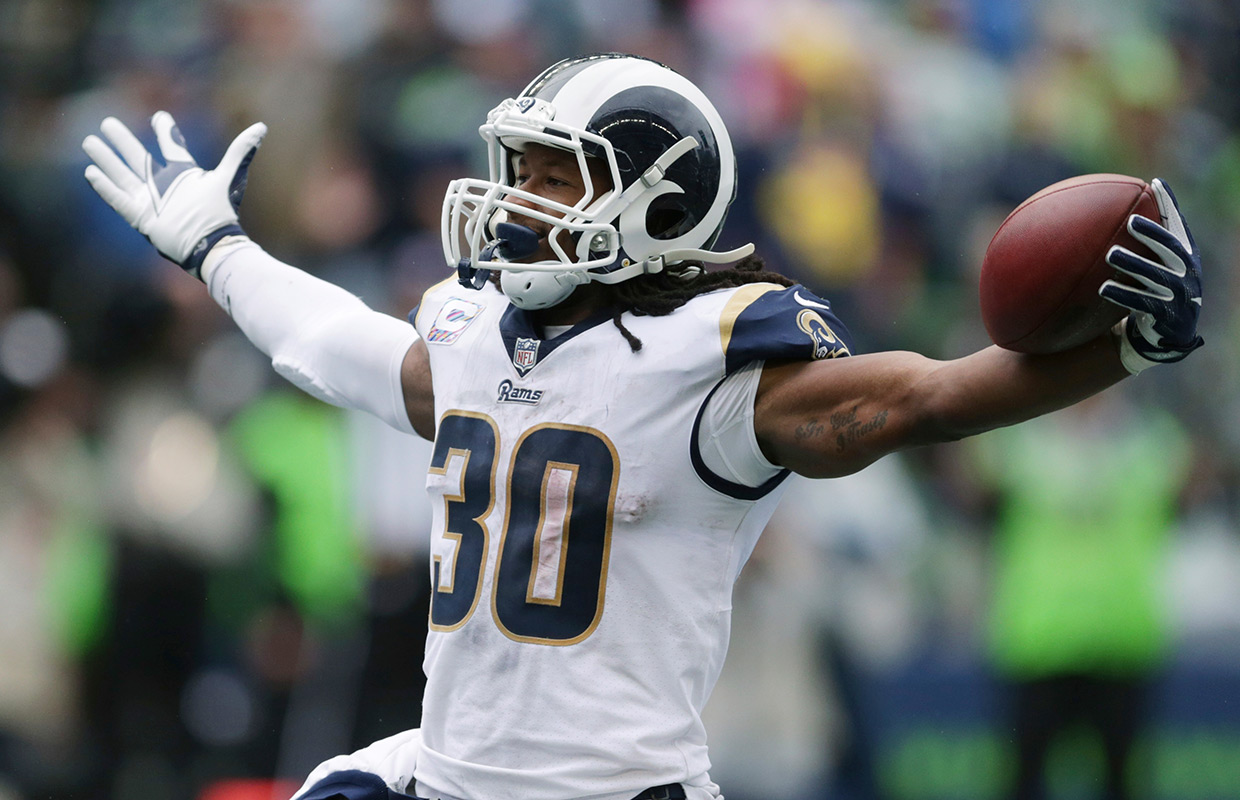 The Rams are officially the NFC West Champs for the second year in a row. After a gritty win against the Detroit Lions they are 11-1 and with four games to go against the Bears, Eagles, Cardinals, and 49ers; things are looking good. This team has a real shot to run the table and go 15-1. LA’s team is now guaranteed a playoff spot, but I don’t think the Rams plan on stopping there. This team knows there is still a lot to fight for. A win in Chicago would mean a first round bye. A win against the Eagles then puts them in good position to run the table. The Cardinals and 49ers strike fear in nobody, and although no game is an automatic victory-these teams just aren’t in the same class as the Los Angeles Rams. If the Rams really do pull off a 15-1 record it will assure them home field advantage and it would be an awesome sight to see the road to the Super Bowl go through the Coliseum. If that happens, I truly believe this Rams team will feed off of that electric atmosphere and ride that wave to a Super Bowl LIII victory.

The Bears have proven to be no slouch this season, especially on defense. Despite coming off a loss to the lowly New York Giants, this team is a legitimate threat. Khalil Mack isn’t Aaron Donald, but he is a DPOTY candidate and a really special player. The rest of the defense is not to be taken lightly, but Mack definitely elevates that defense in a way that makes you realize you have to have a really good game plan in place to limit his effectiveness. It helps that although Mitch Trubisky didn’t look great as a rookie, he has made strides this season as a QB which elevated their offense from putrid to maybe good enough if the defense has a day. Ultimately, I think the Rams pull out a win in the cold Chicago nighttime atmosphere to seal a first round bye. I predict a score of 41-16. I think the cold weather with that defense presents a real challenge, but I think Goff bounces back from a bad game and we ride the Gurley train to victory.

The Eagles have been disappointing to say the least this year. The Eagles after being crowned Super Bowl Champs, have experience “the hangover,” going 6-6 thus far. Maybe it is the injury, maybe it is a true regression, maybe it is just bad luck, but Carson Wentz hasn’t been the same QB this year as he was last year before going down to an ACL injury. He isn’t trash or anything, but he should’ve elevated his game again this year. Instead he is looking at a stat line of 2846 yards, 18 TDs, and 7 INTs. But it isn’t just Wentz, when a team that talented fails to reach expectations it means the whole team has underperformed. At one point, I thought this would be one of the toughest tests of the season and thanked the football gods it was in LA and not Philadelphia. Although I still don’t think this game is a walk in the park, I’m confident this team can win this game in the Coliseum. Wentz is still a good QB capable of delivering a dagger to the Rams heart, but the Eagles have only gone over 30 points once all year and that was against the Giants. The defense has done a solid job of holding teams generally, but I just don’t think they have what it takes to hold this offense back in LA. I predict a score of 38-14.

The 3-9 Cardinals are just that, 3-9. The season for them is essentially lost with only pride to play for. I don’t see any realistic scenario in which they make up ground to rise above the Seahawks. This team has been blown out multiple times this season and lost to the Raiders. Josh Rosen looks awful throwing more INTs that TDs in his 10 games and a 6.1 YPC, I just don’t see him doing anything against our secondary. I think he throws 3 picks, one to Talib, one to Peters, and one to John Johnson III. I think Aaron Donald wrecks the offensive line to the tune of 4 sacks with more coming from guys like Fowler and Ebukam. David Johnson is talented but he is averaging 3.7 YPC, coming off a major injury and on a bad team his situation just reminds me of the wasted career Stephen Jackson experienced playing for the Rams. I think he may bounce back next year with a different team, but this game I think he gets bottled up and shut down. I predict a score of 49-7 and another sweep of a divisional opponent.

The 2-10 49ers are very likely locked into the number one overall pick in the 2019 NFL Draft. They do not look like they can hang with the Rams in the least bit. Although they played the Rams tough in 2017 when the Rams won in a shootout, this year we blew them out 39-10. This team has nothing but pride to play for and it will be the last game of the season. They’ll want to do whatever they can to hurt the Rams chances at glory. Losing Jimmy Garoppolo hurt even though I think he is a widely overhyped QB. With a roster that lacks much talent in some important spots, the 49ers just don’t look like much. Their draft picks have underperformed severely, including the Reuben Foster saga due to allegations of domestic abuse again. Older free agents such as Pierre Garcon haven’t made a difference in wins or culture. They’ve also failed to bring in any impact free agents (unless you count Garoppolo, McKinnon, and Sherman). This team is in rebuild mode in my opinion despite what many in the media will say in the offseason. I predict a score of 42-13. Going 15-1 would be sweet, finishing that out with a sweep of the 49ers would be even sweeter.

This team is your NFC West Division Champ for the second year running. A talented roster built with a good mix of young superstars and older experienced veterans along with an all-star cast of coaches led by Sean McVay has given us two winning seasons now with more to come. This team isn’t resting on their achievements though, no they want more. They want Conference Champs. They want Super Bowl Champs. The team is in sync with each other and the energy and buzz surrounding the Rams just feels different. Last year was fun and exciting but it always felt like we weren’t quite ready for the biggest stage. This year though, it feels like destiny. When one unit looks awful, the others step up and make the plays needed. They’ve won with offense in shootouts, they’ve won by ground and pound, and they’ve won with defense and special teams. They just find ways to keep winning and I don’t see that stopping. With guys like Aaron Donald, Todd Gurley, and Jared Goff this team has as good a chance as anyone to hoist the Lombardi Trophy at seasons end. This team is so fun to watch and I’m grateful to be a fan that gets to experience this all after suffering through losing season after losing season always thinking it would get better. I think this team is built, not just for success this season, but for many seasons to come. This team runs LA, this team runs the NFC West, now let’s hope that at seasons end we can say the Los Angeles Rams run the NFL.