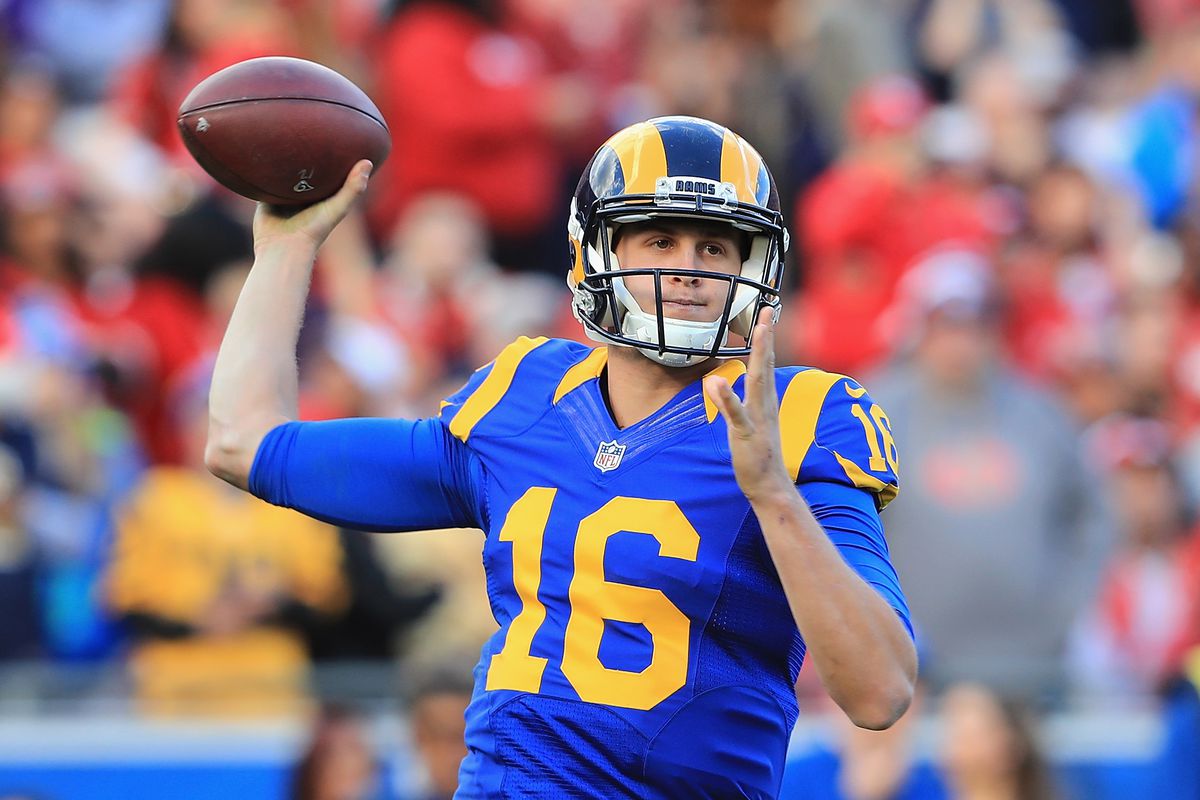 I remember when the Rams drafted Jared Goff. He was my QB1 in that 2016 draft. I remember screaming, “Get ready for the Bear Raid!” My next thought was existential dread. Small frame, bad offensive line, no weapons, is this Sam Bradford 2.0? Then during a rookie year that saw Goff struggle to get the nod over Case Keenum, then going 0-7 as a starter looking every bit a bust it didn’t look good. In the offseason, there was talk of starting Sean Mannion. This sounds like a GMs worst nightmare.

We’ve come a long way since 2016. As a franchise, as a fan base, we’ve grown into an exciting spectacle. A lot of that is Sean McVay. But a lot of that is number 16 as well. Jared Goff has become a legitimate MVP candidate. He’s earned the right to be considered this season. But it begs the question, what makes an MVP? Whatever your criteria, Goff is in that discussion while leading an energized Rams team that has brought back the same buzz we experienced during the Greatest Show on Turf.

Let’s look at the candidates talked about most. Brees, Mahomes, Goff, Luck. That is some good company. Eliminate Luck, he’s 6-5, stats don’t matter if you don’t win enough games. Goff gets dinged because of McVay, but Mahomes has Andy Reid and Brees has Payton. Newsflash! Successful quarterbacks usually have good coaches behind them. Goff has MVP like stats. 67.7% completion percentage, 3547 yards, 26 touchdowns passing and another on the ground, 9.3 yards per completion, 10-1 record. Extrapolate that and you have 5159 yards, 39 total touchdowns and a really good chance to run the table and go 15-1. That is better than Tom Brady in 2017 and Matt Ryan in 2016. So why the disrespect? Brees and Mahomes have been fantastic for their own teams. But there is more to it that stats, despite what most people think. Listen, I like Brees and Mahomes but Jared Goff came from a college spread offense and became a West Coast Offense, cool/calm/collected field general. He went from a PFF grade of 79.8 to 92.1 in a year, good for 3rd in the NFL.

What sets Goff apart considering he isn’t really first in any important individual stat? What puts him above Brees or Mahomes? What makes him an MVP? It is simple, Goff is irreplaceable in this offense. He is THE most valuable player. Take Brees off the Saints, Teddy Bridgewater with that supporting cast still wins a lot of games. The Chiefs under Alex Smith were 10-6, winning their division and Smith had a PFF grade of 85.9. Take Goff away from the Rams and you’re looking at Sean Mannion and you get flashbacks of 2016. Jared Goff just plays big in big games and he does it in a way that seems like he had a quiet outing. He isn’t a “gunslinger” and he isn’t what most would call “mobile” But when the game has been on the line, Jared Goff makes the toughest throws in the tightest windows and occasionally even goes into giraffe mode when the pocket collapses. He doesn’t make mistakes. His confidence never wavers, seemingly with ice in his veins and a laser sight guiding his arm. He makes the most needed play in the most needed games and he does it like it is a game of catch with his Dad.

While Drew Brees and the Saints lost a shootout to the Bucs and narrowly beat the Browns, the Jared Goff led Rams embarrassed the Raiders on the road and destroyed the Cardinals in LA after not playing a single pre-season snap. Sure, Brees beat Goff in a shootout, but not before he led them back from a big deficit when most young quarterbacks would have folded. Mind you this was a squad missing Aqib Talib and honestly I think he would have made a big difference in that game. Meanwhile in Mahomes 2 losses (NE/Brady & LA/Goff), Mahomes threw 5 interceptions and lost 2 fumbles, he folded when it counted most. Goff beat Mahomes in one of the biggest and best games my eyes have ever seen after beating a Seattle team that could contend for a playoff spot potentially. That is how an MVP responds to adversity. Even after losing his safety blanket in Cooper Kupp, Goff found big plays out of unlikely heroes; Josh Reynolds, Tyler Higbee, and Gerald Everett to win against another MVP candidate on Monday Night Football. Jared Goff leads the league in 4th quarter comebacks with 4 this year.

Then on Monday Night Football in the biggest game of the year, against Mahomes and the 9-1 Chiefs after dealing with community tragedy including wildfires and mass shootings and the adversity of traveling to Colorado to train for Mexico City and then moving the game back home, Jared Goff raised the bar out-dueling another MVP candidate. Winning 54-51 while throwing for 413 yards and 3 scores and putting another one in the end zone with his feet while not throwing a single interception. Jared Goff became what everyone wanted out of that 2016 NFL Draft; a franchise quarterback, a leader, a winner, and an MVP. He may not win it this year, that’s just the way these things go sometimes. But rest easy knowing he and the Rams will be in these kinds of conversations for a long time and that Jared Goff would trade an MVP for a Lombardi Trophy any day.

Rams in the AAF