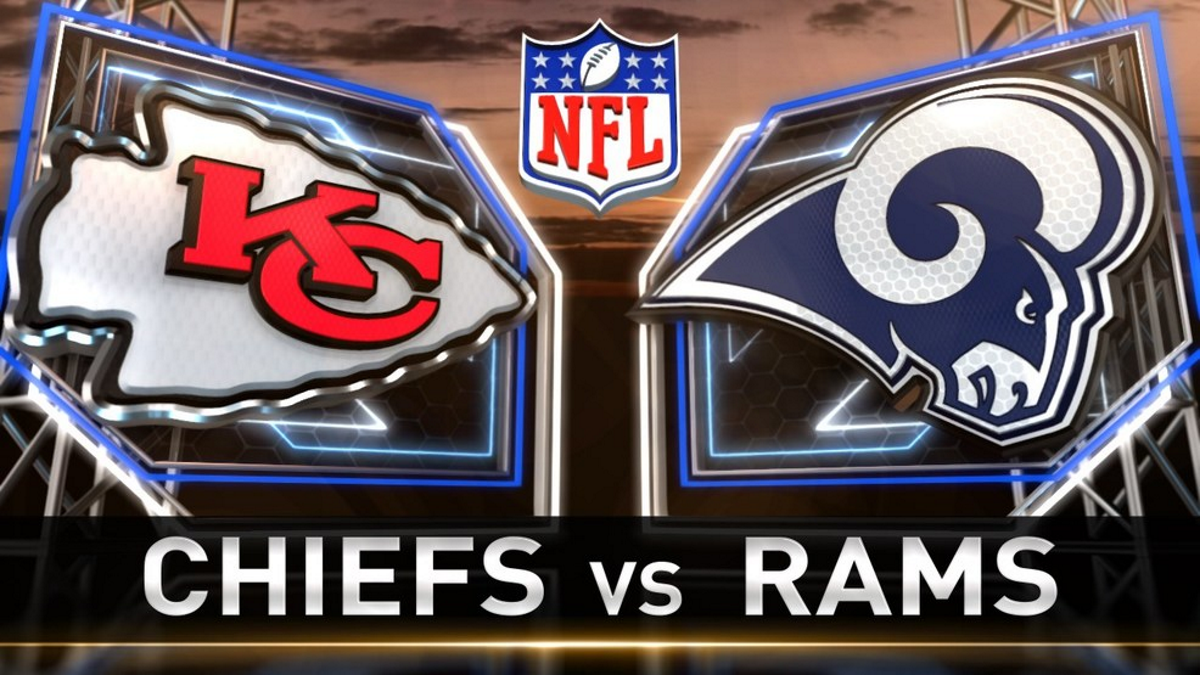 If you would of told me that the one team Rams would have to worry about at the beginning of the season was the Chiefs you would of had me laughing until I croaked. Yet, here we are with the 2 best offenses in the NFL battling it out on Monday Night Football for the best record and possibly more… What I am referring to is the elephant in the room, that every sports writer and fan has been talking about, the possible Super Bowl match-up between the Rams and Chiefs. Could this really be the preview to what we will see in February when the whole world is watching? Lets discuss the match-up for Monday and you decide if this is what you want in Atlanta come February.

If you’re a die-hard fan of either team or just a casual fan of football, this is the game of the year to watch for many matchup reasons. These two titans are about to battle it out in LA for the top record in the NFL.

The Chiefs offense is full of weapons that can tear apart a defense at any moment and the Rams have to be ready for this fireworks show. Mahomet has been the ringleader of this offense as he has thrown for a league leading 3,150 yards and 31 touchdowns. His ability to scan the defense and use his arm strength to throw the ball wherever he wants has made it all too easy for this
offense. His favorite weapon Tyreek Hill, has been wrecking havoc on opposing defenses with his speed and quickness out of his cuts to bust open deep fade routes or even simple catches over the middle. Look for Peters to keep Hill in front of him to prevent any mistakes this week, that is if he has learned from his past mistakes like he claimed he has. Never-less, if Peters can’t keep coverage on Hill then we might see another embarrassing phone call and 200 yards receiving from the speed devil. Safeties on the Rams will also have to play good coverage over top of Hill and communicate well with the corners to ensure no busted coverages happen. Another weapon the Chiefs have is Travis Kelce, who will make his presence known over the middle where he likes to thrive and make mismatches with either the linebackers or the safety. Kelce has such great field awareness and quickness that it makes it difficult to cover if you’re a linebacker but big enough that he can box out the safeties and break tackles. Lastly the Chiefs have their own star running back in Kareem Hunt who has almost the same skillset as Gurley. Hunt is good at screens and running the ball through the middle but is not a great route runner. Granted Hunt is still young and getting better every week with his receiving skills but not on the same level as Gurley. Look for the Chiefs to run the ball more this game as the Rams rank 26th in run defense. If the Chiefs can abuse the weak run stopping ability of the Rams then they can run out the clock and take control of the game. Look for the Rams defense to try and gap blitz more often to keep the Chiefs in a passing situation most of the game to allow their pass rush to attack Mahomes. If the Chiefs can establish the run early and often then they will wear out the Rams defense and have the advantage.

Just like the Chiefs the Rams have a very talented offensive as well. Every time the Rams get on offense they seem to drive down the field and score with ease. Their ringleader on the offense, Jared Goff, has played his best season yet as he is making pin point accurate throws to receivers to give them every opportunity to win. He is currently second in passing yards behind Mahomes with 3,134 and 22 touchdowns. So this Chiefs last ranked passing defense will have their hands full on Monday in the Coliseum. Chiefs will have to make Goff uncomfortable as he sits behind one of the best offensive lines in football. They will have to use many different blitz packages and looks to try and catch Goff off guard and make him turnover the ball. Look for Goff to attack the Chiefs safeties early and test how disciplined they are in pass coverage. Even with this Chiefs defense in the top 5 for turnovers don’t expect Goff to make many or if any mistake in this game. Rams will also look to get Gurley going early so they can set up the play action and open up the field for their receivers and for their tight ends that they are using more since the injury to Kupp. If Gurley gets rolling they will pull the linebackers up and the firework show will begin. Look for more screens in this game and Goff to use Gurley as a distraction to keep the Chiefs guessing on every play. As for the receiving core without Kupp, the Rams will use more TE sets and try to get Reynolds involved over the middle so Cooks and Woods can stick to doing their thing. Cooks will look to attack Kendall Fuller who will most likely be covering him for most of the game. Fuller is a decent corner but doesn’t get matchups against speedsters like Cooks very often. Look for McVay to use Cooks to stretch the field more this game and test Fuller which may end up to Cooks having his biggest outing this year.

Defense: Over 2.5 Sacks, Over 2 Turnovers

Both defenses will look to make the opposing quarterback uncomfortable with their pass rush. The Rams have the better pass rush but if the Chiefs want a chance at slowing down the arial attack of the Rams they need to pressure Goff. Best way for the Chiefs to give pressure on him is to send pressure from the outside on a blitz to make him leave the pocket and use his legs or improvise. If the Chiefs can’t get to Goff then he will tear them apart like a family to the turkey on thanksgiving. On the flip side, Donald and Flowers need to pressure Mahomes and keep him uneasy to limit the amount of time he has to let plays develop. Mahomes has a tendency to keep waiting until his receiver has enough time to finish his route which results in easy sacks or turnovers. Depending on what each team does to the opposing quarterback will determine this game. Both offenses can score every drive but if the defense doesn’t do it’s part then this game will be the highest scoring game we possibly could see. This is a matchup for the ages and most likely will be the future Super Bowl matchup that we will see in Atlanta come February. If both teams can keep healthy heading into the playoffs I see no reason why this isn’t the preview of the Super Bowl. Time will tell if these teams can overcome the schedule in front of them and stray away from the injury bug but be ready for a showdown in LA this Monday.