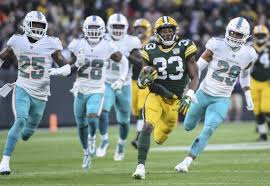 Jones, listed as a sit ’em last week, is coming off his best performance we have seen with over 32 fantasy points. He should put up another great fantasy outing this week against the Seahawks, who have given up an average of 6 yards per rush since Week 7. He also played the role of the true featured back when the Packers beat Miami and look for them to lean on him again this week.

Watson has flexed most of the year with his fantasy performances. This week is different as he plays A Washington team that is tough against the run. Look for this Texans team to lean more on the passing game as they play with their new weapon in Thomas to open the field and get Hopkins rolling. This passing game is always a threat and will be active against the Redskins as they look to take away the run game. I expect a huge outing from Watson this week and he should be starting in your lineup.

Doyle finished last week with an average fantasy performance, but he still led Colts tight ends in playing time and almost had a touchdown. Even with this matchup against the ferocious Titans defense looks like a nightmare scenario, just remember that their defense hasn’t faced a relevant fantasy TE at all this year. Look for him to put up good fantasy numbers in this matchup as we ride a hot hand in Andrew Luck.

I’ve never been a huge fan of Miller in fantasy with his inconsistent play, especially as he looses touches to Alfred Blue when he cant get anything done on the ground. When he finished with a 6.8-point stinker against the Broncos I figured its time to sit him once again against this tough Redskins defense. Running backs have only averaged around 71.5 rushing yards per game against this stiff Washington defense since Week 7.

Stafford has been a regular member of the Sit ‘Em crew, and for good reason. He’s been a complete disappointment as he has failed to score more than 18 fantasy points in five straight games. Stafford also has almost as many turnovers as he has had touchdowns in his last 4 games. He’s thrown for just six touchdowns with five turnovers in those games and his line isn’t giving him any help as he was sacked 16 times in his last 2 games. I’d keep him on the bench in a home game against the Panthers, regardless of how tempting the matchup is.

Uzomah hasn’t been targeted as much as fantasy owners would like, even with A.J. Green out for a few more games, and has now compiled under five catches and 40 yards in his last three games. He’s hasn’t scored since Week 4, and playing against the Ravens is not an ideal matchup for him as their defense ranks close to the top. I’d search for an alternative tight end to play for you this weekend.

Miller has been seeing an uptick in targets the last few weeks and had a huge fantasy performance last week with over 100 yards and a score. It appears he is more comfortable in this offense and is learning the playbook which is giving him more playing time. Look for Nagy to continue to keep him involved in this offense and for his fantasy value to increase as the season closes. Grab him now and play him with high upside as they play the Vikings with their best corner playing on Robinson all game.

As much as this leaves a bad taste in my mouth for saying Reynolds is a sleeper this week he will have plenty of opportunity to show his worth. In his first start with Kupp out he put up a nice stat line of 3 catches for 42 yards and 2 scores. Definitely has some upside as opposing teams corners will be focused on locking down on Woods and Cooks and this will in turn give Reynolds more opportunity to get targets. Snatch him up as he has huge upside in this high scoring Rams squad every chance they get the ball.