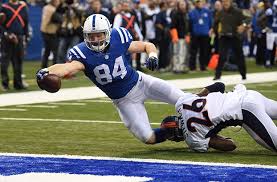 Since returning from injury in week 6 Mack has been nothing but a complete stud. Mack has scored over 30 points in PPR leagues the last 2 weeks before the Bye. Expect him to come back from the bye even better as he looks to continue his dominance.

Andrew luck had one of his favorite targets return from injury last week and threw him the ball six times for seventy yards and a touchdown. Look for Doyle to continue this workload of receptions as they play against a Jags defense playing some of its worst football. If he hasn’t already been picked up in your fantasy league pick him up and plug him in your starting lineup.

Duke is finally a viable fantasy option once again since the firing of offensive coordinator Todd Haley. Last week he put up over 27 points in PPR leagues in a dominant performance. Start him again this week as he faces an injury riddled Falcons defense already giving up an average of 108 rushing yards a game.

Nothing seems to be going right for this Packers team and all year long the running game has been non existent. Sit Jones this week even if he is the featured Back in Green Bay. Jones is only averaging around 8 points a game and is up against a good Dolphins defense that will challenge this Packers team.

Sit Barber this week as he goes against the 4th best rush defense in Washington. Currently their defense is allowing less than 90 yards a game to opposing running backs. Barber also has been very inconsistent all year and the Bucs will look to abandon the run game if they fall behind early.Take your chances elsewhere if you are looking for a bye week addition.

Tate suits up as a member of the Eagles against a tough Cowboys secondary. Their defense has allowed an average of 44.1 yards and less than 10 PPR points a game, and just three touchdowns to opposing receivers. I’d consider Tate a risky option to play this week.

Scantling is owned in around 20% of fantasy leagues and is a nice addition going forward as Allsion has been put on IR. Since week 5 Scantling has averaged 14 points in PPR Leagues and will look to increase those number with this opportunity. Look for Rodgers to target him more often with his top 2 options being guarded by the opposing teams best corners.

Last time around the Seahawks played the Rams both Carson and Davis put up great numbers. Davis has had his numbers flex all year and with Carson’s status up in the air for this game it may be worth picking up and playing if Carson is unable to play. Davis is also used more in the passing game and has more upside to stay in the field on every down. Add him this week as a nice bye week addition if your roster permits.