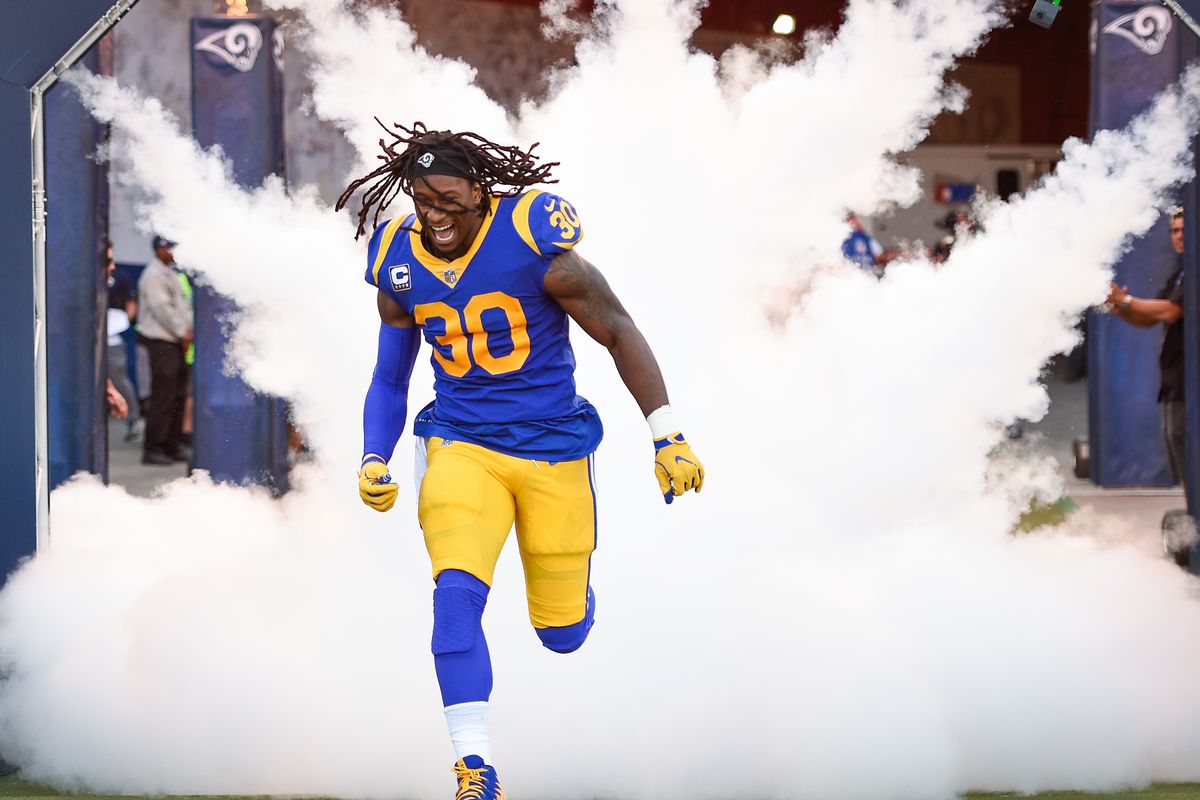 MVP: Most. Valuable. Player. It’s strange how we define this award every season. It all comes down to what you perceive as most valuable.

Is it the defensive tackle that dominates the line of scrimmage play after play? The left tackle that protects his quarterback from the blindside hit? Or is it the running back that is on pace to break the NFL’s single season touchdown record?

That last one refers to the one and only Todd Gurley of the Los Angeles Rams.

Going back to what i said earlier about what we define as valuable. The past five and 10 of the last 11 winners of the NFL MVP Award have been quarterbacks. It’s nearly impossible for a running back to win MVP.

Gurley has been one of, if not the most dominant player in the NFL through the season’s first seven weeks. After recording three touchdowns in Sunday’s 39-10 win over the 49ers, he now has a league-high 14 rushing and receiving touchdowns.

That’s an average of two per game which would put him on pace for 32 for the season. LaDainian Tomlinson currently holds the record at 31 which was set in 2006.

The Rams running back currently has more touchdowns than not one, not two, not three, not four, but eight NFL teams.

The Bills, Titans, Raiders, Cardinals, Redskins, Giants, Jaguars, and Cowboys all have 13 touchdowns or less this season.

Gurley was named offensive player of the year in 2017 after yet another historical year, but it was Brady who took home MVP.

The former Georgia bulldog put up nearly 2,100 yards from scrimmage and 19 touchdowns after a disappointing sophomore season in which many gave up on him.

The value of the running back position has taken a severe dive over the past 5-10 years. The Giants taking Saquon Barkley second overall was unprecedented.

When a Kareem Hunt can be found later in the draft, why should teams take that position in the first round, let alone top 10.

When guys like James Conner can fill in for LeVeon Bell, how valuable is the running back position?

As of right now, pretty valuable, at least to the Rams offense.

The Rams and Goff use play-action on nearly 40% of their passes. That’s almost 10 percentage points more than any other team and quarterback.

None of that is possible without Todd Gurley as the target of most of those fakes. If the defense doesn’t have to respect it, they won’t bite for it.

In other words, the Rams’ offense revolves around Gurley.

However, as mentioned earlier, 10 of the last 11 players to win the NFL MVP award have been quarterbacks.

Right now you could make cases for both Jared Goff and Patrick Mahomes for MVP. Right now, Goff’s numbers through seven games are on pace with those of the past five quarterbacks to win MVP: Tom Brady, Ryan, Cam Newton, Rodgers and Peyton Manning.

Mahomes has completely transformed what was already a very good Chiefs offense coached by Andy Reid.

One of those two quarterbacks or someone else entirely may end up winning the award, but what Gurley is doing is historic and that in itself is worth mentioning.

For a running back to win the award, they need to be doing the historic, and Gurley is doing just that.

Tomlinson won the award in 2006 after breaking the touchdown record and Adrian Peterson took home the award after rushing for 2,097 yards, just eight yards shy of Dickerson’s 2,105.

If Gurley scores eight more touchdowns this season – which he is on pace to do – it would put him number one on a list of some of the all-time greats.

Gurley does for his offense what no other back in the NFL can. He does for his team what Drew Brees and tom Brady do for theirs. If that’s not valuable, I don’t know what is.