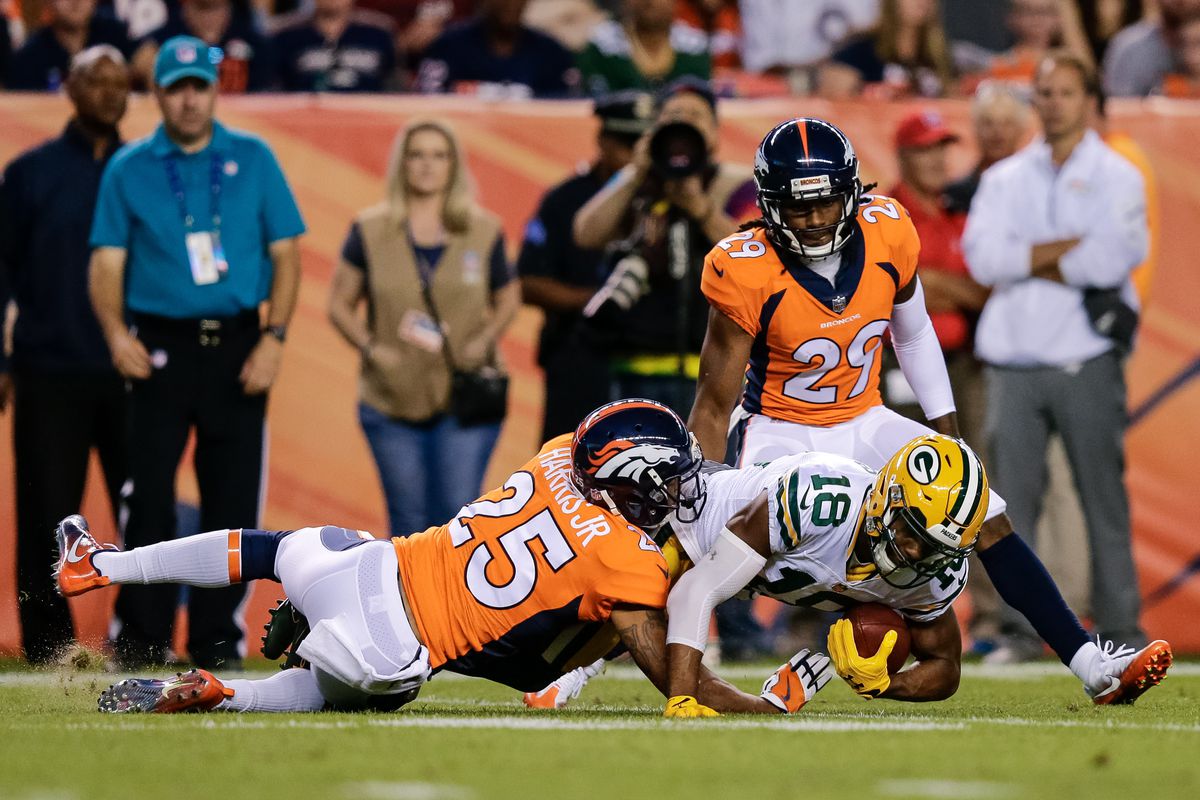 The NFL Trade Deadline is fast approaching and this is the last opportunity to put together a final roster in a team’s quest for the Super Bowl. The Rams are sitting at 7-0 heading into their week eight matchup back in the Coliseum versus the Green Bay Packers but even at 7-0, the team does have some positions of weakness. The Rams could use another player either at cornerback or on the edge and so here’s a list we compiled that would make sense for the best team in the NFL.

Who’s the best EDGE guy in the league right now? It might be Lorenzo Alexander on a 2-5 Bills team that doesn’t even really start him. Alexander seems like a perfect veteran option for a team that is on their way to a playoff berth and a Super Bowl but instead, Alexander finds himself at the age of 35 playing the best resurgent football possibly in the league and playing it on a team that has zero offensive presence. Alexander surprisingly has elite bend even at his age and is just well-rounded all across the board. The Rams could use Alexander and with his age, there’s a chance he would be the cheapest option. Alexander only has a $3,600,000 cap hit and is a free agent in 2019 but make no mistake, if the Rams seriously are all in on this season they will consider Alexander for this season.

Shaq Barrett has been the one player that you just have to consider for the Rams for a while. Wade Phillips connection is the obvious point and that will be mentioned a bit but what Barrett is able to do as a pass rusher and as a run stopper is impressive. Factor all of that in with the simple fact he’s 25 years of age and was signed to a $2.5M tender that will make him a free agent after this year and you have value. The Rams may not be able to afford Barrett next year but with his expiring contract and the play of the Denver Broncos, there is a good chance Barrett could be available for the right price. Barrett is considered a notch above teammate Shane Ray so the compensation could be as high as a third-round pick.

Markus Golden is a very talented pass rusher that happened to suffer a serious leg injury last year that derailed his season and the start of this season. Golden has only played four games this year and it’s early but it appears the Cardinals have moved to free agent acquisition Benson Mayowa as their priority start next to Pro Bowl rusher Chandler Jones. Golden is going to be a free agent after this season, he’s shown in the past he can be a problem as he had 12.5 sacks in his 2016 season but without James Bettcher, Golden may have fallen out of favor with the new regime and will likely be hitting free agency without a deal from Arizona. The Rams could use Golden and could probably buy low on him at the deadline. He’s a cheap option, 27-years old, talented and likely a potential buy-low candidate is not just a trade but in free agency next year.

Irvin is a former Seattle Seahawk that the Rams know fairly well. He decided to sign a big contract in Oakland in what was one of the many moves that disbanded the original Super Bowl Seattle defense. Irvin is still considered a solid pass rusher, he excels in that area and seems to be a little bit of a struggle when it comes to setting the edge and stopping the run. Make no mistake, the Rams would not be trading for a Bruce Irvin to help their run defense but rather to light a fire underneath the team’s pass rush. At this point in time, the Rams are looking at an elite interior defensive line presence with flashes off the edge. There’s a good chance the team will stick with their rotation of Samson Ebukam, John Franklin-Myers, Matt Longacre, Trevon Young, Justin Lawler and eventually acclimate Ogbonnia Okoronkwo but still, it feels like the Rams are just missing that one guy to bolster that area. Irvin isn’t the sexy option but he might be the best as far as price is concerned.

Irvin has a $9,250,000 cap hit but if the Rams took on some that this year they could likely fit Irvin under the salary cap and then next year they could release Irvin and take all of his money right off the books without penalty. He’s 31 years old, so in this case, the compensation would be around a late-round pick.

Ray has been a player that has buzzed around the Rams fan base. Many upon many want him to be paired with Wade Phillips again, some of this also goes back to the St. Louis Rams fans that also watched Ray in college at Missouri. He’s been a slow developer and slowly but surely he’s starting to come along. Ray might not even be traded because he is still a young piece that Denver likes but the fact that makes it likely Ray could be traded is that he is a free agent after this season. At only 25-years old, the Rams could trade for Ray and extend him to possibly be a long-term piece. Here’s the issue, the Rams would have to give up decent compensation due to the fact Ray is still a talented player, his age and money are also attractive in a sense. Ray only has a $2,901,467 cap hit which would be extremely manageable for any team. With the familiarity in Phillips’ system and Woods’ system who is a disciple of Phillips, the Rams could potentially acquire someone ready to contribute as soon as he stepped foot in the building.

Gareon Conley shouldn’t be available but in the situation with the Oakland Raiders, he is. The Rams saw the Raiders earlier in the year and saw Conley as well. Conley had a couple of catches he gave up to Brandin Cooks in that game but on three targets between Cooper Kupp and Robert Woods, Conley held them to 0 catches when targeted. Conley is a young 23-year old former first-round pick and makes too much sense for a team like the Rams that don’t have a surefire long-term plan at cornerback. With Aqib Talib’s future uncertain, Marcus Peters either being a franchise tag candidate in 2019 or a long-term signing and Nickell Robey-Coleman as the only guy signed until 2021, Conley would add an extra element to the Rams defensive back group. When you watched Conley at Ohio State, he played with Marshon Lattimore and Denzel Ward but Conley was impressive when his number was called. It’s not working in Oakland, it doesn’t even seem like they will try and get an Amari Cooper-like package for him. With that being said, Oakland is going to cut their losses and the Rams could get a first-round cornerback for a steal of a price.

The Rams already have established Denver as a trade partner with the trade for one of their corners earlier in the year, why not another? Aqib Talib could be just a one-year thing for the Rams, Chris Harris Jr. is two years younger and has just as much familiarity with Phillips. Harris Jr. has been a top-flight cornerback for years, he has recently gone downhill a tad and now with the Broncos struggling to win this season, he could be available. The team drafted Isaac Yiadom, traded for Pacman Jones and have Bradley Roby from a few drafts ago if the team decides to pull the plug on Harris Jr. The compensation could be tricky here since Harris is quite a talent but he also will cost you some money. While Harris’ deal is through 2020 and is fairly flexible, the Rams would have to add his contract to the books which is close to $9M in cap space in 2019. Denver would have to take a bit of that cap this year in order to get this to work and so the compensation would have to be a little higher. Harris Jr, Talib, Peters, Robey-Coleman, Sam Shields and Troy Hill would no doubt be the scariest combined CB group in the league. Is it a little overkill if Talib is ready to play by the playoffs? Yes, but Harris might be too good to pass up on under the circumstances if he’s available.

The other starting cornerback in Denver is Bradley Roby who is a former first-round pick that was mocked by many back in the day to go to the Rams out of Ohio State. Roby is a talented cornerback but has not been the first round level player the Broncos expected coming out of the draft. Roby is still only 26-years old and would likely be a player either the Broncos try to continue developing with this team or a player that the team pulls the plug on it and admits they didn’t receive what they expected. Roby had his fifth-year option picked up in hopes that Denver would find what they wanted in him before having to sign him to an extension. Well, to this point, Roby is solid but he’s not blowing the doors off John Elway’s office and unfortunately, when it comes to a team potentially underachieving, personnel gets shipped out. While Harris Jr. is three years older and more likely to be dealt, there is still a chance due to the nature of Roby being a free agent after the season, that he ends up being traded. The New York Giants started the cornerback trading after sending their former first-round pick Eli Apple to the New Orleans Saints for a 4th round pick in 2019 and a 7th round pick in 2020. Roby is arguably older, not as talented and has a lower ceiling. If the Broncos decide to cave and trade away their players at the deadline Roby might be able to be had for a fifth-rounder.

Three Players the Rams Could Trade Away