LA Rams vs. Minnesota Vikings: Revenge of the Rams 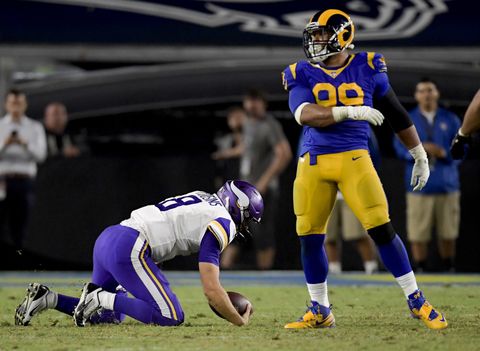 If you thought Thursday Night Football games were the worst that the NFL could put out, then you were happily surprised this week. The undefeated LA Rams took on a formidable foe in the Minnesota Vikings in a gun slinging showdown. The Vikings came into the home of the LA Rams this week looking to end the Rams perfect season. Little did the Vikings know that this Rams team is the best in the NFL and they weren’t going down without a fight. Last year the Vikings beat the Rams in a stunning fashion on their home field 24 to 7. This year it was a different story when the Vikings came into the coliseum for a rematch.

Right out of the gates both teams were looking to score early and score fast as the Vikings got on the board first halfway through the first quarter. For the next few drives the Rams and Vikings exchanged points as each team went on a pass happy scoring tear. Throughout this game both QB’s were making excellent throws which led to each QB passing for over 400 yards through the air. Each QB was perfect in the turnover category as they both looked to go for the kill on every throw. In the first half of this game we saw Goff get off to a hot start as he found Kupp for a 70 yard touchdown to get the offense rolling. Only to find out that this was only part of the scoring rampage that Goff was about to unleash upon this Vikings defense. Kupp became the star of the show on offense as he went for career high in receptions, yardage, and touchdowns. Kupp ended up with 9 receptions for 162 yards and 2 touchdowns as he tore through the Vikings injured secondary.

Both teams struggled stopping the passing game as they each were missing starters in the secondary. Even with the Rams having Peters back for the game was not worth the mishaps that he brought while playing hurt. Peters was hampered by the injury he received against the Chargers last week and it was noticeable as he seemed to ease up on his attack on the ball carriers. Early in the game Peters allowed an easy touchdown when Cousins floated a pass to Robinson in the end zone. Peters usually would be able to make the play and take the ball out of the air to prevent the score but the injury seemed to hold him back. On the Vikings side they lost T. Waynes early on in the game and kept loosing Rhodes due to cramps and lack of fluids. With these key losses to their secondary the Rams took every chance they could get and put up a 5 touchdown performance through the air.

Aaron Donald is finally back to terrorizing the Quarterback as he finally got his first 2 sacks of the year. Granted his sacks came in the 4th quarter but the Rams definitely needed it to help seal the game. It almost seemed like Donald and his counterpart Suh were only good for stopping the Run game and letting the Qb take his chances against the secondary. Thankfully that was not the case tonight as Donald looks to have found his grove as he delivered some nice passing rushing techniques to get 2 easy sacks on Cousins. Hopefully this carries over to the next game and donald start to rack up his sack numbers. Last week donald was asked how he felt about his lack of sacks and he came out and said that he was frustrated in his inability to come away with a sack. Looks like that frustration finally paid off and he came away with his prize.

This offense was definitely hot through the air but that doesn’t mean that they didn’t use Gurley on the ground. Gurley had a nice outing with 17 carries for 83 yards and had 4 receptions for 73 yards and a score. Most people overlooked how Gurley played in this game due to the amount of incredible passing plays each QB made. Let it be known that he still is the focal point of this offense as he constantly set up first downs for this offense and gave great pass protection for his QB. As well as Gurley being a focal point of this offense lets not forget that Cooks had his NFL touchdowns a LA Ram. Cooks started off the game slow but picked up the pace as the second half began and put up 116 yards on 7 catches. This Rams offense has so many weapons and Cooks seems to fit right in as he is selfless as he supports every receiver that get a touchdown or big play. Cooks plays so much better in this offense compared to the previous talent of Waktins that the Rams had last year. Every time the ball is in Cooks hands he makes defenders miss and makes great catches in stride to open up the field for GOff and this high flying offense. Even when Gurley gets to run the ball Cooks is a great run blocker as he gives that outside edge for Gurley. There is absolutely nothing that Cooks can’t do for this offense that doesn’t make them better and the Rams are relishing every opportunity they give him.

Lastly lets not overlook the amazing performance that Goff put out there in the Coliseum. Goff left this grudge match with 465 yards on 26 completions and 5 touchdows. For everyone that just read that sentence, yes he threw 5 touchdowns and 465 yards. Some of the media speculated the Goff is just a system quarterback and not a true franchise quarterback. Tonight was the night that he proved all the doubters wrong as he put up the most pass attempts in a game with a perfect 158.3 passer rating in NFL history. The last QB to have this record was Ken O’Brien in 1986 against Seattle with 32 attempts. Then the next closest was Kurt Warner in 2000 against the Chargers with 30 attempts, which is definitely great company to be in. Throughout this game we saw him make incredible throws all over the field as he found receiver after receiver for first downs. Goff is showing game after game that he is a franchise quarterback and he belongs in the conversation as a top 10 QB in this league. yet, another question has been brought up by some of the Rams media members. Could these last few games of Goff make him a MVP candidate? Only time will tell as the season goes on but this is definitely a great start to that possibility.