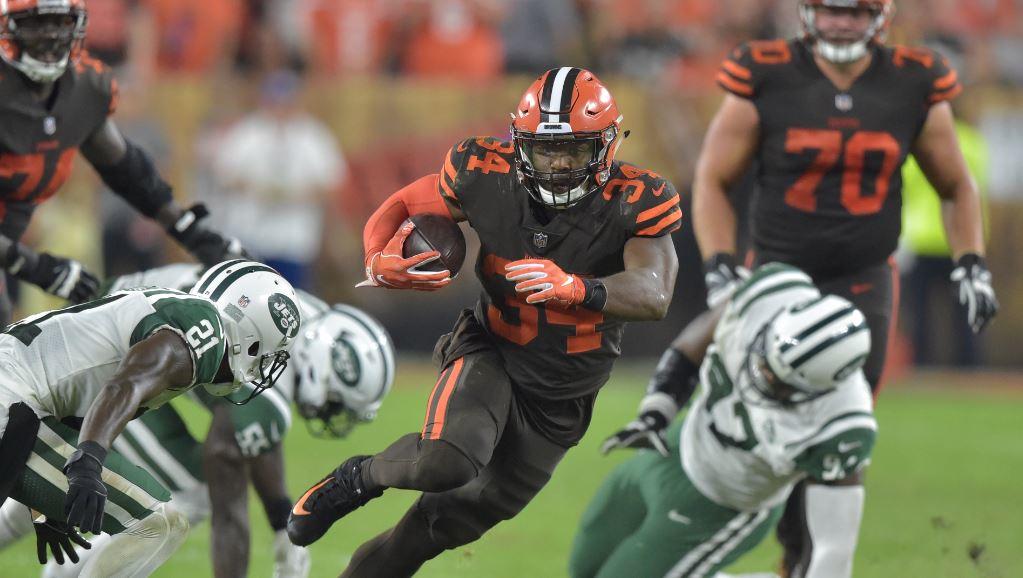 The 49ers made a mistake in trading away this three down running back that does it all. This last week we saw Hyde take the backfield over and have a big 2 touchdown performance with 98 yards rushing. Look for this number to continue as the Browns will look to feed Hyde to keep the pressure off of Mayfield in his first NFL start. Hyde also plays against the 22nd ranked run defense in the Raiders and will look to break the 100 yard mark and continue his streak of having a touchdown in every week this year.

In previous articles we listed Johnson as a sleeper candidate but this week he is a starter. Last weeks performance was the first time in a long while that a lions RB ran for over 100 yards rushing in a game. Johnson got the bulk of the carries with 16 carries but with no score against the Patriots. Look for him to finally get that score this week as he takes on the 11th ranked rush defense in Dallas and increase his rushing attempts. Dallas has the 4th ranked passing defense so look for the Lions to use him often and early to get the ball moving.

Just when you thought the Chargers couldn’t possibly add another weapon to their offense they get a surprise in a healthy Mike Williams. Williams put up two scores last week against one of the best defenses in the LA Rams. His receptions may not jump out at you but this is obviously Rivers favorite target when they get close to scoring range. Williams is a big receiver and uses his body well to get the better matchup and look for him to do the same against the Niners. The Niners come into this week with most of their starting defense out with injury which only makes their 27th ranked passing defense even more enticing for Rivers and Williams. Play Williams this week with confidence as the Chargers will score early and often.

Dalton currently sits as the 11th best fantasy QB as he has a very underrated start to the NFL season. He is putting up at a minimum of 20 fantasy points a game as he has the Bengals at a 2 and 1 start to the season. Dalton is also putting up over 240 yards passing a game and at least 2 scores. This week he has another easy chance at more success and he plays against a Falcons defense with their top 3 defensive players out for the season. Let this be the week that Dalton takes advantage of the Falcons loss as he plays the best fantasy outing yet. Falcons are currently sitting as the 26th ranked passing offense so look for them to make mistakes and let Dalton rip the ball to Boyd and Green for multiple scores. Definitely a must start this week with some NFL teams bye weeks starting.

Rivers has been quietly having a great year by only throwing one interception and 906 yards passing. Not to mention he’s thrown at least 2 touchdowns a game. This is a hot QB with a high scoring offense that is gonna get you points this week and further on. Rivers plays against a beat up 49ers secondary that may be missing Sherman, their best Corner. Not to mention they were already ranked the 27th passing defense with all their starters. Look for Rivers to take advantage and have a big fantasy outing against a defense that is pieced together with duct tape.

Cousins was listed as the start of the week last week against a poor Bills defense that turned out to put up more of a fight than anyone thought. This week is a whole new animal as Cousins looks to throw against the 6th best passing defense in the LA Rams. This will be Cousins biggest challenge yet as his he looks to stay upright from a relentless pass rush in Donald and Suh. Not to mention that Peters appears to be playing this Thursday and will most likely be covering one of his favorite targets in Diggs. Sit Cousins this week to avoid a let down as this Rams defense has only given up just under 600 passing yards total this year.

This Titans offense has been struggling so far this season and Lewis has not been able to find running room because of it. Whatever QB the Titans have put on the field has not performed well and is making the rest of the team suffer. Look to sit Lewis this week until we see this Titans offense get back on track. Don’t forget that they play against the Eagles and their formidable defensive line. With the Eagles leading the NFL with the best rush defense it just spells trouble for any Titans running back. Sit Lewis this week and start any other running back available on your roster.

Sit Agholor this week as he goes up against the Titans and their 10th ranked passing defense. Agholor is usually Wentz’s favorite target but in the one week with Wentz at the helm he was limited to only 4 receptions for 24 yards. Not the best stat line and most likely will keep this same outing as they travel to Tennessee and their 10th ranked passing defense.

It’s finally time to jump off the Kittle train as he goes against a talented Chargers defense. Lets not forget that the 49ers starting QB just tore his ACL and will not be returning this year. This completely ruins his value and he should be sat if not dropped in any fantasy league. Even with the Chargers having the 25th ranked passing defense don’t expect this to continue as they always start the year off slow.

Quietly the Browns are ranked the 4th best fantasy scoring defense. Look for them to put up more points for your fantasy team this week as they play against a lackluster Raiders offense. Suprisingly the Browns defense is only owned in 51% of fantasy leagues, so look to add them this week as a plug and play.

Flacco has been under the radar for most fantasy owners this year and is only owned in 11% of fantasy teams. Flacco is averaging over 17 fantasy points over the last 3 weeks and is putting on a show with his new toys at WR. Look for him to continue against the 28th ranked passing defense in the Steelers this week. Even though this is a divisional game and these teams always play well against each other. It seems like this isn’t the same Steelers defense we are used to. Expect Flacco and his offense to roll through the Steelers and put up good fantasy points.

If you thought this WR was putting up good number so far this year then you are about to see an explosion this week. Landry now has Mayfield throwing him the ball and against a poor Raiders defense that has allowed the 19th highest passing yardage. Look for Mayfield to target Landry early and often to give him his best fantasy outing yet. If you don’t have him on your fantasy team now is the time to trade for him before Sunday hits. Get him on your team before his price tag becomes too high.

If you have him on your team you may already have started to receive offers for this talented WR. If you don’t have him then why aren’t you trying to obtain him? Golladay is currently the 11th best WR in most PPR leagues and right now it is the best time to trade for him. He has a challenge this week against the 4th best passing defense in Dallas, but after this week the schedule gets promising. Trade for him now as he has become a reliable target for Stafford in his pass heavy offense.

There is a reason that Luck was removed from the game last week against the Eagles. Look to trade him away, it appears that his shoulder is still hindering his throwing ability. This is not the same Luck we are used to seeing where he can stretch the field. Until we see a fully healthy Luck again stay away from this QB and look to trade him off to anyone that is willing to take him off your hands.

Nelson had a big outing against the Dolphins last week with 6 receptions for 173 yards and a score. Unfortunately, this might be the only big outing we will see from Green Bay as this Raiders offense looks confused and desperate under Jon Gruden. This week the Raiders play against a 12th ranked passing defense in the Browns. Don’t sleep on this Browns team, because they have kept every offense to almost half the scoring average they have against other teams. This is not Nelson’s week and is the perfect time to trade him away after a hot performance.

LA Rams vs. Minnesota Vikings: Revenge of the Rams