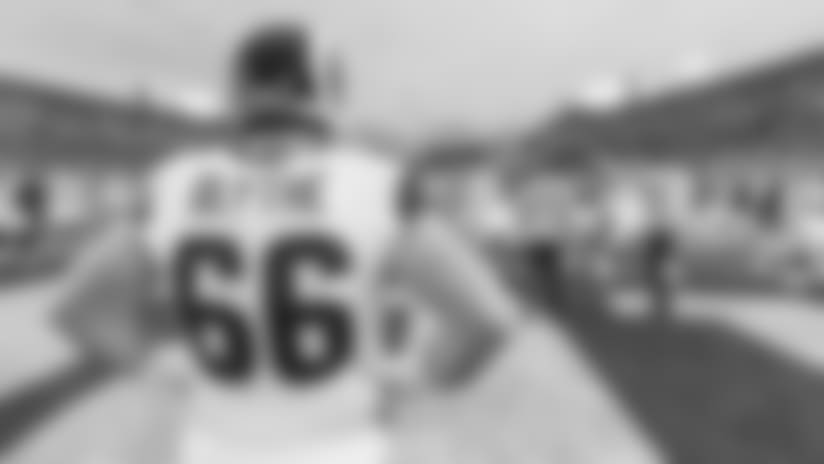 With the recent roster moves leading to the LA Rams recalling the suspended Right Guard Jamon Brown up to the active roster there is now the question of who starts at the position for the remainder of the year.

Jamon had a solid year last year and was essential in the Rams turning around one of their weakest positions into one of their strongest. It showed on the scoreboard as well as the Ram’s offense went from ranked dead last in 2016 to outright first in 2017.

Many were worried that Austin Blythe who was given the opportunity to fill in while Jamon Brown served a two match suspension for substance abuse would struggle and the offensive-line would regress from last year.

The opposite has happened and Blythe has revelled in his limited opportunities and now coaching staff have a legitimate question on their hand as to who starts at Right Guard for the remainder of the year. Coach McVay was coy when quizzed in his press conference following training stating that he was lucky enough to have two starting calibre Guards on the roster in reference to both Brown and Blythe.

To help you, the dedicated fan, to understand both these young men and try and decide who you think McVay should select I have put together a rundown of each of them based of their background and game experience in this special edition; Roster Battle. 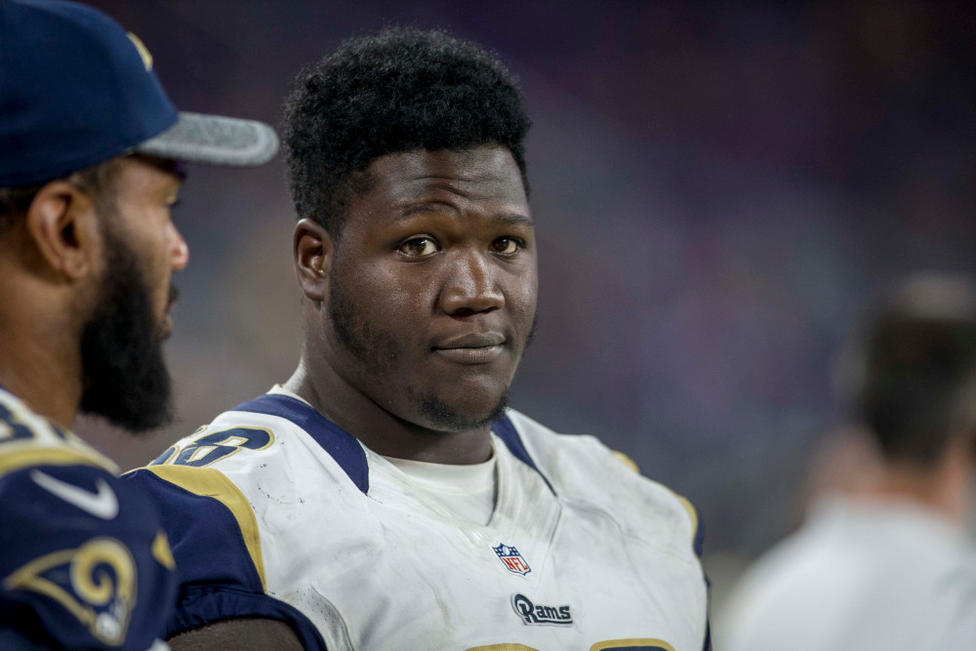 The 25 year old lineman is from Louisville, Kentucky and chose to stay local for his collegiate career and played for the Louisville Cardinals.

Brown played four seasons with the Cardinals from 2011 through to 2014. He was able to play both Left and Right tackle, playing the majority on the left side and finishing his Senior year in 2014 with only 2 sacks allowed from 13 games and was selected to the Second-team All-ACC.

Entering the 2015 NFL draft Brown was given a 5.43 grade from nfl.com draft tracker. He was a projected round 4 or 5 prospect.

Brown did not attend the NFL Combine but his measurables were instead provided via his Pro Day, noting that he did not perform the bench press despite being a touted power lifter in High School.

All values from his Pro Day

With the 72nd overall selection, in the third round, the then St Louis Rams selected Jamon Brown in what most critics described as a possible reach at the time. But given that the Rams selected Todd Gurley in the first round they were committed to providing him with enough big bodies upfront to open holes for him in a power-scheme and Brown was one of four lineman selected by the Fisher/Snead combination. The other lineman selected were Rob Havenstein, Andrew Donnal, and Cody Winchman.

Interestingly enough big Rob and Jamon are the only two left on the active roster in 2018.

Brown’s rookie season did not go as planned after ending on the Injured Reserve list with a fractured leg half way through the season.

It was safe to say that the offensive line struggles are well documented in 2016 and Jamon Brown has to take his fair share of the blame for that.

Last year the Ram’s Offensive Line turned it around but all is not as it seems. Per Pro Football Focus (subscription required) Jamon Brown struggled and only produced a PFF grade of 52.1 which ranks him 38th amongst players at the positon.

Add to that now an arrest and a suspension there are serious questions over whether or not Jamon Brown, in his last year of his rookie deal, deserves to be the starter going forward and whether or not he even remains a Ram. 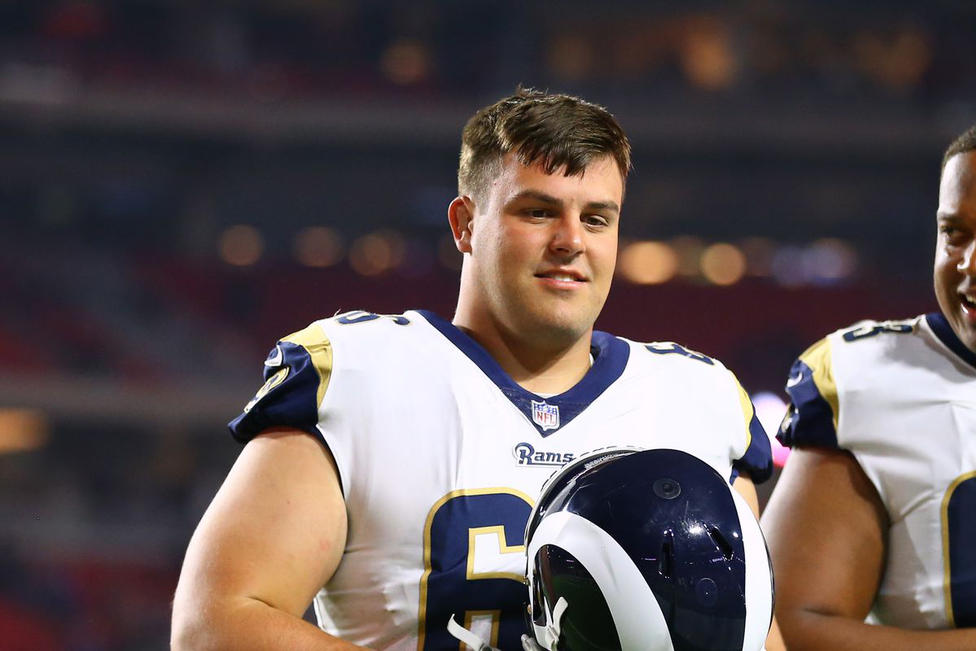 Austin Blythe is 26, a year older that Jamon and is from Williamsburg, Iowa. Austin also chose to stay local for his collegiate career and played as a four year starter with the Iowa Hawkeyes.

During his 52 collegiate games Austin moved from Guard to Center. He was a Team Captain and was touted for his versatility and consistency. He was recognised for his hard work in his Senior year, a year which included a Hawkeyes trip to the Rose Bowl, by being nominated as a finalist for the Rimington Award which is annually given to the nation’s top Center.

Coming into the 2016 NFL Draft Blythe’s biggest critism was that he was undersized to play in the NFL. He was projected as a 6th to 7th round pick by nfl.com draft tracker.

All values from NFL Combine

Blythe was selected in the 7th round, 248th overall pick, by the Indianapolis Colts. In his rookie year he played primary as the backup Center and played in 8 games with only the singular start.

After being waived by the Colts the LA Rams swooped to pickup Austin in early 2017. Blythe impressed new offensive line coach Aaron Kromer so much that he played in all 17 games in a rotational role but also including a start in the final game of the year against 49ers when the starters were rested ahead of the playoffs.

When the news broke that Jamon Brown had been suspended coach Kromer addressed the media and proclaimed his faith in Blythe to fill in the breach. He was quoted “We have the ultimate confidence in Austin Blythe”.

It seems that Kromer’s confidence was not misplaced as Blythe was Pro Football Focus’ top graded Right Guard in week one against the Oakland Raiders and was outstanding last week against the Cardinals. One play that sticks out in my mind was the goal-line charge for Gurley to walk through where Blythe cleared a gaping hole.

Jamon Brown is a man mountain. Coming in at 6ft 4in and weighing a whopping 340lb he is a much larger blocker Austin Blythe who is 6ft 3in and only 300lb. But we all know that size alone does not make a player.

Brown’s struggles on and off the field have created the opportunity for Blythe to step in and play. Coming into 2018 Brown was already labelled as the weak link of the offensive line so rather than getting himself arrested should have been spending the off-season hitting the gym rather than blazing it up.

In Brown’s defense, Blythe has not encountered a star-studded pass rush as yet. Oakland and Arizona do not look they will terrorize too many Quarterbacks this year so far. Bigger tests are coming though with the LA Chargers and Minnesota Vikings coming up who present a much more daunting task.

Regardless I believe that Austin has earnt his right to test himself against the upcoming defenses and prove that he could win this job once and for all. Brown has had three seasons to prove his worth and has yet to set the world alight like Austin has in his limited opportunities.

If Blythe can come out and put his name permanently next to the #1 Right Guard position on the depth chart and the Rams are not looking to extend Brown hen he becomes the prime candidate for a mid-season trade.