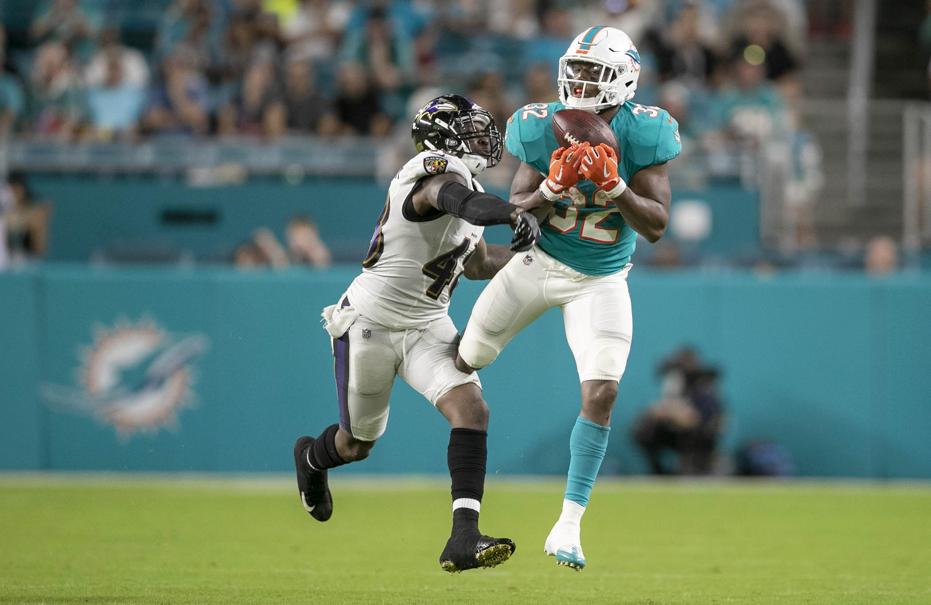 Golladay has become a fantasy stud in this new look Lions team under Matt Patricia. He has averaged 6 catches in his last two contest and look for him to increase that this week against the Patriots. New England currently sits as the 10th best defense but their corner depth with keep them from containing Golladay. Expect him to have a big day as the Patriots corners will have their hands full with Tate and Jones.

Tannehill may be a deep sleeper for everyone reading this but don’t laugh just yet. He may be only owned by 7% of fantasy teams except this week that will all change. Tannehill faces a poor Raiders defense where they gave up over 450 combined yards through the air and will give up even more this week. Raiders are also the 22nd ranked defense and give up an average of 26.5 points a game. Play Tannehill this week as a matchup plug and play if you don’t have a solid starter or need a boom or bust candidate.

The receptions may not reflect how much he means to the Baltimore offense but the yardage and scores do. Brown was a bust in Arizona but here in Baltimore he is Flacco’s deep threat as he torches defenses. Brown should continue to keep this pace as he plays against Denver and their above average defense. The Broncos  allow a 73.8% completion rating to quarterbacks which means lot of looks for this receiver. Pick him up as he is only owned in only 53% of fantasy leagues.

Big sleeper here this week as this receiver faces a very exposed Steelers defense. This defense currently allows the 4th most points to opposing offenses and over 236 passing yards a game. If you have a flex spot that needs filled this may be the player for you. Fitz Magic is also in full effect as he has played some of his best football and it doesn’t look like it’s stopping anytime soon. Pick up Godwin as he looks to continue his impact in this Tampa offense.

Ekeler has increased his role in this Chargers offense as he has scored over 12 PPR points a game in both weeks. If you need a flex or have an extra slot this week look to add this dynamic player as he is only owned in 55% of fantasy leagues. Grab him now before he gets too hot because this Chargers team always starts the season off slow. Having this guy on your roster is a must for any PPR league. Even with this weeks matchup against the LA Rams he will make noise as the Rams will be facing their first good offense of the year.

Lindsey is currently 3rd in rushing yards in the NFL with 178 yards, as a rookie! Broncos head coach Vance Joseph said this team will ride the hot hand and this rookie is as hot as they come. Lindsay goes up against a Ravens defense that has shown it can give up decent yardage to runnningbacks. In the last two weeks they have given up an average of 95.5 yards on the ground. Expect Lindsay to stay hot against this defense as he rushes for close too 100 yards and his first rushing score.

Agholor has been a stud in fantasy with Foles under center the past two weeks. Thankfully for fantasy owners it can only get better from here as Carson Went returns from injury this week. This whole offense for the Eagles is about to get a boost as their MVP candidate QB looks to pick up where he left off. Already averaging 8 receptions a game is a huge plus for any PPR league and now he can get the yardage most fantasy teams have been waiting for. Start him this week in Went return to the offense.

Enunwa has emerged as Darnolds favorite target as he averages six receptions per game. Going against an average defense in the Browns will only help his value as he looks to break the 100 yard mark for the first time this season. The Browns have young corners playing and they will have their hands full as Enunwa looks to use his veteran experience to get open. Start him this week as Cleveland gives up over 260 yards a game through the air.

Drake is a must start the week as he plays against a terrible Oakland defense that allows 154 rushing yards a game. Even if you have to put him in your slot spot for this week you have to trust he will see most of the snaps against an easy defense. Oakland also gives up 26.5 points a game so expect Drake to see some goal line carries and have a big week.

Cousins is definitely the start of the week as he plays against one of the worst teams in football in the Buffalo Bills. This defense has given up an average of 39 points a game and over 260 passing yards. Cousins will have the game of his life with all the talent he has around him in Thielen, Diggs, and Treadwell. Also consider that rookie Josh Allen will make plenty of mistakes against this stacked Minnesota defense. This allows for Cousins and his offense to stay on the field more and give plenty of opportunity for him to score. Play Cousins this week to establish dominance in your fantasy league and reap rewards.

Keenum is owned in about 31% of fantasy leagues as of today. Most ten to twelve man leagues are looking for a sneaky pick to play on a week to week basis. This QB is not that pick for this week as he goes up against a strong secondary in the Baltimore Ravens. Currently the Ravens sit as the 30th ranked defense as of Week 2. Don’t let that fool you because they allow the lowest completion percentage with 46.7%. With Keenum also as a turnover machine in the last 2 games with 4 interceptions, it’s best to stay away from him this week and look elsewhere.

Davis may be the number one target on this Titans team but he faces a strong foe this week in the Jaguars. This defense hosts two of the best corners in the league and they aren’t going give up yards. Don’t let them fool you with their current position as the 24th ranked defense. This defense can shut you down any day of the week. Sit Davis this week in hopes of better days.

Most of you are wondering why a number one wide receiver is sitting here on the sit list this week. The answer is pretty clear, Crabtree will be guarded by the Broncos best corner in Harris Jr. Since he will be locked up the whole game, this will open up the rest of Baltimore’s receivers to get more receptions and leave Crabtree with the scraps. Crabtree still has the chance to put up points in this matchup since Denver gives up an average of 261.5 passing yards a game. Unfortunately this matchup is not the one you will want to risk as there are other receivers on the Ravens that will have a big day because of the attention he will get.

Sit Freeman this week as he appears to have taken the backseat in this running back rotation. Lindsey has been the hot hand and will garnish more touches from Freeman. Don’t risk starting him this week as he also looses out on passing downs to Lindsey as well. Hopefully he picks up the pace in coming weeks but as of now your stuck with another sticky running back rotation.