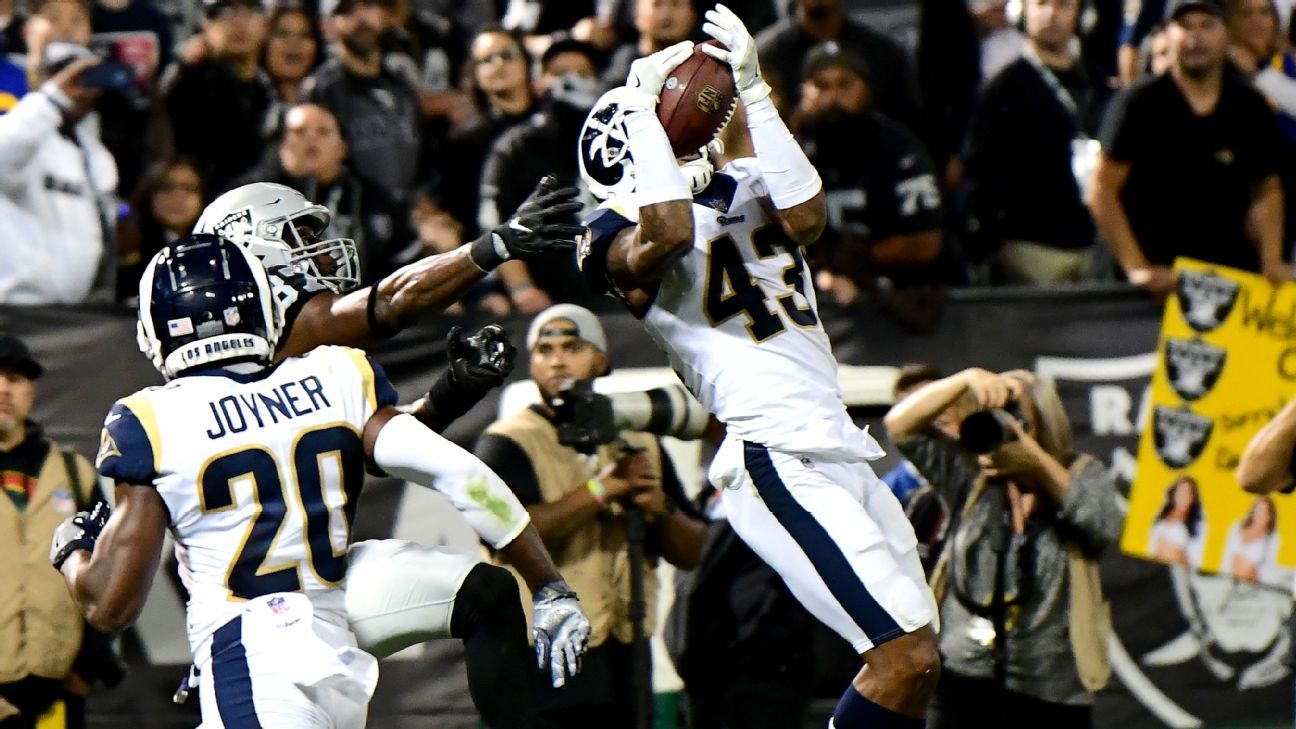 General Manager Les Snead and Head Coach Sean McVay found a way to add three superstars to the defense in the offseason with Aqib Talib, Ndamukong Suh and Marcus Peters. There is always questions surrounding teams who made offseason additions and what impact that will actually make when Sunday comes. After week one, one can’t help but think this Rams defense is as advertised.

The first drive for the defense was a bit rough. The drive went 7 plays for 75 yards with 3 plays 10 yards or more. The first big play was a 20 yard pass to Jared cook – who went on to tear up this defense (more on that later). Amari Cooper had an 11 yard end around rush that got the Raiders on the Rams 21 yard line. To cap off the drive, the offensive line help Marshawn Lynch finish with a 10 yard touchdown run.

Definitely not the first drive you’d expect from this Rams Defense. Fortunately, this was the worst things would get for the Rams defense. On the second drive, Samson Ebukam came up with a great stop tackling Doug Martin in the open field behind the line of scrimmage. This play kept the Raiders at 3rd and very long (21 to be exact). The play was a big momentum boost for the Rams in general, as the Rams were able to match the Raiders first score after the Raiders were forced to punt from their own endzone.

In the second half the defense only got better. The Raiders offense was not on the field longer than 2 min 11 sec the entire half. Their longest drive in the second half was in garbage time, the final drive of the game for 52 yards. This last drive was the third longest drive for the Raiders, their longest two drives came in the first half. The Rams defense averaged 1 minute and 40 seconds per drive in second half compared to 4 minutes and 18 seconds per drive in the first half.

The linebacker core is the weakest spot on this defense and that is only because the players at line backer are young and unproven. Cory Littleton, who has played in every game for the Rams the past two seasons, was all over the field with 13 total sacks (11 solo), which was a team best. He also Got a little lucky with an interception on an errant throw from Carr. Samson Ebukam had a quietly good night. As I mentioned earlier, that tackle he made on the Raiders 2nd drive was really a huge play, though it was on 2nd and 20.

The way this team was able to make adjustments after halftime is what makes this team so scary, as they shut out the Raiders in the second half. They were overmatched when they put one or two defensive backs covering Jared Cook, the raiders tight end, but John Johnson III was able to take advantage of that matchup on a pivotal drive that could have ended up in points for the Raiders but instead ended up with the ball in Johnson’s hands. If the Rams have to force every team’s tight end to beat them – like the Gronk’s and the Cook’s of the NFL world – so be it. They have such great talent on the defensive line and on the outside that this defense will cause you to make a mistake sooner or later. I had my doubts about how well this Rams defense would gel and perform. It’s safe to say, after this first outing, I can see this team doing some real damage – I see this Rams defense making their make in the history books this year.

The Good, the Scary and the Gurley: Rams Vs. Cardinals