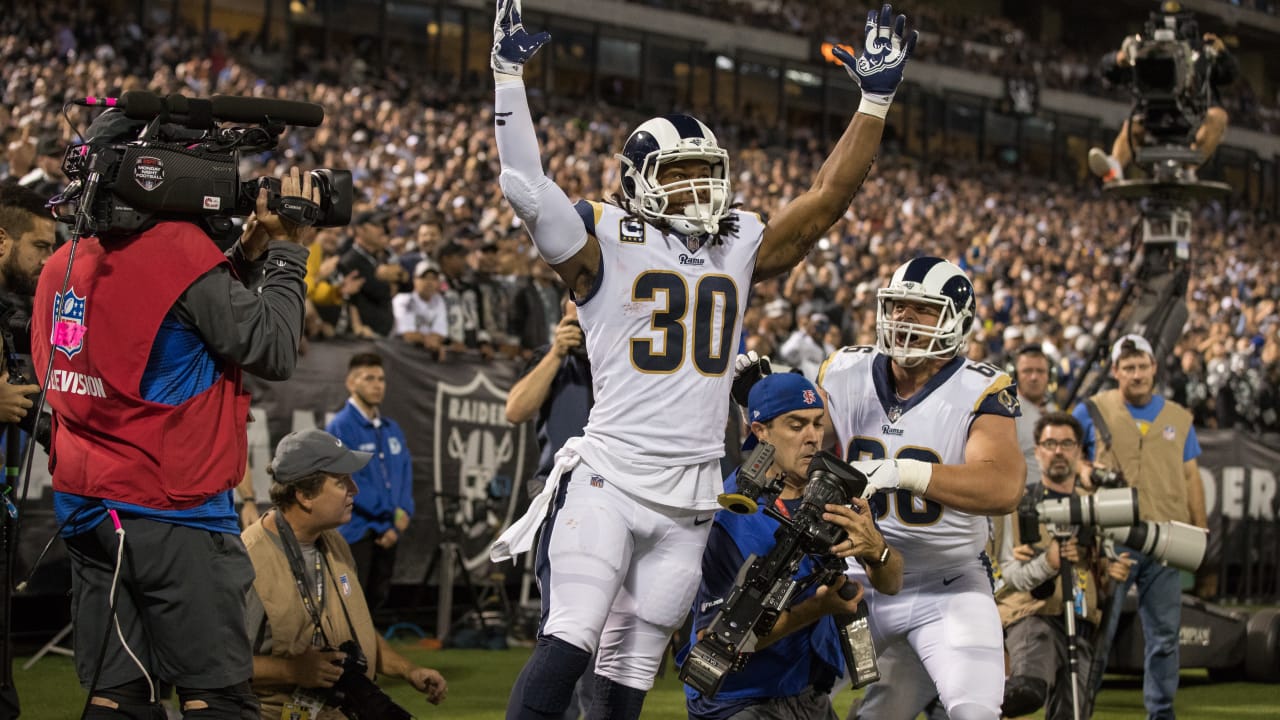 Week 1 brings a teacher vs student matchup between Raiders Head Coach Jon Gruden and Rams Head Coach Sean McVay. It’s been a long time since Gruden coached in the NFL and everyone was watching as the Black Hole looked to take down the LA Rams without their ex-pass rusher Khalil Mack. This matchup ended in the Rams taking control with a nice 33-13 win on the road. The question is, how did the Rams do during their first NFL game of the 2018 season?

During the first drive of the we see the Rams playbook open up more than last year. Brandin Cooks, early in the drive, got a sweep play to gain some yardage. Exciting for Rams fans to see what this offense will bring in the next coming weeks. The rest of the drive was not so pretty considering they didn’t get a first down. On third down Jared Goff throws to Cooks for what would have been a first down, if not for the obvious defensive pass interference that wasn’t called, leading to a 4th down and a punt.

Second drive of the game we start to see the Rams move down the field into scoring
position. During this drive we see Kupp with an early concentration drop, something Rams were hoping to minimize on from last year. Later in the drive Gurley gets a little pitch play to get the edge and score the Rams first touchdown of the game. Finally the first touchdown of the season out of the way and hopefully taking some pressure off the offense.

Third drive of the game comes in the second quarter where the Rams get a PI early on Cooks to set them up in Oakland territory. As the drive continues we see more sweep plays, this time from receiver Kupp to get a first down. Rams starting to really open up the playbook and give the NFL a bunch of new looks and plays to prepare for on game day. Unfortunately on third down in the rezone, Goff holds the ball for too long as Bruce Irvin hits him and causes the fumble. Rams end up getting the fumble recovered and, to make things worse, miss a field goal. McVay was looking frustrated by the offensive performance early in this game.

Fourth drive of the game comes from a huge interception from safety John Johnson in the redzone and gets the Rams life again after that missed field goal. Gurley then gets a nice run to get a first down. Another easy PI called on Cooks on a deep pass play that now sets the Rams up in the red zone. Another handoff to Kupp, still keeping the sweep plays alive as they keep up the mixup of running plays from multiple positions. Goff later makes a dangerous pass in the rezone that is almost intercepted and misses Woods low on the right side to set up 4th down. Greg the leg makes a 20 yard field goal and caps off this drive.

Rams start with the ball to begin the start of the second half and get right to work with the run game. Gurley takes a nice zone run for 15 yards and a first down to set up a nice jet motion play for Cook and another first down. As the second half goes on Woods is utilized even more on the offense as the motion-man for Goff to read the defense. Goff then throws another low pass on 3rd down in the red zone and has it almost picked off. Greg the Leg then ties the game up at 13 with a field goal.

Rams get right back to the run game to start the 2nd drive of the half, trying  to get Gurley more involved. Unfortunately, a big holding penalty by John Sullivan sets them back to 3rd and 15, Rams have to punt.

On the 3rd drive of the half the Rams send two play action passes to Cooks early each for first downs, setting the tempo for this drive. Setting up another play action pass and send it to Kupp for the touchdown!

Los Angeles went right for the big plays by sending two screen passes to Gurley to start the fourth drive of the half. Later on third down within Raider’s territory, the black hole comes up with a huge pass deflection at the line of scrimmage and send the Rams to fourth down.

Greg answers with a huge 55 yard field goal to put the Rams up even more.

Huge interception by camp favorite Cory Littleton sets up the Rams on their own 30 to start the 5th drive of half. Gurley then takes off with a 23 yard run to bring them into Oakland territory. Rams come up short though at the Goal line and end their last drive of the game with a 20 yard field goal by Legatron.

The Rams take home their first win on the season with a strong second half effort by the defense. Littleton had a wobbly pass from Carr fall into his arms as he gave the Rams their second interception of the game. Peters also had a great interception late in the fourth quarter for a touchdown to seal the game. The offense came out heavy on the passing game to start and worked in the run as halftime adjustments were made. There was lots of movement with Woods early as they used him in motion most of the game to show Goff what coverage the defense was giving him. Plenty of play action passes set up great field position for the Rams to get into scoring position. Goff looked nervous when he got into the red zone as he missed receivers with some questionable passes that were low and almost intercepted. Gurley came back strong in the second half as the offense looked to make him work for the contract he received earlier this offseason. Rams definitely have to start off the next game strong and look to getting Gurley going early if they want to keep teams chasing them before halftime. Great win for this team but plenty to work on before they can live up to that, Super Bowl favorite, hype.