The Los Angeles Rams opened up their 2018 Superbowl campaign with a 33-13 win over the Oakland Raiders. It was a game of coaching adjustments where the Ram’s staff got the advantage and ran away with it in an exciting second half.

During the game Goff continued to live up to his billing with 18 completed passes for 233 yards and two touchdowns. Gurley as well revelled under the Monday Night Primetime with 20 carries for 108 yards on the ground combined with 39 yards through the air and a touchdown. Talib, Suh, Donald, Brockers and Peters who had an amazing pick-six where he jumped the receiver’s route late in the fourth quarter to seal the victory are all well established players and are expected to play well.

But Monday night’s victory had some surprise standout performers and I go through three of them below; 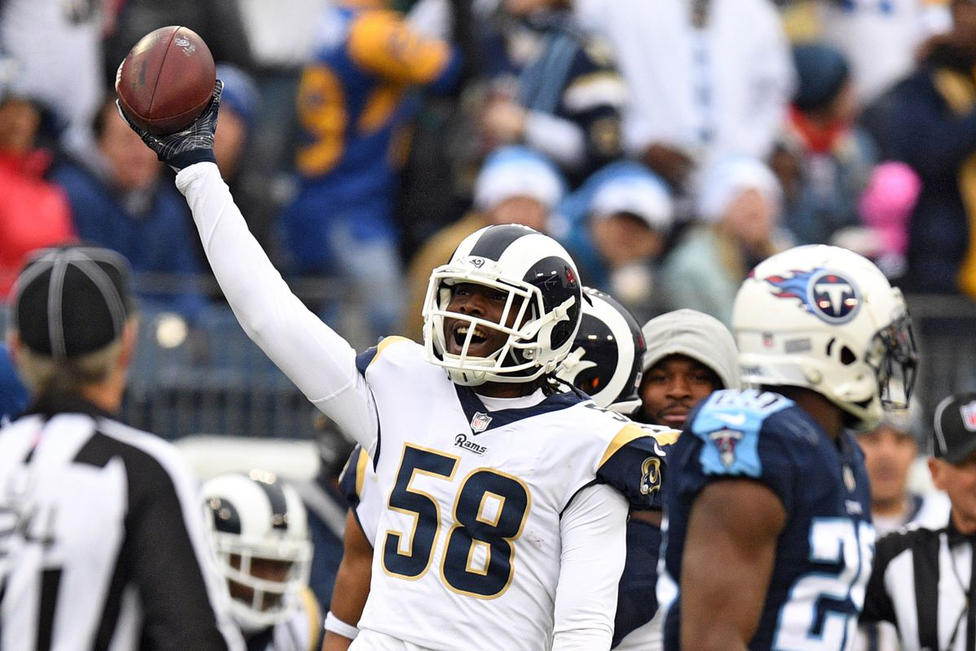 The undrafted free agent in his third season has mainly been a Ram’s special teams specialist and rotational player. After making impressions last year whether it be on the field in his limited opportunities or through practice the coaching staff had enough confidence in the 24 year old to trade away former first round pick Alec Ogletree to the New York Giants in a move that had some people scratching their heads.

Littleton moved up into the #1 ILB spot on the official depth chart and most NFL experts around the league had the Ram’s addressing the Linebacker position either through free agency or in the draft. Micah Kiser and Ramik Wilson (who started next to Littleton this week) came in to provide competition and depth but ultimately Cory Littleton continued to impress so much that he was given the nod to start the season at the MIKE position, ultimately being trusted to be the quarterback of the defense and call plays and adjustments on the field.

The Raiders obviously looked at the middle section of the field as an area of weakness in which they could exploit and made the Linebacker group earn their pay.

Cory Littleton, wearing the #58 on his back was everywhere. Making tackles from sideline to sideline, shedding blockers and even dropping back in coverage he topped the tackle count with 11 tackles and 2 assists, 3 more tackles than his closest defender on the stat sheet.

Being in charge of the second half adjustment didn’t seem to faze the new found leader of our defense as he handled the play calling duties seamlessly and relayed the Wade Phillips’ message to the team and executed to a high level.

So impressive was the new starting ILB that the Oakland Quarterback that it was fitting that he reward him with an interception. Jokes aside, it was the world’s easiest interception and for those that didn’t catch the game Derek Carr attempted to throw the ball in the direction of a receiver when under pressure but didn’t see the crafty Littleton who had dropped into coverage underneath his intended receiver. The ball lolli-popped up and sailed right into his numbers. Horrible Quarterback play but our man had to be there and still had to catch it. 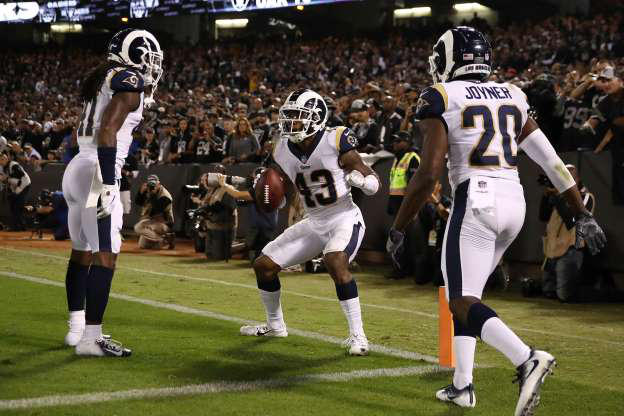 This off-season the bright lights of Hollywood’s best NFL team have been focused on the new acquisitions of Aqib Talib and Marcus Peters. Expectation has been heaped upon Lamarcus Joyner now that he is playing under the team’s Franchise Tag and even veteran backs Robey-Coleman and Shields have garnered some level of attention as media continue to refer to this talented defensive back corp.

Quietly working away through all of this is second year Strong Safety out of Boston College; John Jonhson III.

After a surprisingly good rookie year where he won the starting job the 6 ft, 209 lb expectations were tempered for Johnson but that’s not to say that there wasn’t some air of excitement on what his potential could be.

Monday night against the Raiders, on one of the first plays of the night former Ram Jared Cook slices up the middle for a 45 yard gain. The yardage leads to great field position and the home team eventually score a touchdown on the first drive of the game to put the Rams down a score.

From that point on Johnson was appointed to make Cook’s night difficult. Wade Phillips opting to put Johnson into a man coverage press situation making it difficult for Carr to find his big Tight End target.

Johnson helped in the run defense game as well coming up multiple times to fill a running lane with good timing and efficiency.

But it is with no doubt the play of the game and possibly the turning point of the game was the first interception for the ‘Lock Angeles’ of the 2018 season where John Johnson simply out muscled Jared Cook within the end zone to blanket cover him and come away with a spectacular interception.

It was a great moment in the game and a great moment for Johnson to announce to everyone that he won’t be the quite achiever in an extremely talented defensive backfield. 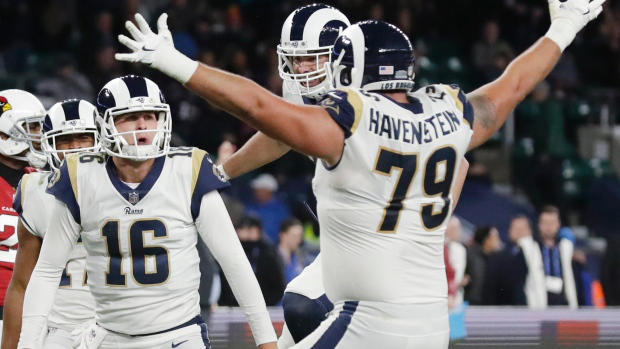 Much has been made about the age and depth, or lack thereof, of the Ram’s Offensive Line and for the first test of the season the buffet boys up front were the star of the show.

In a sport where it’s easy to ball watch you sometimes miss the subtly of the big boys up front but led by the ageless Whitworth in Monday Night Primetime it was an absolute clinic.

With Jamon Brown serving a two match suspension Austin Blythe was asked to fill the breach and did so more than admirably. He won’t be pushing Brown for his starting spot but it’s nice to know that the depth can handle some snaps when required.

Goff seemed to have an age to choose a receiver. At times I would stop and think to myself that there should be a rusher coming soon but again the line would corral the defender away from #16.

Gaping holes were opened for Gurley at times who took full advantage and punished the Raiders ripping off nice runs or collecting first downs.

Whitworth, Saffold, Sullivan, Blythe and big Rob played all 63 snaps in 100% of the Offense in what was ultimately a match winning performance. Without them the Rams would not have mounted their second half revival.

I know that there will be people who will say that Oakland didn’t have Khalil Mack but you can only beat who is put in front of you. The O-line did that and that is why McVay was happy to hand them the match-ball and I am inclined to agree.