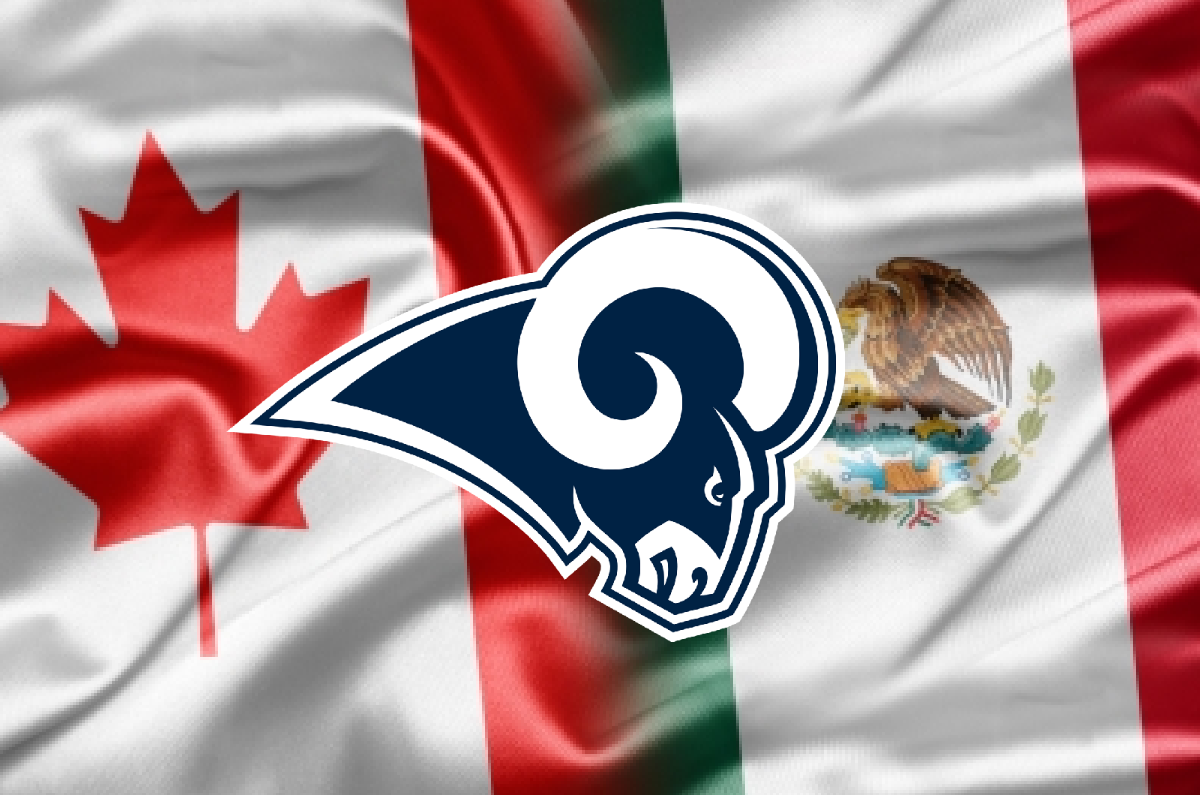 The the season opener is almost here! Let’s keep our minds occupied with another edition of the International Rams fan series.

If you’re just tuning in:

This is the third installment of the International Rams fan Q&A. In this edition we will be taking a look at our North American brothers from Canada and Mexico.

Although only two submissions were received from Mexico, later this season when the Rams play the Kansas City Chiefs in Mexico City, Rams fans will get a front-row seat to a rapidly growing and already gigantic audience. During that time I also look forward to the Rams profiling and sharing lots of content of our Ramilia in Mexico.

The most important aspect of this series was acknowledgment of our foreign friends and to hopefully give them a platform to reach out and network with more Rams fans in the world. As this series progresses and because I have detailed many of the aspects of international fandom, I would like to share the contributors own words in volume.

How did you become a Rams fan?

The first football video game I ever played was a beta of some football game. It only had two teams to choose from: the Rams and the Titans. Me being younger than my brother, I got the better team (Rams) and he’d play with the Titans. I recall having a tough time trying to stop Eddie George. On top of that, the first time I ever recall seeing American football was the Rams’ gold jerseys. I instantly fell in love. Sosa

My Dad was a rams fan dating back to the 70s. I was born into it and have loved the team ever since. Nirmal

Growing up in Edmonton we usually got the same teams on TV. Dallas, Seattle, San Francisco and Detroit. I never had a connection with those teams when I watched. In grade 8, I got Madden 99 when it came out and picked a team at random to play with. That team ended up being the St Louis Rams. I enjoyed playing with Faulk, Holt, Bruce and Warner on offense because I could dominate. I followed them that season and remember watching their post season games on TV and just fell in love them. I’m 31 years old now and cheering for them has been painful at times, but I’ve never wavered or quit on this team. Trevor

It is a family tradition, passed down from my uncle Gonzalo from Veracruz, Mexico. Miguel

Who is your all-time favorite Ram?

Who is your favorite Ram currently on the team?

Have you ever attended a live game?

In the US, twice: TNF Rams at 49ers at Levis’ Stadium and Dolphins at Jets in NJ. In Mexico I have attended all three plus American Bowls. Omar 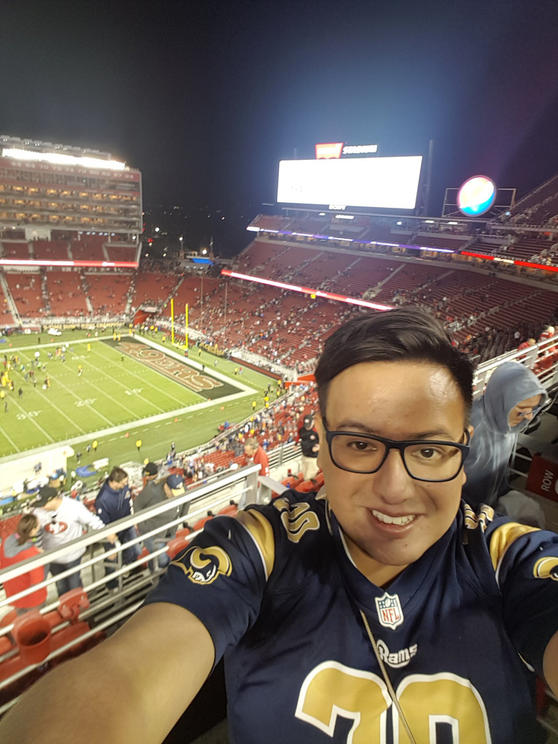 Not Yet but I would like attend soon. Miguel

I have not. Sosa

Rams vs 49ers game in San Francisco, we won when Kaepernick fumbled on the goal line. Nirmal

I drove 18 hours straight from Regina Canada to Green Bay with my buddy who is a Packers fan to catch both of our first NFL game. Rams vs Packers Oct 15, 2011, Packers won 24-3. 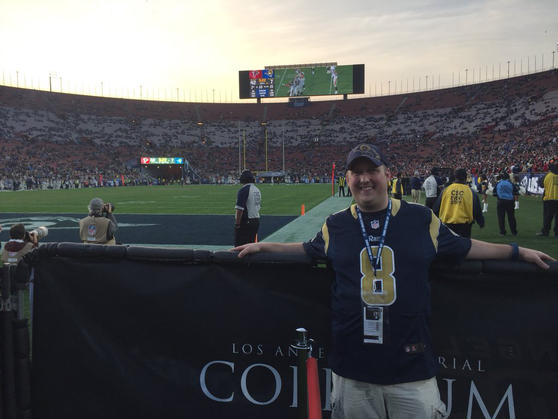 I then made my in laws plan a scheduled family trip to Disneyland around the Rams schedule. Went to Atlanta vs Rams in the Coliseum on December 11,2016 when Atlanta won 42-14 in Jeff Fisher’s final game as head coach. Trevor

Nothing, really. I get up and try to kill the time, which takes absolutely forever, usually setting my fantasy lineups and stuff. I generally plop down on the couch at 1 p.m. and sit there until midnight when the games are all over. Sosa

I wake up nervous as hell and watch the game with my dad. Nirmal

I used to hang out in the basement alone with some snacks and a couple beers to watch the game in peace so I could yell and just be left alone. I got married 5 years ago and my wife started taking an interest when we drafted Goff. I also have a 3 year old son and a 1 year old daughter, so we now watch games a family and I’ve passed my love for the Rams onto them. Trevor

I invite some friends over when I think it’s a big game. I’d like to do it every weekend but I don’t have big time fan friends. I should get other friends, shouldn’t I? Omar

I wear my jersey and go to church before the games. Miguel

What are the challenges you face as an international Rams fan?

I wouldn’t say there are too many challenges. The internet, specifically Turf Show Times and especially Twitter, have made it so much easier to find and communicate with other Rams fans, and ironically make some really good friends. If anything, I guess it’d be attending live games. It’s a journey to make it out for one and likely the only reason I haven’t attended a live game yet. Sosa

A lot of “Seahawks” fans up here, only local NFL coverage I get is for them. Also it is Canada so the only thing sports networks talk about is hockey. Nirmal

Until last year, unless you purchased Sunday Ticket you rarely got a Rams game on TV unless it was against Seattle. Partly due to the Rams being in St Louis. There is a lack of merchandise to buy in local sports stores. I can usually finds hats but it’s tough to get anything else. It gets expensive having to purchase jerseys, shirts, etc online when you have to pay exchange rates and shipping costs. And there is not any Rams fans around to watch games with. Trevor

I guess the biggest challenge was to get the visa for the very first time. The second challenge is that there are not a lot of Rams fans to share games with in Mexico. The third is to find merchandise. Omar

Do you have any friends that are into the NFL, is football popular locally where you live?

American football is very popular in Mexico City, I have a few friends but NFL events are usually sold out so we can’t go together. Omar

Yeah, very popular. We have bets every weekend. Miguel

Yes, American football is popular where I live. Pretty much everyone I know/associate with watches the NFL too. I think they all generally appreciate my fandom. Everyone comes to me with questions related to the NFL (including fantasy football). Sosa

It’s decently popular but the majority of NFL fans are bandwagon Patriots and Seahawks fans. I’m basically the NFL guy among my friends. Nirmal

NFL is extremely popular in Canada. I have family and friends that watch the NFL as well, but they all have their own teams. Within my friends, the fandom is shared by us all, but also with our own teams. My wife and parents used to think I was crazy for cheering the Rams but they’ve come around over the last few years to support my craziness. Trevor

If another team relocated to your country would you change allegiances?

Hell no, I bleed blue and gold! Nirmal

Not at all. Rams are my team and I won’t be switching. Trevor

Not at all but I may be a season ticket holder. Omar

What message do you want to share with American fans or the NFL?

Hey guys, I hope we’re entering an amazing season, not just in football but all other stuff like health, love, success, etc. I also hope I can meet some of you tailgating or sitting next to me at a Rams game. Omar

You are fortunate to have this sport. It is the best in the world. I would like to live in Los Angeles to support my team! I hope to in the future. Miguel

Canadians can be just as smart as Americans when it comes to the NFL and football in general! Sosa

I hope the NFL will make it easier for international fans to get coverage of teams other than Dallas, New England, and Seattle. Nirmal

Canada loves the NFL and we love sharing our passion with Americans. Trevor

I would like to thank all those who participated in this project and I encourage all US fans to seek out the Ramily of the world and help them connect to each other!