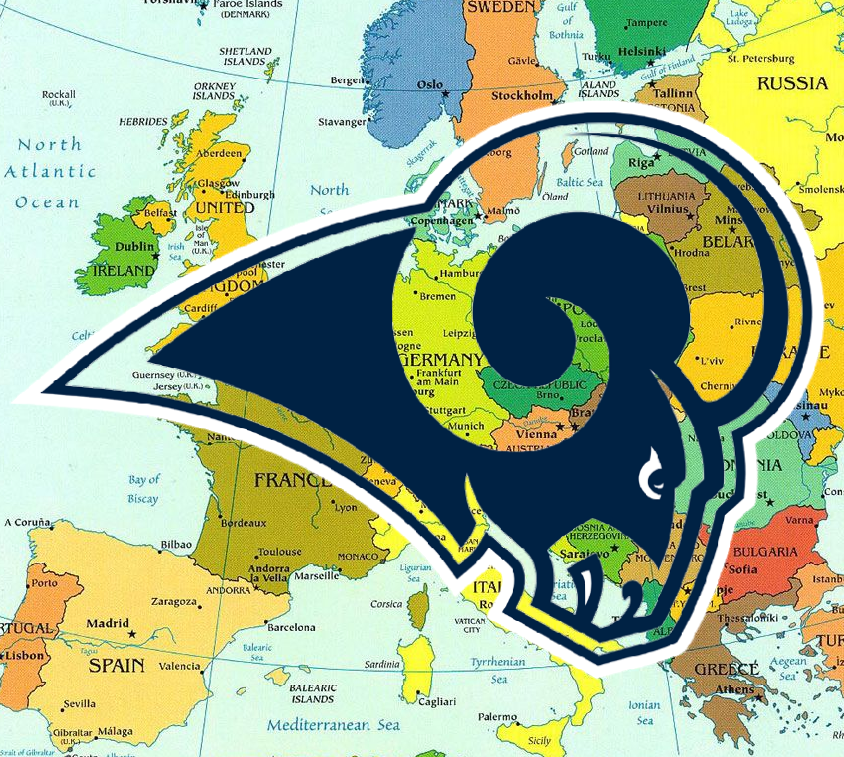 We are just days away from the season opener! I want to continue profiling our international Rams fans to get us through this week.

If you’re just tuning in:

This is the second installment of the International Rams fan Q&A. We will be hearing from three fans from three different European countries. They were the only contributors from their respective nations. I found great enjoyment reading the submissions from Pierre of France, Giovanni of Italy, and Dennis of Sweden.

They face the same challenges any European fan does. Late games, not many football friends, limited access to content, merchandise, and live events. But in Sweden, we see a slight departure from the norm.

Dennis from Stockholm explains: “The sport is really growing all over Europe. We recently had a European championship tournament! I wouldn’t say the NFL is big; Soccer and Hockey are the two major sports in Sweden. Football has some nice roots stretching back to the early 80’s and 90’s which is quite old for Europe. But it’s growing slowly. Clearly more Swedes watch the NFL nowadays. There is now access to televised games, magazines, pod casts and social networks. When I first started watching football, there was nothing.”

Dennis has built strong ties to football since his discovery of the Rams in 1999. His greatest obstacle is getting closer to the game: “I’ve coached and recruited/imported players from D1/CFL/NFL to play pro in Sweden. That takes tons of film studying, but you will only get so far scouting film. I would love to be able to attend practices, East West shrine game, or Senior Bowl for sure. I’ve always enjoyed the physicality of the sport, so not being able to attend workouts and practice is a downside.”

Dennis has truly mastered the art of a football fanatic. His game day ritual, described in what I would classify as life goals, is as follows: “Beer, herbs, a 65″ 4k curved TV. I do love to cook so I do a slow cooked, spicy meal with my best friend who is also a Rams fan.”

And just like you or I: “It’s tough to describe the hyped feelings I get, doesn’t matter if it’s the draft, preseason, regular season, or playoffs I get jacked! And with the team doing this well, I might have a small heart attack! Hah!”

Dennis is very active on Twitter, has become a contributor on this website, and is currently in a fantasy football league with me. In the age of digital takeover, fans who scraped for highlights in the 80’s and 90’s have arrived.

Pierre in Paris also discovered the Rams during Europe’s earliest exposure to football: “In the 90’s our sports television networks picked up the NFL, two or three games a week. I was so happy, the game was something new to me. But there was one team and one player that caught my eye. It was the Rams and Jerome Bettis. I never saw anything like that. That guy was better than any rugby or soccer player. I also loved Jim Everett and Henry Ellard. When the team moved to St. Louis my love grew even stronger. The franchise was always different than all the others. Then the golden years came. The Greatest Show On Turf along with Marshall Faulk, Kurt Warner, Holt, Bruce… I don’t know how to describe it. It was like nothing I had ever seen.”

Sometimes Pierre, we can’t find the words to describe the magic of that era either…

Giovanni in Cagliari, Italy reflects very similar experiences to Dennis and Pierre. First discovering the Rams early in European exposure, he saw what I would describe as a life changing film: “I watched the movie Heaven Can Wait, but I thought the Rams were a fantasy team. In 1982, Italian television began broadcasting NFL games. I saw the horns from the film and fell in love with this team.”

And Giovanni also found a way to get closer to the game: “I was a player and a coach. I know a lot of people that are football fans.”

Although Dennis has been unable to attend a live event, both Pierre and Giovanni have experienced games in London and the US.

It is endlessly important to remember why the International Series played in London means so much to so many across Europe. It is their one and only narrow opportunity to experience not only live football, but the privilege to be seated with tens of thousands who understand them.

I urge you to make an effort not to curse a London home game being assigned to the Rams and to reach out to our Ramily in Europe on social media. Let them know we see them.

Of the slight differences between these fans from completely different locations, they are generally experiencing the NFL with limited access and are as resourceful as a fanatic can be. But in one area, they are totally united. Their hatred for the New England Patriots. I’d like to thank Giovanni, Pierre, and Dennis for their contributions as I leave you with these marvelous quotes from the trio.

Giovanni:  Too many spytriots fans around me

Pierre: Brady is a cheater. Haha!

And finally, a rap from Dennis:

Brady is a cheater

Hue Jackson not a leader

Buffalo is to blame

Get Lombardi and bling bling ring!